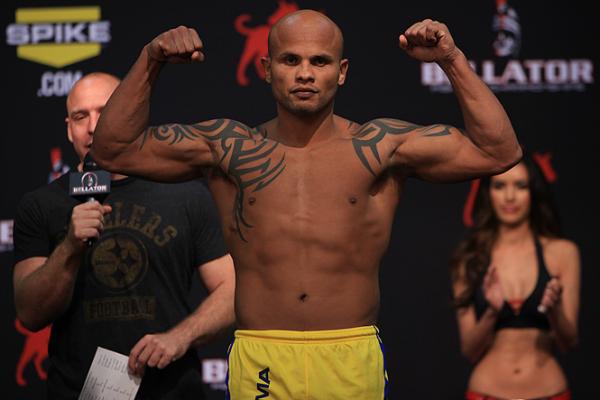 A month ago, Andreas Spang and Maiquel Falcao needed to be separated during a post-fight interview gone wrong. There will be no such need this time.

Spang and Falcao will collide in the Bellator Fighting Championships Season 6 middleweight tournament final at Bellator 69 on Friday at the L’Auberge du Lac Casino and Resort in Lake Charles, La. Theirs is an unlikely pairing given the fact that Spang was not included in the original eight-man draw. The winner will face Alexander Shlemenko for Bellator’s vacant middleweight crown.

A late replacement for the injured Bruno Santos, Spang zipped into the final when he leveled Brian Rogers in stunning fashion at Bellator 66. In the second round, Rogers rocked the Swede with a right uppercut, a searing left hook and a flurry of follow-up punches. Somehow, Sprang stayed on his feet. The 33-year-old pressed forward and countered Rogers with a left hook of his own. It found its mark. The Strong Style Fight Team representative fell backwards, his head bouncing off the canvas, and Spang pounced for the finish, as he landed one final blow for good measure.

Afterward, Falcao was brought into the cage in an obvious effort to promote his forthcoming matchup with Spang. Instead, Spang shoved the Brazilian, setting off a brief melee.

Now, the two men will throw their fists at one another when it counts. Falcao has won 12 of his last 13 bouts, punching his ticket to the 185-pound final with decision wins over Norman Paraisy and Vyacheslav Vasilevsky. The 31-year-old Renovacao Fight Team member has secured 23 of his 30 professional victories by knockout or technical knockout.

The showdown between Falcao and Spang represents but one reason to monitor Bellator 69. Here are four others:


Paired with one another in the Season 6 welterweight tournament semifinals, David Rickels and Karl Amoussou find themselves two steps shy of challenging for promotional gold.

The undefeated Rickels blew into the Final Four with a 22-second knockout against Jordan Smith at Bellator 63 in March. It was the fifth first-round finish of his career. The 23-year-old Kansan has delivered six of his 10 wins by submission, five of them via triangle choke.

Amoussou will ride a two-fight winning streak into the cage, as he looks to shed the hot-and-cold label that has trailed him for much of his career. The 26-year-old Frenchman needed a little more than two minutes to submit Chris Lozano with a rear-naked choke in the quarterfinal round. Amoussou rarely goes quietly, as he has been stopped only once in 20 professional appearances.


Not all that long ago, Megumi Fujii was the standard by which female mixed martial artists were measured. A disappointing loss to Zoila Gurgel and the emergence of fighters like Ronda Rousey and Cristiane Santos knocked some of the sheen off her star, but the 38-year-old remains a force in the 115-pound division.

Fujii returns to Bellator for the first time since her ill-fated encounter with Gurgel in October 2010 -- the lone defeat on an otherwise spotless resume. To her credit, Fujii has bounced back with three consecutive victories, including a 75-second submission, the 19th of her career, against Karla Benitez under the Dream banner on New Year’s Eve.

In her latest Bellator appearance, Fujii draws American Top Team’s Jessica Aguilar. The 30-year-old Floridian has quietly pieced together a string of four straight wins since suffering a setback of her own against Gurgel: a split decision loss at Bellator 31 more than a year ago. Aguilar has not been finished since her professional debut against Lisa Ellis ended in her submission in 2006.

From Russia With Glove


Unbeaten Russian prospect Andrey Koreshkov did not disappoint in his stateside debut, as he wiped out Tiawan Howard in 86 seconds at Bellator 63. He has faced nine men as a professional and finished all nine, seven of them inside one round. At 21 years of age, the Shlemenko protégé has the look of a star very much on the rise.

Perhaps vying for a seat in Bellator’s next welterweight tournament, Koreshkov will toe the line against Derrick Krantz on the undercard. A Texas-based welterweight, Krantz passed his first test in Bellator with flying colors, as he submitted Eric Scallan with a first-round brabo choke at Bellator 61 two months ago. His sophomore effort figures to be far more challenging.


Bellator has not had much luck with heavyweights of late, having postponed and ultimately cancelled the Season 5 tournament final between Eric Prindle and Thiago Santos. Ron Sparks and Kevin Asplund will look to put themselves on Bjorn Rebney’s radar when they square off in a heavyweight qualifier.

Eight of Sparks’ nine bouts have concluded in the first round, his Bellator 56 loss to Prindle among them. The heavy-handed Kentucky native does not waste time, as evidenced by the 17-, 24-, 36-, 50-, 67- and 84-second finishes on his resume. Asplund, meanwhile, has not lost since 2002 and will enter his first Bellator appearance on the strength of a 15-fight winning streak.