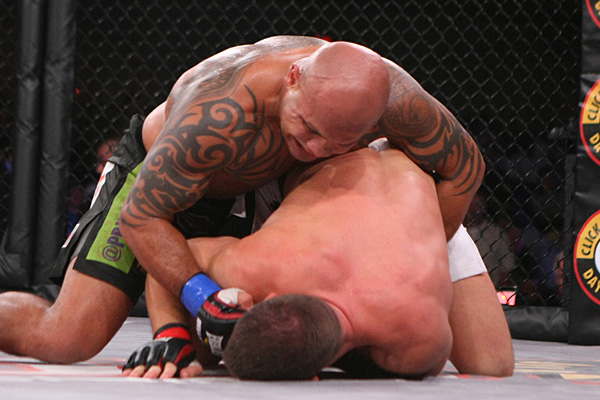 The Brazilian’s outing did not start well. Wobbled by a wicked right hook and subsequent punches in the first round, Falcao was forced to draw Spang (8-2, 1-1 Bellator) into the clinch. There, he scored the first of his eight takedowns. However, Falcao tore into the grounded Swede with an illegal knee to the head with roughly a minute remaining in round one. The blow cost him a point and threatened to alter the course of the bout.

The second and third rounds were not competitive. Falcao took down Spang repeatedly and freed himself from several attempted guillotine chokes, transitioning to his opponent’s back on multiple occasions and smashing away at him with thudding punches.

Falcao moved to full mount twice in round three, putting an exclamation point on his 13th win in 14 appearances. K. Mills
Amoussou eked it out against Rickels.

Amoussou dictated the first half of the fight with explosive strikes and beautiful throws.

However, midway through round two, the Frenchman’s pace slowed noticeably, and Rickels took command. He blasted Amoussou with heavy punches on the feet late in the second round, causing grotesque swelling to form under his opponent’s left eye.

Given new life, Rickels saved his best work for round three, where he scrambled into top position and overwhelmed Amoussou with ground-and-pound: punches, hammerfists and even double hammerfists, a la Kazushi Sakuraba. The 26-year-old Amoussou weathered the storm and, with two rounds in the bank on two of the three scorecards, walked out of the cage with his hand raised. K. Mills
Aguilar staked her claim as
MMA's top 115-pound woman.
American Top Team’s Jessica Aguilar countered effectively on the feet and held off a late surge from Megumi Fujii, as she took a unanimous verdict from the Japanese star in a showdown between two of the world’s premier 115-pound fighters.

Aguilar belted Fujii (25-2, 3-2 Bellator) with well-timed right hands and freed herself from a dangerous attempted armbar in the first round, outboxed her seasoned adversary in the second and clung to victory in the third. Fujii scored with a takedown with roughly three minutes to go in the bout and kept Aguilar pinned to the mat for the remainder of the fight. However, her inability to finish cost her in the eyes of the judges.

“This is a legend right here,” Aguilar said. “It was an honor for me to have competed against her.” K. Mills
Holata prevailed in a game
of heavyweight footsies.
Mark Holata won for the ninth time in 10 outings, as he submitted “The Ultimate Fighter” Season 10 alum Abe Wagner with a first-round Achilles lock in a heavyweight showcase. Wagner (10-6, 0-2 Bellator) verbally submitted to the hold 2:24 into round one.

Holata (12-3, 3-1 Bellator) struck for a double-leg takedown inside the first half minute of the match. Finding no luck within the Wagner guard, he transitioned to the leg. Holata defended against his foe’s weak attempt to counter, readjusted his grip and forced the submission. 
A heavy diet of takedowns and top control carried Shanon Slack to a fourth straight win, as he captured a unanimous decision over Booker Arthur in a preliminary featherweight tilt. All three cageside judges scored it the same: 30-27 for Slack (4-0, 1-0 Bellator).

Slack struck for takedowns in all three rounds and showcased a heavy top game. Arthur (2-2, 1-1 Bellator) defended well from his back, but simply could not stay upright long enough to become a factor in the fight. K. Mills
Koreshkov went into Tekken
mode on Krantz.
Undefeated Russian prospect Andrey Koreshkov kept his record spotless, as he knocked out Derrick Krantz with a third-round knee strike in an undercard bout at 170 pounds. Krantz (11-6, 1-1 Bellator) went down 51 seconds into round three.

For two rounds, the Texan kept it competitive by badgering Koreshkov (10-0, 2-0 Bellator) with clinches and takedown attempts. His successes were few, but the tactics allowed him to stay in the fight for a time. Koreshkov roared out of the gate in the third round and had his opponent on the run with some beautiful combinations. Ultimately, the 21-year-old Alexander Shlemenko protégé cornered Krantz. Another string of punches had the dazed American leaning, and Koreshkov fired the knee that brought it to a close. 
Richard Hale needed a little more than half a minute to dispatch Josh Burns in a preliminary lightweight matchup. Hale (19-4-1, 4-1 Bellator) finished it 38 seconds into round one, as he won for the sixth time in his past seven outings.

Hale wobbled Burns (6-6, 0-3 Bellator) with a jab, floored him with a series of left hands and followed the journeyman to the ground. There, Hale moved to mounted position on his foe’s back and unleashed a series of unanswered blows for the stoppage.