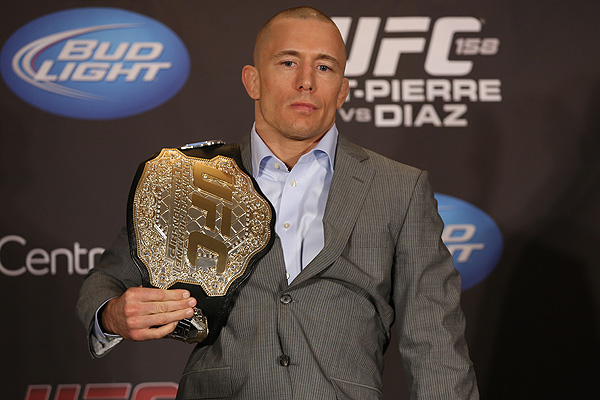 The most dominant welterweight champion in mixed martial arts history, Georges St. Pierre, spent nearly 19 months on the shelf after defeating Jake Shields at UFC 129 in April of 2011. While he was rehabbing a serious knee injury suffered in training for his next fight, GSP sat down to put his thoughts on paper, and the resulting text can be found in his new book “The Way of the Fight,” now available for sale.

St. Pierre chronicles his life and evolution as a fighter from the different viewpoints of his closest associates as well as his own. The manuscript is broken down into five books featuring his mother, fighter and good friend Kristof Midoux, trainers John Danaher and Firas Zahabi, as well as his manager, Rodolphe Beaulieu.

The majority of the book was written before GSP squared off with Carlos Condit after his long layoff and rehabilitation, but the final section, “Conscience” -- written by St. Pierre’s longtime friend Beaulieu -- was penned after his gritty win over the “Natural Born Killer.”

While the other chapters offer a glimpse of who the UFC champion is, Beaulieu and St. Pierre construct a more current portrait of the man the Canadian champion has become. It is an interesting view into the psyche of an athlete that can be both charming and outgoing while maintaining his distance as his celebrity has grown.

The varied perspectives give the book and its subject quite a bit of depth and offer the most insightful view to date of a fighter and person that has not only dominated his sport, but has been one of the foundational figures bridging the gap between MMA’s community and the greater mainstream sports audience.

To get a close-up peek at the UFC welterweight champion as you’ve never seen him before, pick up a copy of “The Way of the Fight” at your local bookseller or grab a digital edition online today.
Next Book Review: Bruce Buffer, ‘It’s Time’ »