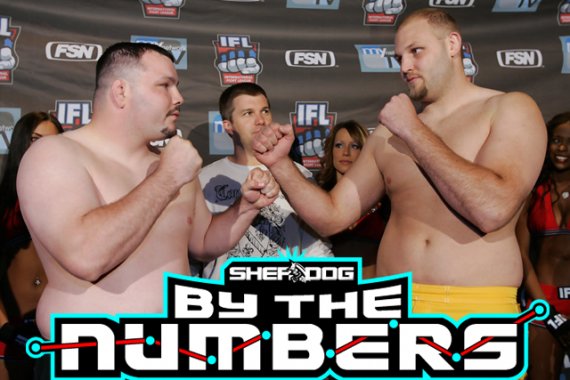 With over 450 attested and documented mixed martial arts bouts between the two, this meeting of “The Ironman” and “The Cannon” is almost certainly unsurpassed in that regard in the history of the sport. However, between the résumé of the 41-year old Fulton and the 48-year old Ritch there is a difference of degree; the durable Iowan easily outstrips the combined fight total of Ritch and the man fighting directly after them on Thursday, up-and-coming prospect Travis Wiuff (75-22).

Here is a by-the-numbers look at the storied career of the most appropriately nicknamed fighter in mixed martial arts, Travis “The Ironman” Fulton.

8: times Fulton has fought the same man, Rory Prazak. In addition to that improbable number, Fulton has fought Bryan Robinson seven times and Dan Wheatley six times, going a combined 21-0 against the unfortunate trio. In fact, the 40-fight win streak mentioned above contains seven wins over Prazak, Robinson and Wheatley alone. A heartbreaking detail is that while Robinson is 45-65 for his career and Wheatley a ghastly 2-25, Prazak is a respectable 22-25. That means his unmatched streak of futility against Fulton is the difference between a losing career record for Prazak and a winning one.

13: countries in which Fulton has fought. In addition to the United States, the ultimate road warrior has traveled to Belarus, Brazil, Canada, Croatia, Germany, Japan, Mexico, Russia, Slovakia, Ukraine, the United Kingdom and the U.S. territory of Guam.

171: times Fulton has fought in his home state of Iowa. To put that truly mind-boggling statistic into perspective, Fulton’s foe on Thursday, Ritch, is one of the 10 most prolific fighters in MMA history, and Fulton has more fights in the Hawkeye State than Ritch has total fights.

20: times Fulton has fought on back-to-back days. In the second fights of those pairs -- meaning the fights he took after having fought the day before -- Fulton is 18-2. And lest you think Fulton managed all these weekend doubleheaders by sticking around Cedar Rapids, 11 of the 20 pairs were in different states and one was in two different countries.

41: fights in 1998, Fulton’s most prolific year. Far from just grinding around Iowa, Fulton fought in nine different states that year, as well as in Japan, Canada and two separate trips to Brazil. The only time he took more than four weeks off between fights in 1998 was immediately after nearly breaking Jeremy Bullock in half at Extreme Challenge 22 in November.

267: fights to open his career without suffering a knockout loss. While Fulton had lost fights by TKO due to doctor or corner stoppage, it was not until his 268th fight, against Wiuff at Smash: MMA in November 2007 that Fulton was stopped by blows. Fulton may have more consecutive fights without a clean knockout loss than any other mixed martial artist has total fights.