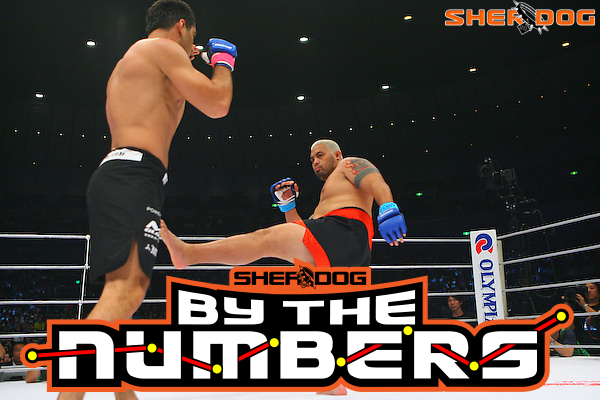 Mark Hunt’s punching power has brought him to the highest levels of combat sports.

In his eight wins in the Ultimate Fighting Championship, only one went the distance. This weekend, he will look to stretch his stoppage victories to nine as he takes on grappler extraordinaire Alexey Oleynik in front of what could be a hostile crowd in Moscow. Ahead of their UFC Fight Night 136 headliner, here’s a by-the-numbers look on “The Super Samoan.”

43: Professional kickboxing matches on his résumé. In his early years, Hunt was used by promoters as a stepping stone for their upcoming fighters but he later proved that he is of a different caliber. He tallied 30 wins overall, 13 of which came by knockout.

2: Fights in professional boxing, both in New South Wales, Australia. He defeated John Wyborn before losing to Joe Askew.

5: Straight wins after a bad start to his professional MMA debut. Hunt was stopped by Hidehiko Yoshida at Pride Critical Countdown 2004. Then, he scored consecutive victories, including split decisions over Wanderlei Silva and Mirko Filipovic.

14: Years as a professional MMA fighter. The Yoshida fight happened in June 2004 and his most recent bout was against young Curtis Blaydes at UFC 221.

8: Fights in Pride Fighting Championships, with a record of 5-3. His five straight wins in the Japan-based promotion was followed by losses to top-caliber fighters Josh Barnett and Fedor Emelianenko.

113: Significant strikes landed on Yosuke Nishijima for a landslide win at Pride 31: Unbreakable. According to Fightmetric, Nishijima only connected 43.

59: Significant strikes against Derrick Lewis’s 51, per Fightmetric. It was a closely-contested UFC Fight Night 110 encounter, until Hunt landed heavy bombs on “The Black Beast” and the fight was stopped at 3:51 of the fourth round.

2: Rounds with Fabricio Werdum for the interim UFC heavyweight championship at UFC 180. Hunt failed to sustain his early success, losing to the Brazilian by TKO at 2:27 of round 2.

2: Opportunities to hold a world title. Before losing to Werdum, he challenged for the Pride heavyweight championship then held by Fedor Emelianenko.

7: Takedowns in the UFC. While not really a big part of his arsenal, Hunt managed to score seven takedowns in his entire stay in the promotion.

4: Knockout of the Night and Performance of the Night awards. His demolition of Tuchscherer, Struve, Nelson and Mir earned him a total of $200,000 in bonuses.

3: Fight of the Night honors. His thrilling scuffles with dos Santos, Silva and Lewis made him $150,000 richer.