Thanks to back-to-back five-round decisions in his first two featherweight title defenses in the UFC, people seemed to forget about Jose Aldo’s explosive knockout power. The Brazilian reminded everyone why he is regarded as one of the world’s pound-for-pound best at UFC 142 Saturday night, snuffing out Chad Mendes’ title hopes with a knee and follow-up punches at 4:59 of the first round.

Aldo’s post-fight celebration with the crowd at the HSBC Arena in Rio de Janeiro served as memorable postscript to his in-cage dominance.

Vitor Belfort also received a warm reception, and the crowd rejoiced when the former UFC light heavyweight king tapped Anthony Johnson with a rear-naked choke in round one of their middleweight duel. Meanwhile, Edson Barboza’s star grew considerably in his homeland, as his spinning-wheel kick knockout of Terry Etim is an early front runner for knockout of the year.

While raw data might not be able to measure the passion Brazilians have for mixed martial arts, it can offer a different view of a memorable night of fights. Here’s a by the numbers look at UFC 142, with statistics provided courtesy of FightMetric.com:

6: Fights that have been finished with one second remaining in the opening round in UFC history. On Saturday, Jose Aldo joined Mike Kyle, Matt Hughes, Tim Sylvia, Lyoto Machida and Josh Koscheck as members of the 4:59 club.

7: Failed takedown attempts in seven tries for Mendes, who paid dearly for his final shot with a knee from Aldo. The featherweight champion’s takedown success rate in his UFC and WEC career is 95 percent, and only Kenny Florian, Mark Hominick and Jonathan Brookins have gotten him to the mat during that time.

13-to-11: Significant strikes by which Mendes outlanded Aldo in their short-lived scrap. It’s the only time the Brazilian has been outlanded by an opponent in his UFC and WEC career, and the 11 strikes are his least outside of the two he landed in an eight-second KO of Cub Swanson in 2009.

27: Successful takedowns by Mendes in his previous UFC and WEC appearances. An All-American wrestler in college, the Team Alpha Male product had taken each of his last six opponents down at least one time.

3: Knee-related knockouts for Aldo in 22 pro fights. Prior to his finish of Mendes, Aldo stopped Swanson with a flying knee at WEC 41 and used a knee to set up a stoppage of Roland Perez at WEC 38. 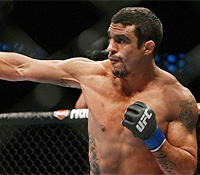 Vitor Belfort File photo
Belfort has a knack for finishing.
18: Professional fights since Vitor Belfort’s last submission victory, a rear-naked choke of Bobby Southworth in 2001. “The Phenom” stopped Anthony Johnson with the same maneuver at 4:49 of round one in their middleweight co-headliner on Saturday night. It was just the third submission triumph in 30 career bouts for Belfort.

4,838: Days since Belfort last fought in front of his countrymen in Rio de Janeiro. In 1998, Belfort defeated Wanderlei Silva by first-round TKO in his hometown -- he'll meet Silva again in Rio de Janeiro at “The Ultimate Fighter” Brazil Finale in June.

11.0: Pounds over the middleweight limit (including the one-pound allowance) for Johnson at Friday’s weigh-ins. Johnson had moved up from welterweight in part because his difficulties making weight there.

12: Combined strikes landed by Palhares in those wins over Linares, Drwal, Branch and Massenzio. By comparison, “Toquinho” landed 67 significant strikes in a decision victory over Dan Miller at UFC 134.

13: Fighters who have claimed victory in the Octagon without landing a single strike. Eleven of those came via submission, however. In his disqualification win against Erick Silva, Carlo Prater absorbed 8 significant strikes -- and 12 overall -- without landing one of his own. Darren Elkins is the only other person to win a fight in the modern era without a strike or submission -- he beat Duane Ludwig at UFC Live 1 when the Coloradoan injured his ankle and couldn’t continue.

1: Spinning wheel kick knockouts in UFC history, after Edson Barboza dropped Terry Etim with the move in the third round of their lightweight battle.

18: Significant strikes by which Barboza outlanded the rest of the evening’s main card winners. The 25-year-old featherweight connected 47 times in a little more than two rounds versus Etim, besting the combined total of strikes landed by Aldo (11), Belfort (14), Rousimar Palhares (4) and Carlo Prater (0).

665: Significant strikes landed in the UFC career of Sam Stout, good for ninth all-time in the promotion. The Canadian landed 45 of 172 power strikes thrown in his unanimous decision loss to Thiago Tavares.

5-5: Record for Gabriel Gonzaga since his head kick KO of Mirko Filipovic at UFC 70, which remains the moment for which the Brazilian is most remembered.

15:00: Average fight time in the UFC career of Michihiro Omigawa. The 36-year-old has gone the distance in each of his six Octagon appearances. Omigawa survived an armbar and a rear-naked choke to go three rounds with Yuri Alcantara on Saturday.

36: Number of significant strikes by which Alcantara outlanded Omigawa over three rounds, the largest disparity on Saturday’s card.

.600: Percentage of bouts on Saturday’s card that ended inside of a round. No bout on the pay-per-view portion of the event went to a judges’ decision.