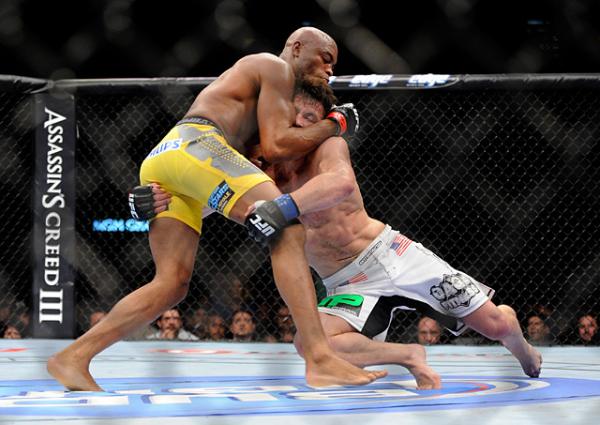 When all was said and done, Anderson Silva left no doubt about his legacy. By stopping Chael Sonnen with strikes in the second round at UFC 148 on Saturday, “The Spider” dispatched his greatest rival and solidified his spot as the promotion’s greatest champion in the process.

It didn’t look good early on, as Sonnen followed a similar game plan to the one he successfully executed at UFC 117, taking Silva down and controlling him for most of the first round. However, the Brazilian changed the tone of the fight in the second frame with a punishing knee to his opponent’s chest. With Sonnen clearly wounded, Silva went for the kill, forcing a stoppage with ground-and-pound 1:55 into the second round.

Now that you’ve seen yet another visual demonstration of Silva’s brilliance, it’s time to go deeper, with a by-the-numbers look at UFC 148, statistics courtesy of FightMetric.com.

11: Championship fights won by Silva. “The Spider” hasn’t fought in a non-title affair since moving up to light heavyweight to defeat Forrest Griffin at UFC 101. All told, only four of Silva’s 16 UFC fights were contested without a belt on the line.

.867: Finishing percentage for Silva in 16 Octagon appearances. Only Thales Leites (UFC 97) and Demian Maia (UFC 112) have managed to go the distance with the Brazilian since he joined the organization in 2006.

16: Knockdowns by Silva during his Octagon tenure, the most of anyone in UFC history. Chuck Liddell is No. 2 with 14.

10: Successful title defenses by Silva, including his second-round TKO of Sonnen. This is a promotional record. Hughes is second with seven successful defenses.

7: Knockouts in championship fights for Silva after UFC 148, the most in the history of the UFC. Chuck Liddell, Randy Couture and Matt Hughes are tied for second place with five apiece.

1: Official stoppage due to strikes in the 40-fight career of Sonnen. Previous TKO defeats to Terry Martin and Jeremy Horn came as a result of a corner stoppage and a cut, respectively.

0: Total strikes landed by Silva in the opening round of their rematch bout. Sonnen controlled the first five minutes, immediately scoring a takedown on the champion and connecting on a total of 76 strikes while in top position. It is the only time in Silva’s UFC career that he has failed to land a single strike in a round. 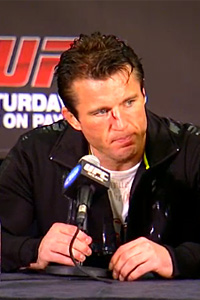 Chael Sonnen File Photo
Sonnen fell short in round two.
389: Significant strike advantage for Sonnen in 14 bouts in the UFC and WEC. Even in defeat, the Team Quest representative has never been outstruck by an opponent. On Saturday, he held a 22-to-15 edge in significant strikes against Silva.

5:00:53: Total fight time for Tito Ortiz after dropping a three-round verdict to Forrest Griffin, which allowed him to surpass B.J. Penn for the most time spent in the Octagon of any fighter.

1,279: Total strikes landed by Ortiz in his UFC career, No. 8 all-time in the promotion. The Hall of Famer landed 68 of 147 total strikes in his loss to Forrest Griffin on Saturday night.

27: Fights in the UFC for Tito Ortiz, most all-time in the Las Vegas-based promotion. The former “Huntington Beach Bad Boy” stepped into the Octagon for the first time in 1997 at UFC 13, defeating Wes Albritton before losing to Guy Mezger on the same night. Ortiz fought outside the UFC only once, a first-round triumph over Jeremy Screeton at West Coast NHB Championships in Los Angeles on Dec. 8, 1998.

204: Low kicks landed by Griffin in his career, the most in UFC history. “The Ultimate Fighter” Season 1 winner connected on 15 leg kicks in his win over Ortiz.

4: Occasions where Demian Maia has won in the UFC while landing less than 10 significant strikes, defeating Chael Sonnen (six strikes landed), Nate Quarry (two), Ryan Jensen (three) and now, Dong Hyun Kim (one). All but the victory over Kim – which came when the Korean was injured during a takedown -- have come by submission.

1,087: Days since Chad Mendes’ last knockout victory, a 44-second finish of Steven Siler at a Tachi Palace Fights event in 2009. “Money” stopped Cody McKenzie in 31 seconds at UFC 148 on Saturday.

317: Combined significant strikes thrown by Mike Easton and Ivan Menjivar in their bantamweight clash. Neither man was especially accurate, however, as both Easton (46 of 169) and Menjivar (40 of 148) landed just 27 percent of their strikes.

39: Total strike advantage for Shane Roller in the second round of his decision victory over John Alessio. The Team Takedown representative used back control to outstrike his opponent 43 to 4 in the frame.