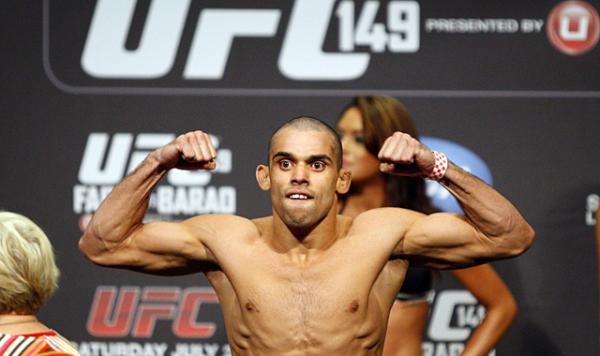 For the most part, the UFC 149 pay-per-view card was not one for the record books. Don’t tell that to Renan Barao, however, as the Brazilian cruised to a five-round unanimous decision over Urijah Faber to earn the promotion’s interim bantamweight crown on Saturday night, spoiling the possibility of a Faber-Dominick Cruz rubber match.

While much of the evening’s main card was set to the boos of those in attendance at the Scotiabank Saddledome in Calgary, Alberta, the preliminary offerings featured plenty of thrilling moments, including a trio of first-round knockouts. Not every event is guaranteed to be compelling theater, but there are still plenty of statistics to examine. Here is a by-the-numbers look at UFC 149, with statistics courtesy of FightMetric.com.

30: Consecutive fights without a loss for Barao, who defeated Faber to capture the UFC interim bantamweight championship on Saturday night. The Nova Uniao standout’s only loss came at the hands of Joao Paulo Rodrigues de Souza in his professional debut.

20: Leg kicks landed by Barao, twice as many as Faber. The Brazilian did the most damage to his opponent’s legs in the middle rounds, landing 17 leg kicks in rounds two, three and four combined. By comparison, Jose Aldo outlanded Faber 27 to 1 in leg strikes in their featherweight title clash at WEC 48.

0: Takedowns in six attempts for Faber. The entire fight was contested on the feet, with neither bantamweight landing a single strike on the mat.

11: Title fights for Faber in his UFC and WEC career. After winning his first six championship bouts, “The California Kid” is 0 for his last 5 in contests with a belt on the line.

1-4: Faber’s record in five round fights – the Californian’s lone victory came against Jens Pulver at WEC 34, while he has fallen to Mike Thomas Brown, Jose Aldo, Dominick Cruz and Barao in 25-minute affairs.

Hector Lombard File Photo
Lombard was unimpressive.
54: Significant strikes by which Hector Lombard has been outlanded in his three career defeats. The former Bellator middleweight champion was outlanded by 28 significant strikes a split-decision setback to Tim Boetsch on Saturday night. “Lightning” was outlanded by Gegard Mousasi (36 to 16) and Akihiro Gono (39 to 33) in previous losses.

.580: Career significant striking accuracy for Cheick Kongo, tying him with Randy Couture for fourth all-time among UFC fighters. Though his bout with Shawn Jordan didn’t feature an abundance of striking action, the Frenchman was his usual accurate self, landing 38 of his 56 significant strikes (68 percent) against the former LSU fullback.

14: Failed takedown attempts by Brian Ebersole against James Head. The Tiger Muay Thai representative executed his only successful takedown in 15 attempts in round two en route to falling via split decision.

5: Takedowns landed by Matt Riddle in his submission triumph against Chris Clements. It was the most takedowns by “Deep Waters” since he landed five in a victory over Dante Rivera at the “TUF 7” Finale in his UFC debut.

.667: Percentage of bouts (4 of 6) on the UFC 149 undercard that resulted in a finish. By comparison, just one of the five main card tussles avoided going to the judges.

40: Significant strikes by which Court McGee outlanded Nick Ring in his contentious unanimous decision defeat to “The Promise.” McGee outlanded his opponent in rounds two (32 to 25) and three (53 to 16), but all three judges saw the contest 29-28 in favor of Ring.

7: Seconds needed by Ryan Jimmo to knock out Anthony Perosh in a 205-pound clash, tying him with Todd Duffee for fastest official knockout in UFC history [Duane Ludwig’s KO of Jonathan Goulet is listed by the Nevada Athletic Commission at 11 seconds]. The longtime Maximum Fighting Championship veteran floored his Australian opponent with a right hand to earn his 17th consecutive win.

2: Strikes landed by Jimmo. By comparison, Duffee landed five strikes in his knockout of Tim Hague at UFC 102, while Ludwig needed just one strike to finish Goulet.

23: Career submission wins between Bryan Caraway and Mitch Gagnon. “The Lightning Kid” forced Gagnon to tap out to a rear-naked choke in a bantamweight bout.

36: Advantage in total strikes for Caraway in rounds two and three. In the opening frame, the “TUF 14” alumnus outlanded his opponent 25 to 24. However, Gagnon landed 16 more significant strikes than Caraway over the course of the bout.