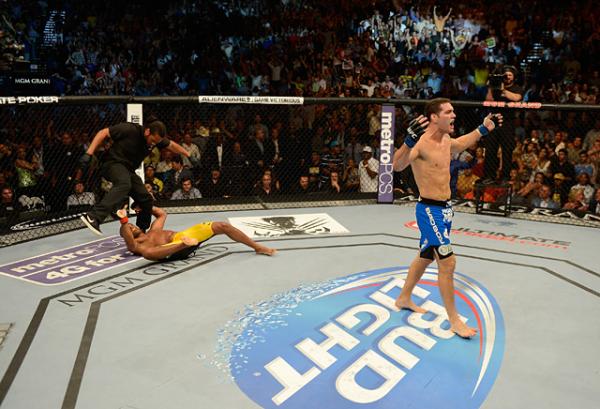 
It was a night mixed martial arts fans won’t soon forget. Anderson Silva, winner of 17 straight fights, with 10 consecutive title defenses in the Octagon to his credit, finally looked mortal, and it was Chris Weidman, a hungry young challenger from New York, who accomplished the feat. The Brazilian champion taunted Weidman early and often at UFC 162, but his disregard for the Serra-Longo Fight Team product’s skills cost him dearly in the second round.

It was there that Weidman caught Silva with a left hook and follow-up strikes on the ground 1:18 into the frame to become the UFC’s sixth middleweight king. While Silva has been promised an immediate rematch if he so desires, it is currently unclear if “The Spider” is interested in pursuing championship gold once again. Before speculation about the futures of Silva and Weidman reaches a fever pitch, let us take one more look back. Here is a by-the-numbers look at UFC 162, with statistics courtesy of FightMetric.com.

2,724: Days since Silva’s last defeat, a disqualification loss to Yushin Okami due to an illegal kick at Rumble on the Rock 8.

5: Significant strikes landed by Weidman in the second round, when he finished a clowning Silva 1:18 into the period.

26: Total strikes landed by Weidman overall. The Serra-Longo Fight Team member outlanded Silva 21 to 15 in the opening frame, when he also landed the bout’s only takedown. In the second period, both men landed five strikes apiece.

10: Title defenses for Silva, still the most in promotion history.

46: Takedowns landed by Edgar in his 15-bout UFC career, tying him with Randy Couture for No. 8 on the promotion’s all-time list. “The Answer” went 2-for-5 on takedowns against Oliveira.

1,309: Days since Edgar last competed in a non-title bout, a second-round submission of Matt Veach at “The Ultimate Fighter 10” finale.

5: Takedowns, landed in 10 attempts by Mark Munoz in his unanimous decision victory over Tim Boetsch. Munoz’s career takedown rate in the UFC is 27 percent.

.322: Significant striking accuracy for Swanson in the first two rounds, when he landed 20 of 62 attempts.

34: Significant strikes by which Craig outlanded Leben. The Texan took over the bout in rounds two and three, outlanding “The Crippler” 49 to 17 in the final 10 minutes. Craig also defended all seven of Leben’s takedown attempts.

10: Wins by knockout, technical knockout or submission for Gabriel Gonzaga. Only Frank Mir -- with 11 such triumphs -- has more among UFC heavyweights.

3: Career victories via leg-kick TKO for Edson Barboza, who battered the leg of Rafaello Oliveira to earn a second-round stoppage in their lightweight bout. Barboza also used leg kicks to defeat Mike Lullo (UFC 123) and Marcelo Giudici (Ring of Combat 30).

7: Knockouts that have occurred at the 4:59 mark of round one in the UFC after Brian Melancon’s stoppage of Seth Baczynski. Although Yves Lavigne didn’t appear to halt the bout until after the first round’s conclusion, the official time of Melancon’s victory was 4:59.