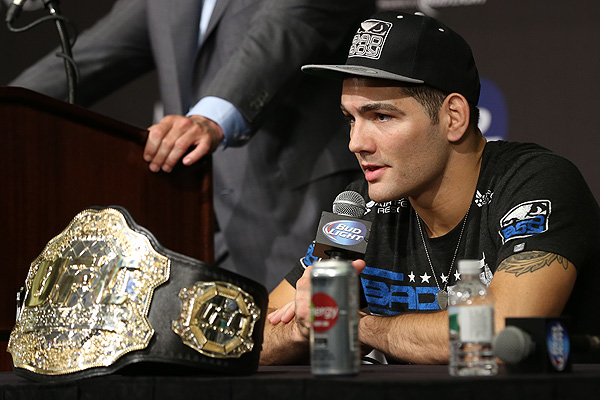 Chris Weidman clobbered Anderson Silva with a left hook to the head July 6 at UFC 162, but that wasn’t exactly the game plan.

On the challenges behind Weidman’s win: “When I started doing interviews the week before the fight, somebody brought that up to me. They said he hasn’t fought for a year. He had an injury, Hurricane Sandy. He was financially destitute. I actually started getting worried. I [had never given] it any thought. You’re kind of in the moment and you’re going to do what you have to do, but when I finally relaxed right before I was leaving for Vegas, I was even going to myself, ‘Wow, this is something else.’

“I didn’t even realize the obstacles while we were in there. We were just training and we were confident, but man, that’s some heavy stuff this kid had to go through. But again, I think it goes to show you and it defines his character and who he is. What makes him really special is I honestly believe [Silva] was the best pound-for-pound fighter there is. It’s not like [Weidman] just went in there and had a big win; he beat the best guy ever, up until this point.”

On whether they discussed what to do if Silva taunted Weidman: “A hundred times. We had a couple of scenarios. Once he started leaning and doing that stuff, we were going to attack the body or if you felt that he was drawing you in too much, we were just going to take a step back, walk away for two seconds and then refocus and start trying to go forward, pressure again and suffocate him. But that was talked about every week for sure. As goofy as it was, I tried to do an Anderson Silva imitation and I had some other guys try to imitate him. We were well prepared for it, but you never know until you get in there and you actually have Anderson Silva standing in front of you and he’s doing that.”

On planning to attack Silva’s body: “There was a huge emphasis placed on the body, but [Weidman] didn’t really miss his head all that much. I think that’s why you didn’t see it.”

On training to punch the body: “I had the belly pad on for two months and [Weidman] was literally beating the crap out of me. If it would have got to the point on the inside, he’s a vicious body puncher. … I think if he would have missed with that hook, you would have saw him probably go back to the body, but he found success with it.”

On whether he thought Silva was faking or was really hurt: “I thought that he’d hurt him. I knew that. You can’t fake falling down like that, and then when he bounced his head off the canvas, I was like, ‘Wow,’ because [Weidman’s] got killer instinct. He’s a finisher, and there was no way that guy was going to survive after that happened.”

On his reaction to the win: “I think my first reaction was, Man, I love this kid. He talks the talk. He walks the walk. He puts in the time brick by brick. He just is a hard worker. He’s a throwback to the old days. He’s a grinder. … It was a crazy time. I think I kind of blacked out, but it was just great. I think it was just the culmination of everything you believe coming to fruition. As a coach, I think there’s coaches out there that just would give anything or they live their life for that moment. Luckily, I’ve had two of them. For me, it was just a great feeling.”

Listen to the full interview (beginning at 56:48).