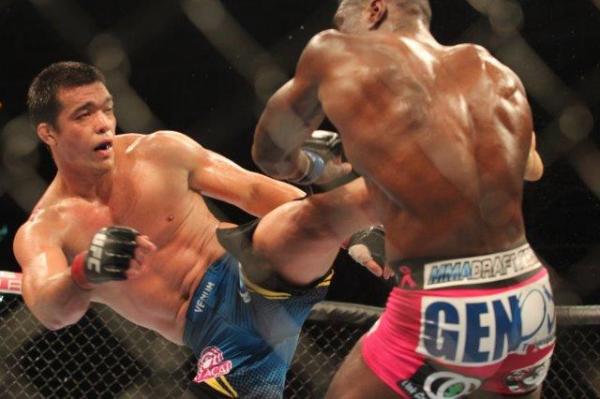 Lyoto Machida was baffled by the judges' decision against Phil Davis at UFC 163. | Photo: Gleidson Venga/Sherdog.com


Jose Aldo wasn’t his usual dominant self at UFC 163, but he didn’t have to be. After three workmanlike rounds against challenger Chan Sung Jung, the Brazilian capitalized on a shoulder injury suffered by “The Korean Zombie” in round four to earn a technical knockout victory 2:00 into the period at the HSBC Arena in Rio de Janeiro. Jung, who was unable to stop Aldo’s takedowns during the first 15 minutes, appeared to separate his shoulder throwing a punch in round four, giving the champion all the opening he would need. Aldo has not lost a fight since November 2005.

In the co-main event, Phil Davis took a contentious decision victory over Lyoto Machida, presumably putting an end to “The Dragon’s” hopes of earning another shot at light heavyweight king Jon Jones. “Mr. Wonderful” landed takedowns at the end of rounds one and two, which might have been enough to give him the nod in the eyes of the cageside judges.

While it probably wasn’t the most satisfying fight night on record, UFC 163 still deserves of closer statistical examination. Here is a by-the-numbers look at Saturday’s card, with statistics courtesy of FightMetric.com.

10: Total takedowns landed by Aldo in UFC title defenses against Jung and Mark Hominick. The Nova Uniao standout was five for nine on takedowns against Hominick and five for six against Jung. Aldo has landed just one takedown in his other 11 UFC and WEC bouts combined.

15: Significant strikes by which Aldo outlanded Jung. The featherweight champ outlanded Jung in every frame but the third. However, total strikes were much closer, as Aldo only held a 43-to-42 advantage in that category.

19: Total strikes by which Jung outlanded Aldo in round three. “The Korean Zombie” outlanded the Brazilian 26 to 7 in the frame.

1,354: Length of Aldo’s title featherweight title reign, beginning from when he first captured the strap against Mike Thomas Brown at WEC 44. Aldo has since made seven successful defenses, including his victory over Jung on Saturday night.

29: Total strikes landed by Davis, two more than Machida did in their light heavyweight bout. Davis outlanded Machida 12 to 10 in round one and 11 to 7 in round two, while “The Dragon” held a 10 to 6 edge in the final frame.

24: Combined strikes to the body (15) and legs (9) landed by Davis. Meanwhile, Machida landed 15 strikes, including 11 to the body and four to the legs.

8: Takedowns defended, in 10 attempts by Machida. Davis landed one of two takedowns in round one, one of four in round two and failed on all four attempts in round three. Machida’s career takedown defense is 79 percent, while Davis’ career takedown accuracy is 42 percent.

5: Takedowns landed by Thales Leites in his unanimous decision victory over Tom Watson, the most the Brazilian middleweight has landed in nine UFC appearances. Leites went five for nine on takedowns, attempted three submissions and passed guard six times in the victory.

1: Technical knockout defeat in 39 professional fights for Jose Maria Tome, who was stopped by strikes for the first time in his career by John Lineker. “Hands of Stone” landed a series of unanswered shots on the ground to put an end to Tome’s UFC debut 1:03 into round two.

21: Total time, in seconds, of Anthony Perosh’s last two UFC outings. After being knocked out by Ryan Jimmo in seven seconds at UFC 149, “The Hippo” rebounded to stop Vinny Magalhaes in 14 seconds, the third fastest knockout in UFC light heavyweight history.

2,408: Days since a fight involving Perosh last went the distance, when the Australian lost a unanimous decision to Christian Wellisch at UFC 66. Only two of Perosh’s 21 career fights have gone to judges, and all 14 of his triumphs have come via knockout or submission.

10: Total significant strikes landed by Sheila Gaff in two UFC appearances, both first-round TKO defeats. A noted striker outside of the Las Vegas-based promotion, Gaff had won three consecutive fights by KO or TKO prior to her Octagon debut. Gaff was stopped by Amanda Nunes with punches and elbows 2:08 into round one of their bantamweight encounter.

5: Triangle submissions from mount in UFC history. Sergio Moraes become the fifth such fighter to pull the feat on Saturday, eliciting a tapout from Neil Magny 3:13 into the opening frame of their welterweight encounter.

49: Significant strikes by which Ian McCall outlanded Iliarde Santos to earn his first flyweight victory in the UFC. “Uncle Creepy” outlanded his Brazilian foe 34 to 12 in round one, 31 to 16 in round two, and 27 to 15 in round three.

43: Leg kicks landed by McCall, tying him for the fourth most ever landed in a UFC bout.