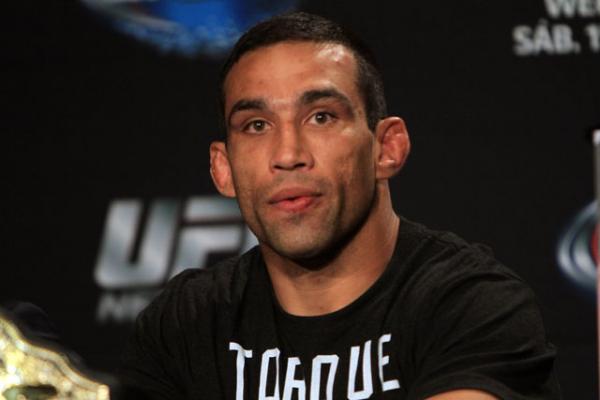 
When news broke a few weeks back that Cain Velasquez was out of UFC 180 with a knee injury, it put a serious damper on the Ultimate Fighting Championship’s first-ever trip South of the Border. In the meantime, Fabricio Werdum -- a Brazilian fluent in Spanish -- took it upon himself to become Mexico’s adopted son. Now, in addition to a new legion of fans, “Vai Cavalo” has some shiny hardware, as he captured the interim heavyweight title with a second round technical knockout of Mark Hunt in the UFC 180 headliner in Mexico City on Saturday night.

Hunt was game as a short-notice opponent, even dropping Werdum with punch early in the opening frame. However, the Kings MMA product caught Hunt with a perfectly timed knee in the second round, and sealed the victory with punches and hammerfists on the canvas 2:27 into the period.

A date with Velasquez, the reigning heavyweight king, still looms for Werdum as soon as the American Kickboxing Academy product returns to health. Here is a by-the-numbers look at UFC 180, with statistics courtesy of FightMetric.com.

5: Consecutive wins for Werdum, tying him with Andrei Arlovski -- whose streak is over two separate promotional tenures -- for longest active streak in the UFC’s heavyweight division.

6: Career knockdowns in UFC competition for Hunt, who floored Werdum early in their fight to move past Heath Herring and into a tie with Frank Mir for No. 8 all-time among heavyweights in the promotion. Roy Nelson, Matt Mitrione and Gabriel Gonzaga are tied for No. 5 with seven knockdowns.

386: Significant strikes landed by Werdum in the Octagon, No. 7 among all UFC heavyweights just behind Joey Beltran (388) at No. 6.

0: Takedowns landed, in three attempts, by Werdum. Heading into UFC 180, Hunt’s takedown defense rate of .830 ranked No. 2 among all heavyweights in the promotion behind Arlovski (88.4 percent).

25: Days since Velasquez withdrew from the UFC 180 headliner against Werdum with a knee injury. The reigning heavyweight king hasn’t not competed since besting Junior dos Santos at UFC 166 in October 2013.

1,694: Days since the last UFC interim heavyweight title fight, when Shane Carwin knocked out Frank Mir 3:48 into the first round at UFC 111.

4: Consecutive welterweight wins for Kelvin Gastelum, the second longest active streak in the division behind Neil Magny, who has won five straight. Gastelum submitted Jake Ellenberger with a rear-naked choke 4:46 into the opening frame on Saturday night.

1: Takedown landed by Gastelum against Ellenberger, the first takedown “The Juggernaut” has surrendered in UFC competition since a split-decision loss to Carlos Condit in his promotional debut in 2009.

4: Finishes for Ricardo Lamas in UFC competition, second most in the featherweight division behind Dustin Poirier’s five. Lamas tapped out Dennis Bermudez with a guillotine choke 3:18 into the initial stanza of their 145-pound bout, ending “The Ultimate Fighter 14” veteran’s seven fight winning streak.

2: Points deducted from Jose Quinonez by referee John McCarthy for what was deemed a flagrant headbutt landed on Alejandro Perez in the third round. Perez would go on to capture a unanimous verdict and “The Ultimate Fighter: Latin America” bantamweight crown.

52: Significant strikes which Jessica Eye outlanded Leslie Smith in their women’s bantamweight clash, which was stopped 1:30 into round two due to Smith’s injured ear. “Evil” Eye held an 80-to-28 advantage in significant strikes overall.

55: Significant strikes to the head landed by Eye. By comparison, Smith landed 21.

5: Submissions attempted by Gabriel Benitez in his victory over Humberto Brown Morrison. The last of those attempts, a guillotine choke, rendered Brown unconscious 50 seconds into the third frame.

12: Fighters, of the 22 on Saturday’s card, who were making their professional debut at UFC 180.