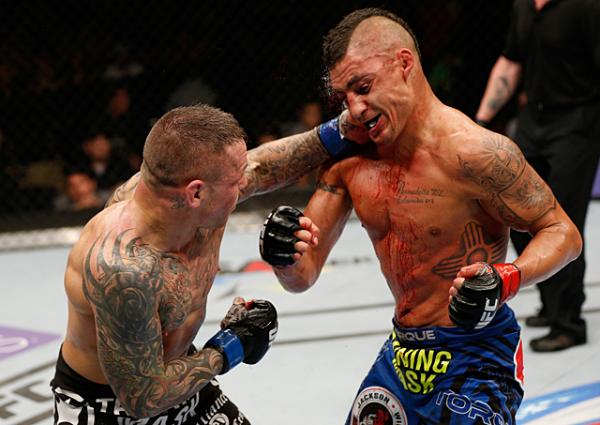 Most observers felt that Ross Pearson was robbed of a clear win. | Josh Hedges/Zuffa LLC/Getty Images


Benson Henderson sent a message to the rest of the lightweight division: Not only is he a serious contender, but he still knows how to finish fights.

After three back-and-forth rounds against the rising Dagestani talent Rustam Khabilov in the UFC Fight Night “Henderson vs. Khabilov” headliner, the former 155-pound champion put his stamp on the match in a matter of moments. In round four, “Smooth” put Khabilov on his heels with a two-punch combination, and then deftly took his opponent’s back. Shortly thereafter, Khabilov was forced to tap out, giving the MMA Lab standout his ninth Octagon triumph.

Earlier, New Mexico natives Diego Sanchez and John Dodson kept the home folks happy, albeit via two very different methods. Sanchez captured a highly controversial split verdict over Ross Pearson in the lightweight co-feature, while Dodson strengthened his candidacy for another flyweight title shot with a TKO of John Moraga. Here is a by-the numbers look at UFC Fight Night “Henderson vs. Khabilov, with statistics courtesy of FightMetric.com.

6: Takedowns landed, in 10 attempts, by Khabilov, more than anyone has landed against Henderson in UFC/WEC competition.

587: Significant strikes landed by Henderson, No. 7 among all lightweights.

965: Total strikes landed by Henderson, No. 8 among UFC lightweights

15: Fights for Sanchez that have gone the distance in UFC competition, more than anyone in UFC history. The New Mexico native is 9-6 in those contests.

18: Significant strikes by which Pearson outlanded Sanchez. The British fighter outlanded his foe 13 to 8 in round one, 17 to 13 in round two and 21 to 12 in round three. Additionally, Pearson landed the only takedown of the fight.

13: Media scorecards, out of the 13 tracked by MMADecisions.com, that scored the lightweight fight in favor of Pearson. Twelve of those scorecards had it 30-27 in favor of “The Real Deal.”

3: KO/TKO finishes for Dodson, tying him with Joseph Benavidez and John Lineker for most of any UFC flyweight. A knee to the body followed by a barrage of follow-up strikes on the ground got the job done for “The Magician” against John Moraga. The bout was stopped between rounds two and three by the cageside doctor as a result of damage done to Moraga’s nose.

6: Knockdowns landed by Dodson in his UFC career, tying him for No. 1 with John Lineker among all flyweights.

65: Total strikes by which Piotr Hallmann outlanded Yves Edwards en route to tapping the “Thugjitsu Master” with a rear-naked choke 2:31 into round three. Hallmann had notable advantages working the body, outlanding Edwards 23 to 9 in significant strikes to the body and 17 to 0 on the ground.

3: Submissions for Bryan Caraway as a UFC bantamweight, one behind Urijah Faber for most in the division. Caraway, who tapped Erik Perez with a rear-naked choke at the 1:52 mark of round two, has four submission victories in the Octagon overall, but one of those came at 145 pounds.

4: Consecutive losses in the UFC for Bobby Voelker, tying him with Charlie Brenneman and Frank Mir for longest active losing streak in the promotion.

10: Takedowns landed, in 15 attempts, by Scott Jorgensen in his unanimous decision triumph over Danny Martinez, the most of his UFC/WEC tenure. His previous best of seven takedowns landed came in a unanimous verdict over Kenji Osawa at WEC 35.

994: Days since Lance Benoist’s last triumph inside the Octagon, a unanimous decision over Matt Riddle at UFC Fight Night 25. In his first fight in nearly two years, Benoist captured a unanimous verdict over Bobby Voelker in a middleweight clash.

115: Total strikes landed by debuting lightweight Jake Lindsey over the first two rounds of his bout against Jon Tuck, who, by comparison, landed 59 over that same period of time. However, Tuck held a 27-to-2 edge in total strikes in the final frame prior to earning the tapout due to heel strikes.