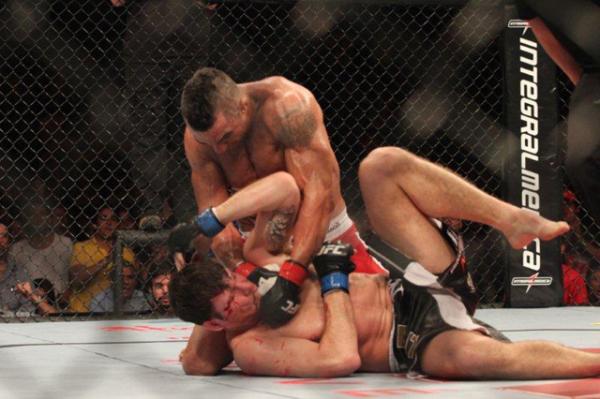 Vitor Belfort won for the first time outside of the opening round in the UFC. | Photo: Gleidson Venga/Sherdog.com


He took longer than he usually does in victory, but Vitor Belfort ruined Michael Bisping’s golden opportunity. Heading into the UFC on FX 7 headliner, Bisping needed but one more victory to attain a shot at Anderson Silva’s middleweight gold. A left head kick -- punctuated with a series of hammerfists on the ground -- from “The Phenom” altered those plans.

Now Bisping goes back to the drawing board in the middleweight division, while the 35-year-old Belfort, one fight removed from a light heavyweight title loss to Jon Jones, appears to have several interesting options ahead of him. Many believed that the Brazilian’s chances for victory diminished significantly once the opening frame expired, but the former UFC 205-pound king proved the doubters wrong. Here is a by-the-numbers look at UFC on FX 7, with statistics courtesy of FightMetric.com.

1: UFC victory in fights that have gone past the opening frame for Vitor Belfort, who knocked out Michael Bisping with a head kick at 1:27 of the second round. All of Belfort’s previous 10 Octagon triumphs came inside of a round.

18: Significant strikes landed by Belfort on Saturday night, the most he has landed in any Octagon triumph. 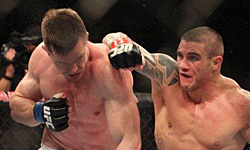 G. Venga/Sherdog.com
Dollaway weathered the storm.
5-0: Record in bouts that go the distance for C.B. Dollaway, who captured a split decision over Brazilian Daniel Sarafian in a middleweight scrap. Four of those triumphs have come inside the Octagon for the Power MMA representative.

.950: Percentage of Gabriel Gonzaga’s fights that have avoided going to the judges’ scorecards. All 14 of Gonzaga’s career victories, including his second-round submission of Ben Rothwell, have ended via knockout or tapout, while five of his six defeats have come by way of KO or TKO. “Napao” has only gone the distance once, against Brendan Schaub at UFC 121.

1-2: Record for fighters who were unbeaten heading into UFC on FX 7 on Saturday night. Only Khabib Nurmagomedov was able to keep his perfect record intact, stopping Thiago Tavares inside of a round. Both Andrew Craig and Lucas Martins saw their unblemished marks fall at the hands of Ronny Markes and Edson Barboza, respectively.

68: Total strikes by which Andrew Craig outlanded Ronny Markes during their middleweight tilt. In round one, Markes held a 21-to-15 advantage in total strikes. The Brazilian landed just seven strikes over the contest’s final 10 minutes, but he also scored the only two takedowns of the bout en route to taking a unanimous decision.

11: Decisions in his last 11 fights for Diego Nunes, who dropped a unanimous verdict to Nik Lentz in their featherweight clash. Nunes’ streak of going the distance began at WEC 37, when he earned a decision triumph over Cole Province. The Brazilian is 7-4 during that time.

205: Total strikes landed by Lentz, 186 more than Nunes. The Minnesotan also successfully landed 10 of his 21 takedown attempts in the contest.

11: Bouts in the past 294 days for UFC debutante Lucas Martins, who tapped to strikes in the first round of his lightweight matchup with Edson Barboza. Martins went 10-0 in 2012.

10: Brother combinations to have fought in the UFC after Ildemar Alcantara -- brother of Iuri -- made his Octagon debut with a second-round kneebar submission of Wagner Prado. Later, Iuri Alcantara’s bout with Pedro Nobre was ruled a no contest after it was determined he landed illegal strikes to the back of Nobre’s head.