ALBUQUERQUE, N.M. -- Andrei Arlovski does not have much use for shades of grey.

When the Belarusian submitted Tim Sylvia to capture the interim heavyweight title at UFC 51 six years ago, he was in the midst of a six-fight winning streak in which he finished all but one of his opponents inside of the first round. Life was good. Knockouts accumulated, fangs flashed and Arlovski was generally regarded as one of the best heavyweights in the world. Back-to-back losses to Sylvia followed, and the World Sambo Championship silver medalist has been chasing his old mystique ever since.

While recently on his way to catch a flight out of Chicago to Albuquerque, N.M., to train at Jackson's Mixed Martial Arts -- the third such journey of his career -- the Affliction veteran received a bitter reminder of his current standing.

“My girlfriend drove me to the airport and stopped by Starbucks,” he says. “A guy came to me and said, ‘You’re Arlovski … a good fighter.’”

It was not intended as an insult, but the 32-year-old received a different message.

“I was so mad because, before, people told me I was the s--t, he was the best, you know? Just a good fighter? I have only white or black, I don’t want the grey. Everything or nothing,” Arlovski says. “I was very mad about it. That’s why I came and trained hard.”

Arlovski hopes the dedicated training will pay off, as he faces Sergei Kharitonov at Strikeforce/M-1 Global “Fedor vs. Silva” on Saturday at the Izod Center in East Rutherford, N.J. The bout will serve as one of four quarter-finals in the Strikeforce heavyweight grand prix. Seeds have not been assigned to the eight fighters scheduled to compete in the tournament, but it goes without saying that the former UFC champion will not be favored in a bracket that includes Fedor Emelianenko, Fabricio Werdum, Josh Barnett and current Strikeforce heavyweight champion Alistair Overeem. 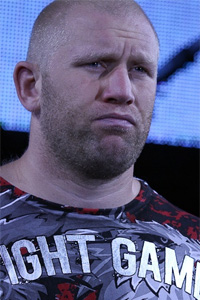 “He’s a tough fighter, no doubt,” Arlovski says. “I had a promotion tour to New York for this tournament. Somebody interviewed me, and he called me at the time the underdog. No problem. [Kharitonov] has heavy hands; he’s tough. I have to focus on his weapons and be ready for this.”

Arlovski enters the grand prix on the heels of a three-fight losing streak that has called everything from his dedication to his chin into question. While revisiting each setback, he is able to pinpoint what caused him to lose focus.

In his January 2009 first-round knockout loss to Emelianenko, it was the crowd.

“I saw that my kicks and my punches hurt him, and, for some reason, I jumped because people started screaming ‘Pit Bull,’” Arlovski says. “It was cool when I did the flying knee against Ben Rothwell [at Affliction ‘Banned’], but it doesn’t work against Emelianenko.”

When Brett Rogers shocked him via 22-second TKO at Strikeforce “Lawler vs. Shields” five months later, his mind was divided between the cage and the sweet science.

“No doubt he knocked me out,” Arlovski says. “He’s tough. He’s dangerous. I didn’t focus on that fight because my mind was on my pro boxing debut. I paid for this.”

In his most recent outing, against Antonio Silva at Strikeforce “Heavy Artillery” in May, “The Pit Bull” failed to register much in the way of offense, but he was able to absorb several significant punches in the opening round. Although Arlovski went on to lose a unanimous decision, he feels he silenced at least a few who doubted his ability to take a hit.

“He landed a couple good right hands on my chin. I hope I shut some mouths who said that I have a weak chin,” he says. “I lost that fight, but I’m pretty much happy about it because I saw some improvement and I saw my mistakes.”

During the Albuquerque leg of Arlovski’s training camp, stand-up coach Mike Winkeljohn has focused on getting the talented striker to utilize his speed, as well as his power. Working with light heavyweights like Rashad Evans and Jon Jones has only served to intensify the camp’s emphasis.

“Andre’s that guy that’s an incredible athlete that for some reason his last couple fights he has stopped using his athleticism,” Winkeljohn says. “And he was standing in front of his opponent. He’s got some great quickness, so we’re definitely working on a lot of footwork drills, working on his speed and getting him to attack the angles. If Andrei gets his head on straight, he can go with just about anybody out there.”

“
Andre’s that guy
that’s an incredible
athlete that for
some reason his last
couple fights he has
stopped using his
athleticism.

As both Wineljohn and Arlovski have mentioned, sometimes the 23-fight veteran lacks the focus necessary for sustained success.

When his mind centers on performing in the cage, the returns can be fruitful. Before his current losing stretch, Arlovski knocked out Roy Nelson; it remains the only time “Big Country” has been finished by strikes in his career.

Arlovski sounds adamant when he speaks of wanting to return to the upper echelon of heavyweights in MMA, but he also expresses interest in boxing and K-1 ventures.

“If he fights the way he performs in the gym, he should have a good night,” said Greg Jackson, who will be in Arlovski’s corner for the first time since the Belarusian began training in his acclaimed dojo.

With the three opponents who are responsible for his losing streak all a part of the heavyweight field in the Strikeforce grand prix, Arlovski should not lack for motivation.

“It’s unfinished business for me,” he says. “The tournament is a great opportunity, but one step at a time. First, I have to face Kharitonov, and we’ll see what happens after.”