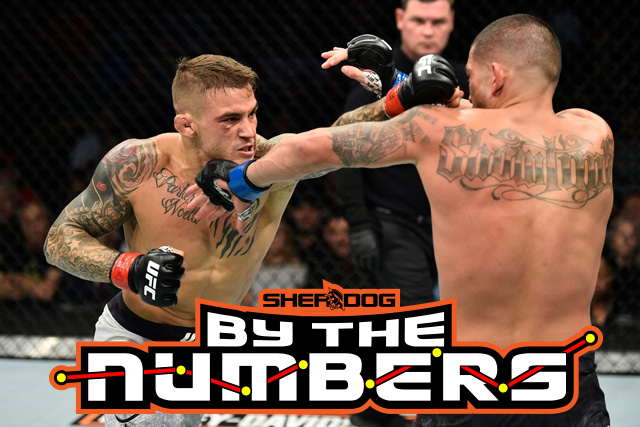 The first rematch of Dustin Poirier’s career may be his most important fight to date, as he aims to inch closer to a shot at the Ultimate Fighting Championship lightweight crown. The American Top Team standout on Saturday will meet former champion Eddie Alvarez in the UFC on Fox 30 headliner at the Scotiabank Saddledome in Calgary, Alberta.

Their first encounter ended in a no-contest at UFC 211 -- an anticlimactic conclusion to an otherwise entertaining showdown. Out the window flew a potential win bonus, a chance at a performance bonus and an improved ranking at 155 pounds.

As Poirier closes in on the rematch, here are some of the numbers that have come to define the Lafayette, Louisiana, native:

174: Significant strikes landed in Poirier’s win over former World Series of Fighting champion Justin Gaethje at UFC on Fox 29, per FightMetric. Gaethje landed 115. As expected, the two brawlers engaged in a slugfest, with Poirier scoring the technical knockout 33 seconds into the fourth round.

5: Takedowns attempted against Gaethje, who stuffed all of them. Gaethje did not attempt a single takedown, choosing to forego any entanglements on the ground.

5: Takedowns executed on Anthony Pettis in his Nov. 11 submission victory. Poirier’s takedowns were effective against “Showtime,” who failed in his only bid for a takedown.

27: Minutes and 41 seconds of time spent inside the Octagon since his first fight with Alvarez. Poirier stopped Pettis at 2:08 of the third round and finished Gaethje at 0:33 of the fourth. Both bouts earned “Fight of the Night” honors.

2: Submission wins by brabo choke. Poirier used the maneuver to finish Pablo Garza and Jonathan Brookins. Incidentally, Chan Sung Jung finished him with a brabo choke in their memorable battle in May 2012.

2: First-round losses. McGregor and Michael Johnson were the perpetrators.

1: “Fight of the Year” award from Sherdog, given on the strength of his epic encounter with Jung at UFC on Fuel TV 3.