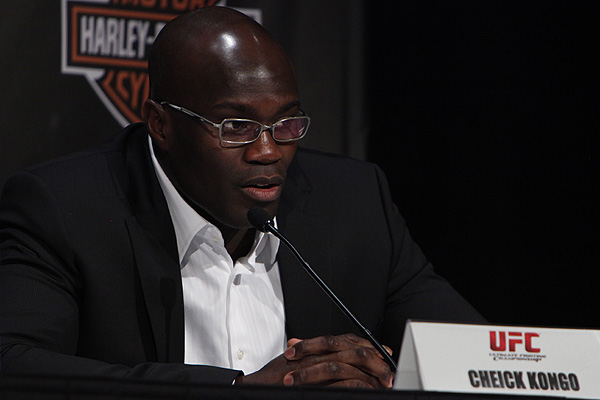 Cheick Kongo will carry the burden of expectation into his Bellator debut. | Photo: Dave Mandel/Sherdog.com

The 38-year-old French kickboxer will make his Bellator MMA debut against once-beaten Englishman Mark Godbeer in the Season 9 heavyweight tournament semifinals at Bellator 102 on Friday at the Visalia Convention Center in Visalia, Calif. The winner advances to the final, where a high-stakes showdown with either Lavar Johnson or Vinicius Kappke de Queiroz will await.

Godbeer last competed under the British Association of Mixed Martial Arts banner in March, when he scored a first-round technical knockout over Catalin Zmarandescu. A Trojan Freefighters teammate of UFC veteran Che Mills, the 29-year-old Englishman has never fought outside of the United Kingdom.

With the Kongo-Godbeer heavyweight semifinal as the centerpiece, here are 10 facts surrounding Bellator 102:

FACT 2: All nine of Godbeer’s fights -- eight wins and his only loss -- have ended inside the first or second round.

FACT 3: Lavar Johnson earned two “Knockout of the Night” awards during a four-fight stint in the UFC, pocketing $130,000 in bonus money for his handiwork against Joey Beltran and Pat Barry.

FACT 4: By the time Mikkel Parlo returns to his hometown in Copenhagen, Denmark, from his appearance at Bellator 102, he will have traveled a total of roughly 11,000 miles.

FACT 5: Brennan Ward wrestled collegiately at Johnson & Wales University in Providence, R.I., where he was an NCAA All-American and a national runner-up at the Div. III level. His 72 career wins rank 15th on the school’s all-time list.

FACT 6: Anthony Leone will be the answer to a trivia question someday. He was current UFC interim bantamweight champion Renan Barao’s first opponent under the Zuffa banner, submitting to a third-round armbar from the Brazilian dynamo at a World Extreme Cagefighting event in June 2010. Barao has since gone on to defeat Chris Cariaso, Cole Escovedo, Brad Pickett, Scott Jorgensen, Urijah Faber, Michael McDonald and Eddie Wineland, emerging as one of the sport’s top pound-for-pound fighters.

FACT 7: Two of Brazilian heavyweight Thiago Santos’ 11 wins have come via disqualification. He was awarded a victory against Ubiratan Marinho Lima over illegal strikes to the back at an Amazon Fight show in Augusto 2010. A little more than two years later, Eric Prindle’s errant axe kick to the groin at Bellator 75 made him the second Santos foe to be disqualified.

FACT 9:: Renegade Fighting Systems representative Joe Pacheco owns a 6-0 record, but his six opponents have combined for a 14-14 mark between them, and two have them have yet to win a fight.