It was the chills that let Roxanne Modafferi know she had a problem. Most fighters have abdominal cramping and loose, irregular stools in the first few hours after their post weigh-in meal, but the chills were something new for her.

Two hours later, she was on her knees, racked by chilling convulsions, crawling from her bed to the bathroom for the third time in 40 minutes. The abdominal cramping was getting worse. She felt nauseous, and there was a woman with a penchant for punishing submissions waiting to hurt her.

Athletes who re-feed following weight cutting commonly experience something known as “dumping syndrome.” The abrupt introduction of carbohydrate-rich food into the intestinal lumen creates an osmotic gradient that draws water across the mucosal membrane, leading to loose, irregular stools. Fighters experience loose stool, bloating and abdominal cramping. Usually these symptoms are short-lived: a fighter who carefully re-hydrates with electrolytes and is cautious in transitioning from a low carbohydrate/low sodium/ low fat diet to a more normal diet should be asymptomatic within 12 hours of weigh-ins.

But for Modafferi, her GI symptoms were steadily getting worse, not better. This was not a re-feeding issue; this was illness.

For unknown reasons, elite athletes are at somewhat higher risk for infection. The relationship between athletic exertion and infectious risk is “J” shaped: while moderate exercise reduces the risk of infection, very heavy exertion paradoxically pushes athletes’ immune systems past the point of optimization. To combat the risk of infection, many top athletes practice a form of reverse quarantine prior to competition. Closed training camps reduce a competitor’s pool of first- and second-degree “communicable contacts” from theoretical thousands to just a handful. The reason many Olympic athletes skip the opening ceremonies is that the health risk posed by being in close contact with thousands of new potential viral exposures a few days before competition is simply too great. When forced out of protective isolation by the demands of sponsors and promoters, athletes often wear surgical masks, tap elbows in lieu of shaking hands and do whatever they can to avoid being sabotaged by a last-minute illness. 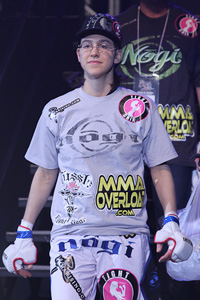 T. Irei
Modafferi walks to the ring on Dec. 30.
Modafferi stated that for the entire week prior to her Sengoku “Soul of Fight” bout against Hitomi “Girlfight Monster” Akano on Dec. 30 she had been irritated by nagging viral upper respiratory infection symptoms -- nasal congestion, scratchy throat, etc. She made sure to get plenty of sleep, lightened her training load and was careful not to endanger herself further with aggressive weight cutting techniques. Quite rightly, she was not overly concerned. A beautiful 1997 study by Wesiner et al looked at the effect of a common rhinovirus infection on athletic performance. Surprisingly, the study showed that in athletes who had been deliberately infected with the common cold there was no decrease in performance. Even though infected subjects felt worse than uninfected controls, objective measures of performance showed no decrease in performance at two-, five- and eight-minute intervals.

What has been shown to impair athletes, and what Modafferi suddenly found herself in steadily growing peril of developing, is dehydration. As loose stools progressed to frank diarrhea, her total body volume of water dropped.

Even low levels of dehydration have profound physiologic consequences. A fluid deficit of as little as two percent Total Body Weight (TBW) -- approximately one liter for Modafferi -- results in increased perceived effort and has been shown to reduce performance by as much as 20 percent. Cardiovascular performance, strength, reaction time, judgment, concentration and decision making are all affected. For fighters, dehydration increases the risk of brain injury.

Severe diarrhea, in Modafferi’s case probably caused by some form of food bacterial poisoning, can rob the body of as much as eight milliliters/kilogram/hour of fluid. A night of severe diarrhea can leave a fighter seriously depleted; perhaps a four- to five-percent TBW fluid deficit. The most direct treatment for this degree of severe dehydration is oral re-hydration with electrolyte solutions. The most notorious killer in the world -- infectious diarrhea -- can be effectively combatted with a treatment as simple as a few grams of Sodium, Potassium and glucose in clean water. Unfortunately for Modafferi, oral rehydration was made impossible by vomiting, and, even after the vomiting eased, nausea that impeded her ability to take in fluids.

When the miserable night ended, Modafferi saw her doctor and was immediately sent to the hospital. Doctors diagnosed her with severe dehydration and started anti-diarrheals and IV therapy with normal saline -- fluid with the same salt composition as blood plasma. Because of time restraints, she received 800 milliliters before being rushed to the arena. That’s too little fluid.

The diarrhea persisted. She developed fevers. As her immune system fought the infection, cytokines and prostaglandins poured into her system, releasing debilitating waves of whole body trembling and bone chilling cold.

Promoters and Modafferi’s coach encouraged her -- and she is not a fighter prone to bowing to adversity -- but the mind cannot drive the body beyond its physical limits. In pre-fight warm-ups, she was lightheaded and unstable on her feet. Dizziness, weakness, persistent vomiting and constant shaking left her huddled in the locker room. Any competent ringside physician would have recognized a compromised fighter unable to properly defend herself. It would have been a violation of the most basic ethics of medicine to let her fight.

In her blog, Modafferi described the misery of walking to the ring knowing she would not be able to perform for the fans cheering her name. A moment after her entrance into the ring, the physician on duty followed her, arms waving over his head, and the fight was over before it began. There were tears in the fighter’s eyes. There probably still are.

“I really, really hope I get the chance to fight Hitomi Akano someday,” she wrote, “and I am super, super disappointed my body failed me this time.”