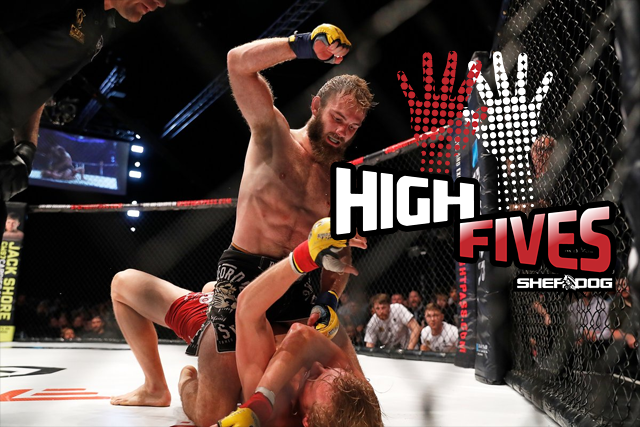 VICTORIOUS VIKING … The Cage Warriors 96 main event was a lightweight title clash between Denmark’s Soren Bak and hometown favorite Paddy Pimblett. The first frame was dominated by Pimblett, who came close to securing a victory with a rear-naked choke. However, “The True Viking” survived, and as the fight wore on, he started to take control with effective striking and clinch work. Late in the fifth round, Bak advanced to mount and tore into an exhausted Pimblett with punches. All three judges sided with Bak, who upped his record to 11-1 and claimed the promotion’s vacant lightweight championship. Pimblett, on the other hand, slipped to 14-3 and has now lost two of his last three fights.

Serious power
Dynamic ground game
Heart of a lion @JackGrantMMA is on the rise. pic.twitter.com/tpv5sDCoh9

BRUTAL BEATDOWN … Cage Warriors 96 also hosted a lightweight battle between England’s Jack Grant and Finland’s Aleksi Mantykivi. It was soon apparent that the Finn had no answer for Grant’s impressive standup skills. After a flurry of punches interspersed with several kicks, Grant backed Mantykivi to the fence and unleashed a barrage of right-side elbows followed by the fight-ending left hook to the head. The official time was 4:03 of Round 1. With the win, Grant improved to 15-4, with all but one of his victories resulting in finishes. Mantykivi dropped to 11-5.

This is MMA! @DalbyMMA shows his striking and grappling skills by putting his opponent to sleep

REDEMPTION … In a Cage Warriors 96 middleweight showcase, Ultimate Fighting Championship veteran Nicolas Dalby squared off with Italy’s Roberto Allegretti. Early in the second stanza, Dalby sent the Italian crashing to the mat with a right high round kick. Allegretti clambered back to his feet, only to be taken straight down again and into mount position. From there, Dalby administered ground-and-pound before taking his adversary’s back and sinking a rear-naked choke that rendered Allegretti unconscious. The referee waved off the contest 50 seconds into Round 2. Dalby, now 15-3, threw the brakes on a three-fight losing streak, while Allegretti fell to 3-1.

Virna Jandiroba (14-0) is still your Invicta FC Strawweight Champion, defending her strap for the first time with a second-round arm triangle choke on Janaisa Morandin. The self-proclaimed "female Demian Maia" has finished 11 of 14 victories, each by submission. #InvictaFC31 pic.twitter.com/xCl6zMmADz

NO CHOKING MATTER … In the Invicta 31 main event, strawweight champion Virna Jandiroba defended her title for the first time against fellow Brazilian Janaisa Morandin. The champ did considerable damage with ground-and-pound in the first round. In the second, she secured a head-and-arm choke from mount position. After transitioning to side control, Jandiroba kept squeezing until her opponent tapped 2:23 into Round 2. “Carcara” improved to 14-0 with her 11th win via submission. Morandin dipped to 10-2.

Low-key, @PearlGonzalez is making a case for Comeback Fighter of the Year. She burned out of the UFC against tough competition, but is now 3-0 in 2018 with Invicta. She's showing serious improvement too, similar to what Angela Hill accomplished in 2016. #InvictaFC31 pic.twitter.com/t3gKbKbalm

ON A ROLL … In supporting Invicta 31 action, UFC alum Pearl Gonzalez met Brazil’s Daiane Firmino at flyweight. Gonzalez looked impressive throughout, both on the feet and on the mat. In the first frame, having hip tossed Firmino to the canvas, she threatened with a scarf hold. Gonzalez came close to ending it with an armbar and triangle combination in the third stanza, but Firmino hung tough and survived. After three rounds, the judges sided with the American by unanimous decision. It marked the third win of 2018 for Gonzalez, who moved to 9-3. Firmino fell to 10-3.