“Besides being very strong, he learns very fast,” the Brazilian, who now lives in Chicago, said after his first session with Lesnar.

“Whoever wins will have a tough time against Brock,” Medeiros guaranteed in this exclusive interview with Sherdog.com.

Sherdog.com: How did you start working with Lesnar?
Medeiros: I got a phone call from his manager, Brian, last July. He wanted someone to help Lesnar with his ground skills and I accepted immediately, but when I saw the size of this monster, I almost gave up (laughs).

Sherdog.com: What impressed you the most about him?
Medeiros: At first his size, but in our first conversation I also liked his humility and his tenacity, and his interest to learn jiu-jitsu also called my attention. It’s pretty common that a professional athlete is not open to learning new techniques. I was also really impressed with how fast he learns the positioning and techniques. I believe his amazing capacity of assimilating new techniques is his biggest quality.

Sherdog.com: In his last fight against Couture, Lesnar just fought standup. How is his technical development on the ground?
Medeiros: He already has an excellent base that makes him naturally hard to sweep and he is working hard in every drill I teach him in order to fix important techniques. He trains hard, and his improvement is really good.

Sherdog.com: What’s his strongest technique on the ground?
Medeiros: His side attack. His attack from the back is also improving. His submission defense is really nice too, and by the day of [his next] fight, it will be much better. 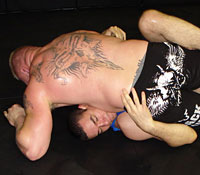 Marcelo Alonso/Sherdog.com
Medeiros prefers a matchup
with Frank Mir instead
of "Minotauro."
Sherdog.com: Which technique did you train most for Couture?
Medeiros: We knew Couture would be very well trained and prepared with a nice strategy and we believed that Brock would be on top if the fight went to the ground, so we worked a lot on controlling positioning. I mean on the ground, but of course he trained a lot of boxing and Greco. I believe the training was perfect because he beat one of the best MMA fighters ever.

Sherdog.com: As (Lesnar’s) ground trainer, do you prefer Mir or “Minotauro” to win and why?
Medeiros: As a trainer I prefer Frank Mir. First because Lesnar is really motivated to face him in a rematch, and even with Frank training with my friend and partner Robert Drysdale, I believe Minotauro is a much more difficult opponent. He has more experience and excellent ground skill, good boxing, a big heart and an unbelievable capacity of recovery that reminds me of Rocky Balboa. But the truth is that Brock will be ready for Mir or Nogueira. Anyone who wins will have a tough time against him.

Sherdog.com: How would a fight between Lesnar and Minotauro and also Lesnar and Fedor go?
Medeiros: I believe sooner or later those fights will happen. Against Minotauro, I see a typical jiu-jitsu vs. wrestling fight but with lots of boxing. Against Fedor, I believe it would be easier for Brock because he would dominate both on the ground and standing up. He is taking some days off, and as soon as he returns we will start to work to make him ready for Minotauro, Mir, Fedor or any other challenger.

Sherdog.com: How do you see your training partners Demian Maia, Marcelo Garcia and Andre Galvao in the MMA world?
Medeiros: Demian is doing an amazing job. I believe soon he will fight for the title. It wouldn’t be bad to have a UFC champion in Brasa (laughs). GalvÃ£o started winning but learned a lot in his fight. Recovering like he recovered in that fight is something that only a special fighter can do. Marcelo was having a great debut, but unfortunately he got cut. Actually I believe all those guys will be champions (because) they are the best we have in jiu-jitsu.

Sherdog.com: What about you? Do you think about having an MMA debut?
Medeiros: I have a lot of will to have an MMA match. Actually I’ve already had two Pankration-type fights in 1999, and every time I see my teammates fighting, my hands get sweaty. First I’m establishing my academy in Chicago. It’s a very new academy and needs all my attention, but all my Brasa friends are supporting me a lot to make my MMA debut. Soon I hope to make it, but right now my main focus is to welcome anyone who would like to train jiu-jitsu at my academy in Chicago. My address is 709S Vermont St. www.flomma.com.