Someday men will tell their grandchildren about the right hand of Dan Henderson.

Henderson took the Strikeforce light heavyweight championship by force with a stirring third-round knockout against Rafael “Feijao” Cavalcante in the Strikeforce “Feijao vs. Henderson” main event on Saturday at the Nationwide Arena in Columbus, Ohio. Having been floored in the first round, the two-time Olympian zapped Feijao with a straight right hand that sent him to the canvas, smacking it face-first. Henderson pounced and sealed it with unanswered blows from the back.

Feijao became the fourth consecutive Strikeforce champion to surrender his title in his first defense, joining Renato “Babalu” Sobral, Gegard Mousasi and Muhammed “King Mo” Lawal. In fact, the promotion’s 205-pound crown has not been successfully defended since Bobby Southworth outpointed Anthony Ruiz in June 2008. Can Henderson break the hex?

A closer look at four matches we want to see after Strikeforce “Feijao vs. Henderson” follows:

Dan Henderson vs. Gegard Mousasi: Even at 40, Henderson remains one of MMA’s elite competitors, and he seems to have found a second wind with his return to 205 pounds. Carving out an historic niche in the sport, the former two-division Pride Fighting Championships titleholder added the Strikeforce light heavyweight crown to his lengthy list of accomplishments by felling Feijao. Packaging a vicious right-hand with world-class Greco-Roman wrestling skills, Henderson will be difficult to knock from his new perch. Mousasi, provided he passes his next test against Mike Kyle in April, may pose the most significant threat. Few are blessed with more physical talent than the current Dream light heavyweight champion, who has competed at three different weight classes in the last two years, winning 17 of his past 18 fights.

Marloes Coenen vs. Miesha Tate: Coenen turned away prospect Liz Carmouche, though she did not escape the encounter unscathed. The relatively unknown challenger took down and mounted the Strikeforce women’s welterweight champion in rounds two and three, pummeling her with punches and hammerfists. Coenen, leaning on experience and technique, pulled the proverbial rabbit out of her hat and submitted Carmouche with a textbook triangle choke in the fourth. Tate won a one-night women’s tournament in August to secure a crack at the 135-pound title. A knee injury forced her to withdraw and opened the door for Carmouche, who nearly capitalized on the opportunity. Nevertheless, Tate earned her shot and deserves to be next in line once she heals. 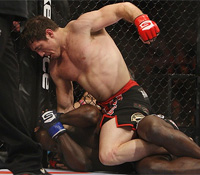 D. Mandel
Kennedy took advantage on the floor.
Tim Kennedy vs. Robbie Lawler: Kennedy pointed his figurative finger in Lawler’s direction after he submitted Melvin Manhoef inside one round at Strikeforce “Henderson vs. Feijao.” The matchmaking makes perfect sense, though promotional brass will have the final say. Kennedy remains vastly underappreciated, just a notch below the elite middleweights of the world, and will likely need one more meaningful victory before he can put on the full-court press for a rematch with reigning Strikeforce 185-pound king Ronaldo “Jacare” Souza. He went five hard rounds with the Brazilian seven months ago in a battle that took place almost entirely on the feet.

Lawler, meanwhile, succumbed to Souza’s otherworldly submission skills in his latest outing in January. One of the sport’s most-feared knockout artists, Lawler needs to get back in the game sooner rather than later in order to remain relevant in what has become Strikeforce’s sexiest division.

Jorge Masvidal vs. K.J. Noons: Masvidal looks great at times, average at others. He pinned the first loss on Billy Evangelista at “Feijao vs. Henderson” and put himself in position to challenge one of the promotion’s more prominent names at 155 pounds. The American Top Team representative has been a maddening blend of brilliance an inconsistency throughout his career, blitzing fighters like Satoru Kitaoka and Joe Lauzon one day and blowing tires against foes like Luis Palomino and Rodrigo Damm the next. He has the talent to be a champion. Does he have the rest of the requisite tools? Noons can provide a proper litmus test for anyone in the lightweight division. Arguably MMA’s purest striker, he has proven unwaveringly ambitious and will want to make a statement upon his return to 155. Masvidal, a sound boxer with brawling and bravado in his blood, figures to oblige the former EliteXC champion with a standup battle in a match that could give rise to a new contender for the throne currently occupied by lightweight boss Gilbert Melendez.