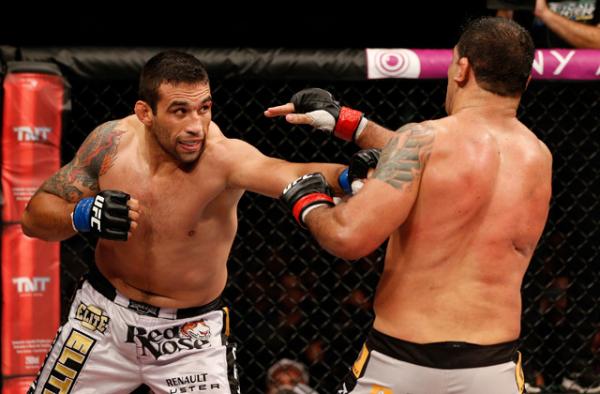 Fabricio Werdum has a rightful claim as the No. 1 contender at heavyweight. | Josh Hedges/Zuffa LLC/Getty Images


In the aftermath of UFC on Fuel TV 10, the opinions of many within the sport of mixed martial arts varied regarding Fabricio Werdum and Antonio Rodrigo Nogueira.

When debating Werdum, some claim he has earned a crack at heavyweight champion Cain Velasquez. Others disagree. When deliberating Nogueira’s future, quite a few believe his days as a top contender are over and that he should hang up his fingerless gloves for good. Again, others disagree. In each case, both sides have a point.

Werdum is ranked high within the Ultimate Fighting Championship heavyweight division, behind only Velasquez, former champion Junior dos Santos and Daniel Cormier. His second-round armbar submission of “Minotauro” should cement his place as the frontrunner for a chance to wrest the title from Velasquez. Werdum has won three consecutive bouts, two of them by stoppage. His triumph over Nogueira adds another significant feather to his hat, but he also holds a recent win over Roy Nelson -- a man who has many clamoring for a title shot on his behalf.

Aside from Cormier, who will be dropping down to 205 pounds at some point, no other heavyweight deserves a crack at the UFC championship more than “Vai Cavalo.” Granted, dos Santos owns a higher ranking than his Brazilian counterpart, but a rubber match between “Cigano” and Velasquez is all but inevitable.

However, the impressive submission win over one of the greatest fighters of all-time and the fact that he has won six of his last seven bouts puts Werdum ahead of everybody else. He has not tasted defeat since returning to the UFC, and considering the lack of depth that still exists in the heavyweight division, Velasquez-Werdum as the next title attraction seems like a no-brainer.

Werdum has never looked better. Yes, there were shaky moments against Nogueira, but he in essence dominated a man widely regarded as one of the top two heavyweights in the history of the sport. He scored an early takedown, controlled the pace, landed several clean strikes and eventually submitted a submission guru. Werdum might not be the most popular, marketable or entertaining fighter, but that is not what should determine who is next in line for a world championship.

File Photo
How much does “Minotauro” have left?
As for Nogueira, there have already been a number of cries for him to retire. While it is typically unwise to jump the gun and join the crazed masses in situations like this, he is not exactly a spring chicken anymore. Plus, the sheer amount of abuse his head and body have absorbed over the years is something to behold.

Looking at his recent results more closely, Nogueira has won only three times in the past five years, and those wins have not come against a Murderer’s Row of heavyweights: Dave Herman, Brendan Schaub and a well-past-his-prime Randy Couture. He has lost twice to Frank Mir, Velasquez flattened him within a round and he submitted to Werdum.

With many great fighters, there comes a time when they stick around too long and start to lose fights they likely would not have lost in years past. When Nogueira ruled the roost in Pride Fighting Championships, there was seemingly nothing he could not do.

He withstood inhuman amounts of punishment, only to pull the rabbit out of his hat time and time again. It was not until the Brazilian’s first meeting with Fedor Emelianenko that he was truly beaten, and even though he failed to solve the riddle that was “The Last Emperor,” Nogueira still toppled every other man -- he avenged his loss to Josh Barnett -- Pride put in front of him.

Still, all the wars have taken a toll. “Minotauro” is much slower inside the Octagon these days and has lost much of his ability to walk through hellfire. Can Nogueira make one last run in the sport? It is possible. We are after all talking about “Minotauro” here. However, all the signs are pointing to his need to retire from the sport he helped build.

Miscellaneous Debris: UFC on Fuel TV 10 was one of the best events of the year thus far. It was overflowing with wonderful submissions and stellar knockouts, which does not happen all the time. Events like this are what make MMA such an entertaining sport. Obviously, not every show can be so action-packed, but this kind of card can help turn its subpar brethren into distant memories ... Leonardo Santos was crowned as the winner of “The Ultimate Fighter: Brazil” Season 2, and he earned that distinction in spectacular fashion. After some back and forth with William Macario, Santos secured an arm-triangle choke with 20 seconds remaining in round two. His resilience, determination and submission prowess make him one to watch ... Thiago Silva looked like a wrecking ball against Rafael Cavalcante, but it is hard to get excited about the Brazilian because of past history. Silva submitted false urine samples at UFC 125 two years ago, costing him a victory over Brandon Vera, and he had his UFC on Fuel TV 6 win over Stanislav Nedkov overturned in November after testing positive for marijuana metabolites. A cloud of suspicion will continue to surround him until he proves himself trustworthy. Is it unfair to keep a cynical eye on Silva? Of course not.