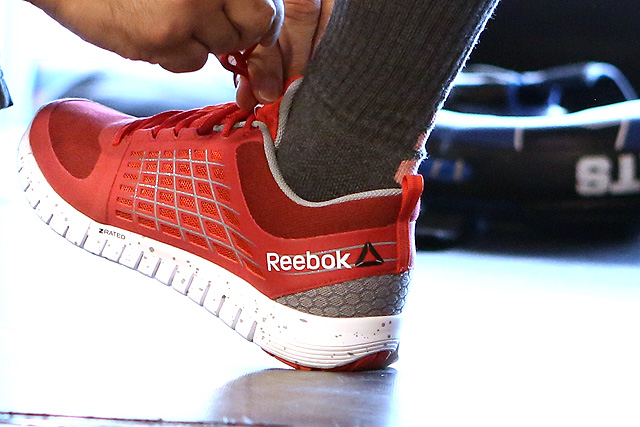 After bantamweight Cody Gibson lived up to his “Renegade” nickname and leaked the financial particulars of the Ultimate Fighting Championship’s Reebok deal, the kneejerk question in the fight world was, “Are these good enough?” Those fighters who spoke up did so with a lusty negative.

If you kept up with the UFC-Reebok saga on Wednesday, you have already read the hot-taking tweets from scorned fighters. Some were incredulous and dismayed, like Roger Narvaez, who revealed his $2,500 was half of what he was paid by a single sponsor for his last bout. Brendan Schaub used a frowny emoji to bemoan the fact that he has made six figures in sponsorships for his last six bouts. Some were outright caustic, like Matt Mitrione, who said that Reebok’s “deal of the century” came at the “cost of the fighters.” Perpetual political thorn-in-the-side Tim Kennedy tweeted Bellator boss Scott Coker that he “missed [his] face.”

I strongly opposed the UFC basing the Reebok sponsorship around its farcical in-house rankings and lobbied for a tiered system based on tenure similar to what has been implemented. Apart from strange, circumstantial outliers -- Gilbert Melendez and Eddie Alvarez are worth $2,500? Scott Jorgensen has 21 Zuffa bouts? -- I think fight folks are comfortable with the concept, especially as a counter-option to the rankings-based model. However, the Reebok deal was supposed to supplant a flawed and decayed sponsorship market in the UFC, though it is still present in MMA on the whole. This is an ambitious goal and one that becomes even loftier if fighters feel they’re being short-changed or compromised.

Related » Dana: Reebok Deal ‘No Different Than Any Other Sport’


Individual sponsorship remains a wildly variable venture, even in MMA. Sure, it’s no longer the 2006-10 salad days, when local auto dealerships and fledgling online retailers routinely helped mediocre fighters appearing on UFC main cards pull down six figures in sponsorships, but particular athletes have still been able to establish valuable and vital brand relationships which are now in turmoil. At the very least, the dozen fighters with which I talked Wednesday were all confident that even in the leanest of times, they’d be able to drum up more than $2,500 or $5,000 in sponsors for any given fight. The sponsorship market has seen better days collectively, but what good is a solution that complicates matters for many it seeks to serve?

The UFC has 586 active fighters on its roster, and, assuredly, the particulars of this deal will benefit a large number of them. However, those perks come at the expense of their fellow fighters. Fighters like the aforementioned Schaub, who are visible and connected enough to rake in six figures worth of sponsor cash, are now wondering how they can replace a quarter million dollars per year, assuming they fought three times in that timeframe. Demetrious Johnson receives an unfathomable amount of flak for not being intriguing enough to the masses, yet one of the most appealing parts of his persona, his Microsoft Xbox sponsorship, is now in the midst of being retooled. Clay Guida not being sponsored by the Chicago Carpenters’ Union is heartbreaking. It also shows an ironic disregard for the UFC’s international interests: The Brazilian sponsorship market is a unique animal in itself and can offer many opportunities to its native fighters due to the sport’s popularity; plus, it hinders the opportunity for the UFC’s up-and-coming international talents to develop their own branded identity. Does Reebok really serve the best interests of Joanna Jedrzejczyk in Poland and Europe on the whole, promotionally or financially? No, especially not when she is into Jordans and Doc Martens.

Zuffa’s ability to be flexible within the Reebok deal’s framework is essential, as the company must find ways to expand the revenue available to fighters while still giving fighters the necessary autonomy to cultivate their own careers, brands and bank accounts. The UFC hopes to use future endorsement deals to potentially raise the payouts for each tier, but that is not quite enough in the meantime.

Yes, coveted fighters like Ronda Rousey, Anthony Pettis, Conor McGregor and Paige VanZant have already been blessed with individual Reebok deals, and other official UFC sponsors like Monster Energy Drink can keep clientele like Quinton Jackson happy -- whenever he might fight again -- with side cash. However, it’s still only a select handful of fighters getting the sweet deal, and they’re likely to be better compensated fighters anyhow. Moreover, deals from non-Reebok sponsors will always be subject to the UFC’s ability to attract blue-chip -- or blueish-chip -- sponsors to its product. While Zuffa stated that Reebok will have exclusive say in which athletes are chosen for individual sponsorship, the Ultimate Fighting Championship’s influence in such matters is both obvious and potent, especially given UFC President Dana White coming out publicly and vowing to “fix” Myles Jury’s situation with Reebok, which surrounds a previous negotiation between the two that predates the UFC-Reebok deal; and that’s to say nothing of the UFC’s reign over redistributing other potential sponsors’ dollars.

As of now, the UFC-Reebok deal allows for only one other sponsor to appear on official in-cage apparel: the presenting event sponsor, be it Monster, Bud Light, Harley Davidson, etc. Is it really too much to ask that fighters get to include a sponsor patch of their own choosing, not subject to any extraneous BS taxation from the UFC, so long as it does not conflict with the promotion’s official energy drink, beer, motorcycle, corn snack or any other contractually promoted substance? This decision would require Reebok’s blessing, but it is a minor concession that gives fighters some agency and control over their careers. Matt Lindland will not show up with a Sportsbook patch, I promise.

It seems intentionally snarky for White and UFC CEO Lorenzo Fertitta to maintain that the UFC’s deal is just like “every other sport” when it is so clearly not. Most importantly, major stick-and-ball sports have unions and collective bargaining. NBA players still get to have their own shoe deals. Tom Brady has to wear Nike on the field, but there’s actually a market for him to endorse Under Armour off the field, which sadly, isn’t a reality for 99 percent of the UFC roster. Within individual sports without the traditional league-owner-athlete structure, the freedom to seek endorsements and sponsorships is paramount. Manny Pacquiao, for instance, made just under $2.3 million alone selling space on his shorts for the Floyd Mayweather Jr. fight on May 2.

White and Fertitta are quick to point out that fighters are free to endorse what they wish outside of fight week, but such a stance is glib. They’re professional fighters; they go on television or pay-per-view two, three, maybe four times a year and try to use their mortal coil as a billboard. More fighters will flood your timeline with social media endorsements, one of the easier ways to grab some sponsorship cash. Maybe a lifestyle print ad campaign or local pizza parlor commercial aren’t out of the question for MMA athletes, but the fact remains that most potential sponsors want to see their likeness in HD at a weigh-in and on fight night. Fighters like Rousey, who can draw real advertising and endorsement revenue outside of the cage, are rare enough to count on one hand in this sport. That little patch of flexibility could go a long way for a fighter, both financially and in good will.

While we’re on the topic of good will, transparency would be an immeasurable positive in this situation. I’m not naive; I’m fully-aware that Zuffa has remained dedicated to keeping fighter contracts and payouts shadowy and esoteric over the years, which keeps fighters from knowing how much everybody else is truly making and handicaps them at the bargaining table. The UFC is privately held, as Fertitta is so quick to remind us, so there’s no onus for the company disclose any hard numbers.

However, this is a deal worth in the neighborhood of $70 million over five-and-a-half years and is touted ad nauseam for the fact that all the revenue is going back to the athletes. There’s already a slate of smart-if-inexact science out there extrapolating hypothetical Reebok payouts so far this year and prognosticating 2015 totals. Bearing in mind that the deal doesn’t actually come into play until July, every calculation I’ve seen for a total 2015 payout is $6-7 million. While I fully concede the prognostications can’t be perfect, it’s not as though the numbers are particularly difficult to crunch. We know with some certainty what percentage of the roster falls into which tiers, how often athletes fight per year, how often champions defend their titles and other important variables. Anywhere between 55 and 65 percent is undeniably a great revenue-sharing number compared to stick-and-ball leagues, but again, those are collectively bargained and no one is suggesting that those players are getting all the revenue in those deals.

If Reebok puts approximately $11-12 million dollars in play each year of the deal, where is the rest of the money going? Zuffa has referenced direct operating costs, which is perfectly reasonable, as this is a resource-intensive undertaking that requires massive logistical planning, new employees and so on. Any time monetary redistribution is part of the game, though, concerned parties want to know where the money is going; it’s why charities compete over who has the lowest overhead costs in pursuit of your patronage. At the very least, it would show the UFC as conscientious and forthright. It could even serve to vindicate the company against charges of lowballing fighters in the tier payments if the financial data makes it clear that $2,500 is in fact an equitable amount to pay a Tier 1 athlete. We don’t need the trivial details down to the salary of the poor person who has to chase fighters around all week to make sure they don’t steal more than their fair share of Reebok gear, but basic accounting could end a lot of complaining.

“Goodwill” isn’t strictly a feel-good workplace abstraction, either. The UFC really needs all the morale it can muster at a time like this. The blowback gives ammunition to Zuffa’s usual enemies, from Culinary Workers Union 226 to the class-action suit plaintiffs and beyond. It makes Bellator MMA a more attractive option for those fighters who feel marginalized. The UFC isn’t in serious danger of losing any of its champions or coveted draws, but when staging 50 cards per year, entertaining mid-card talent becomes more crucial to its roster, never mind the ability to attract rare crossover athletes that can command legitimate sponsorship money out of the gate. The Reebok deal is one of the most demanding commitments the UFC has put upon its athletes, further stretching the tenuous argument that these fighters are “independent contractors,” in spite of how little of that independence they are able to retain.

It remains to be seen how quickly and profoundly the UFC can grow the Reebok deal, which may have a vastly different complexion three years from now, just past the halfway point of its life. In the meantime, there will be plenty of disgruntled fighters with garbage bags full of ZigTechs.