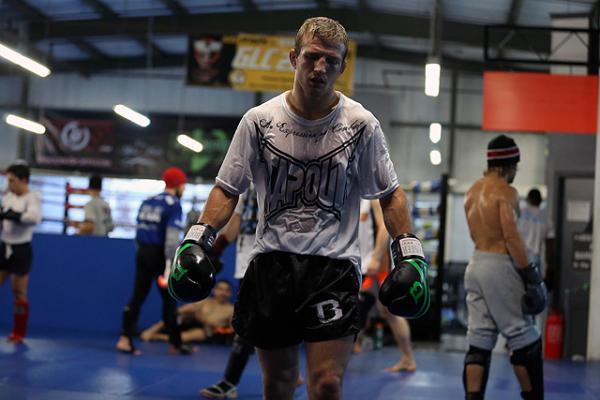 T.J. Dillashaw chose to leave the camp where he rose to fame. | Photo: Dave Mandel/Sherdog.com

“The contemplation of ruins is a masculine specialty.”

That was psychologist Erik Erikson’s conclusion of an experiment where he noted the tendency of male children to build block towers as high as possible until they inexorably crashed to the ground, whereupon they would begin building again. There’s a metaphor somewhere in there for former Team Alpha Male member T.J. Dillashaw to suss out on his plane ride from Sacramento, California, to Broomfield, Colorado, where he will now train exclusively with Duane Ludwig.

Usually, a fighter going to train with a coach isn’t all that newsworthy beyond a headline, but the backdrop of Dillashaw’s move is full of juicy controversy. Ludwig was the head coach of Team Alpha Male for a year and a half before leaving in May 2014 to start his own gym, Bang Muay Thai. Only recently have the details of his departure started to surface, and even though said details don’t depict Ludwig in a flattering light, Dillashaw has still essentially sided with the trainer who oversaw his transformation to Ultimate Fighting Championship bantamweight champion. Dillashaw didn’t draw the line in the sand, but he knowingly crossed it.

After Dillashaw graduated college in 2008, he was taken in by Alpha Male founder Urijah Faber. Under Faber’s tutelage, Dillashaw amassed a 6-1 record with one knockout win, his one loss a resounding knockout at the hands of John Dodson at the “The Ultimate Fighter 14” Finale. Compare that to his 6-1 record under Ludwig’s wings, where he tallied five stoppage wins and his lone loss was a controversial split decision that he probably should have won.

That side-by-side analysis may be simplistic, but it still proves a point: Faber brought Dillashaw to the party, but Ludwig made him a star.

In all fairness, “The California Kid” is a true legend of the sport. Faber’s featherweight run in World Extreme Cagefighting, which saw him win and defend the belt five times, single-handedly made casual fans care about fighters below 155 pounds. It’s no exaggeration to say that Faber is largely responsible for the implementation of the featherweight, bantamweight and flyweight divisions in the UFC. On top of that, he was a pioneer of phase-shifting, creating potent offense from scrambles by brilliantly blending takedowns, positional dominance, strike flurries and submission attempts together in fluid sequences. He is one of the founding fathers of the meta game that is currently pervasive in the sport.

All this is duly noted and credit given, but an honest assessment of Dillashaw’s historic run shows that he has probably learned about as much as he can from Faber. His success has mostly stemmed from shifty footwork, clever angles and clean striking combinations -- all trademarks of Ludwig’s system. Defensive wrestling allowed Dillashaw’s skillset to evolve this way, sure, but his wrestling and scramble-grappling don’t seem to be in need of fine-tuning anymore; he’s reached that level, and now he needs to continue developing in areas where Faber and company may not be able to help.

Fighters frequently train with several coaches and camps. Leading up to UFC 192, Tyron Woodley notably went back and forth between American Top Team and Roufusport, apparently to the chagrin of no one. It makes sense; no one coach or team is master of all things MMA. The smart fighters exist in the crosshairs of expertise, open to learn from anyone and everyone they can. Hell, even Steven Seagal played some kind of role in Anderson Silva’s highlight reel. If you’re a fighter, you go where you need to go to get the most out of your career, and Dillashaw has gone from getting victimized by a smaller fighter at the “TUF” finale to a champion and pound-for-pound entrant. Much of that success is due to Ludwig.

Here’s where it gets fuzzy. From the details released, it’s easy to understand Faber’s feelings of betrayal. Faber accused Ludwig of making racist and sexist remarks -- to black and female fighters, mind you -- bullying gym members and their families, and a wide spectrum of other shady behaviors. Ludwig’s responses have been underwhelming and unconvincing. One would think that he would be a little more adamant to clear his name of such accusations, whether or not they are true. Whatever actually happened, Ludwig’s character, not Faber’s, has taken a hit.

At the end of the day, though, success in the cage has very little to do with personal integrity. A person could be a misogynistic racist and the best striking coach in the game -- or at least the best coach for a specific individual. Fighters get paid to fight people, not social justice causes.

Does that mean Ludwig should be forgiven of all alleged wrongdoing? Of course not. Dillashaw is simply choosing his career over Ludwig’s transgressions, and rightfully so. When all is said and done, Dillashaw’s victories will be far more important than Ludwig’s alleged offenses. The window to make a living in the Octagon is a small one, and it isn’t as if Ludwig would have magically become a better human being if Dillashaw stayed in Sacramento.

If Faber truly wishes the best for Dillashaw, as he has half-heartedly vocalized, he would be able to overlook his beef with “Bang,” however legitimate it may be, and leave the Alpha Male doors open for Dillashaw to come back at any time. If he closes them on Ludwig’s face, that would be understandable and fair. The squabble only involved Dillashaw because Faber threw down the gauntlet. If Dillashaw is indeed family, as Faber has said he is, then he should be able to separate his personal feelings with Ludwig and support Dillashaw. Such action would be beyond that of a typical alpha male, though. That would be the behavior of a true leader.

It may be the competitive spirit of man to build, destroy, and start over again in the hopes of building an even larger, more impressive construct. Dillashaw’s career reached amazing heights with Team Alpha Male, no doubt about it. But it seems time to begin anew for the young champion, to destroy monuments of his past so he can make room for a newer, greater structure.

It would be in the best interests of Faber, Dillashaw and the rest of Team Alpha Male to extinguish the burning bridge between them before the damage is irreparable. Even if that doesn’t happen, when Dillashaw hangs up the gloves for good, he will likely be able to see the smoldering embers from the height of a vantage point he would have never reached with Team Alpha Male.