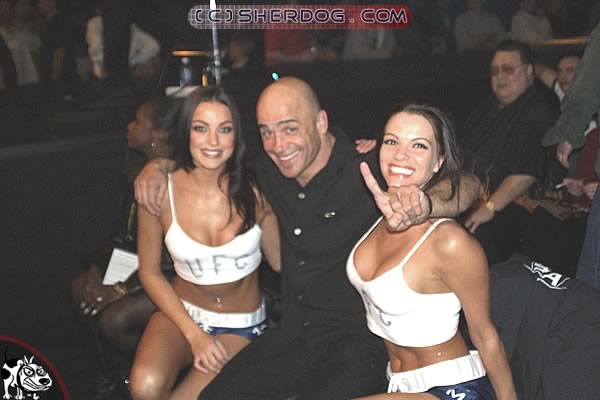 Like most who became MMA fanatics during the early 2000s, I adore Bas Rutten. I loved him as the Pride Fighting Championships color commentator. I watched his career highlight videos once every few days. I would even annoy my college friends by endlessly quoting from his immortal instructional DVD on street defense.

Lastly, I have seen every single fight of his career multiple times. So it is with the greatest respect and affection that I offer the following sober, honest assessment: Bas Rutten is deeply overrated.

Let's start by discussing what “El Guapo” truly was in the MMA game. He came from a background in Dutch kickboxing, where he was good but not exceptional. He never won any significant titles, and the best opponent he faced was Frank Lobman. Lobman was an excellent fighter, but not quite the elite of the day, as attested by his 0-3 record against Peter Aerts—who was among the elite of the day—with all three losses by knockout.

Lobman knocked out Rutten in the first round, which corresponds to what I think of Rutten as an MMA striker: someone who had deadly offense but limited defense. If you watch Rutten's instructional videos, he advocates standing completely square with one's opponent, with neither shoulder or knee in front of the other. There is a reason no one does this in either boxing or modern MMA. While it may allow one to generate more power from the non-dominant side, it also makes one very vulnerable to their opponent’s strikes.

If you watch Bas' MMA fights, he is practically begging to be hit at times. Luckily for him, the only times he faced a decent striker in MMA were his two Pancrase encounters with Maurice Smith. Frank Shamrock and Guy Mezger were very green and fairly poor strikers at the time they fought Rutten— especially Shamrock, a point to which we will return later. Rutten’s striking was very good for MMA at that time, but he was far from being a K-1 contender, let alone champion. Someone like Patrick Smith may very likely have been a better pure kickboxer.

What about his other skills? Well, Rutten certainly adapted to MMA much better than the aforementioned Smith or any other kickboxer of that era, and he deserves immense respect in that regard. However, we must again exercise sobriety. As Rutten himself will readily admit, he had horrendous, almost nonexistent takedown defense throughout his whole career. Even Maurice Smith took him down with ease.

Once on his back, Bas knew some basic sweeps and submissions that worked well enough with the Pancrase ruleset and the competition he faced. Most of those he developed thanks to Larry Papadopoulous, who was neither a celebrated Brazilian jiu-jitsu practitioner nor particularly successful at MMA. Looking at Rutten’s skills, I estimate he was the equivalent of either a BJJ blue or purple belt for that time. Again, that was enough, given Pancrase's rules. For those unfamiliar: Pancrase’s ruleset at the time banned strikes with a closed fist, and whether explicitly or through a “gentlemen's agreement”—sources differ here—there were no strikes of any kind to a grounded opponent.

Without having to worry about being ground-and-pounded, Bas was capable of either hitting a sweep or submission, or simply getting out of an opponent's submission attempt—the only tactic they could attempt from top position—to get back to striking, where he could really shine.

So we have a good, but not great striker with poor defensive wrestling and a fairly basic submission game that worked for a very unique ruleset. Now let's go over Rutten’s accomplishments and victories, starting with his career in Pancrase. Again, let's give him his due. I have always been impressed by how extraordinarily tough and resourceful he was in his fights. He frequently went through many bad positions and sustained a significant beating before coming back to defeat his adversary. However, how good was the opposition? He defeated a number of famous names, including two wins over Maurice Smith and one over Mezger. He went 2-1 against Frank Shamrock and lost twice to Ken Shamrock.

A lot of people explain away the two losses to the elder Shamrock by claiming that Rutten was still very new to MMA and hadn't properly worked on his ground game and submissions. I completely agree. Shamrock was in his prime and defeated a very raw version of Rutten. I think an encounter between the two would have gone very differently just a year or two later.

However, let's extend that same courtesy to the Dutchman's own victims. Maurice Smith simply wasn't a good fighter in either Pancrase or the very similar Rings organization, amassing a disastrous record of 2-7 across the two promotions and being submitted left and right. He was absolutely clueless on the ground back then. Not to say that beating him meant nothing, but Smith lost to journeyman Yoshihisa Yamamoto and was submitted by the much smaller Kiyoshi Tamura on top of losing to the likes of Rutten. It wasn't until the American kickboxer started training with Tsuyoshi Kosaka and FrankShamrock that he became skilled off his back and turned his MMA career around, eventually leading to the biggest upset in MMA history when he beat Mark Coleman for the Ultimate Fighting Championship heavyweight title.

The same applies to Smith's future stablemate Frank Shamrock, only Shamrock completely lacked stand-up at the time, rather than grappling. In fact, the first encounter between Rutten and the younger Shamrock, which the 22-year-old American won, was also Shamrock’s professional debut. Rutten would win a razor-thin split decision in the rematch and then triumph more decisively in their rubber match. Again, this was the Frank Shamrock with no striking and poor cardio that would go on to lose to John Lober, and not the all-time great that he would later become.

Mezger was 4-2-1 and barely over a year into his career when he met Rutten. Neither his striking nor his grappling was remotely as good as what he would show in later bouts. I can already imagine how many readers are rolling their eyes here. “So is everyone that Bas beat just too young and raw, then?” Not at all. In fact, there are two famous names he faced that were very much in their primes: the aforementioned Kosaka and Kevin Randleman, Rutten’s two UFC opponents.

Let's begin by noting that Rutten was very likely the most hyped arrival in the history of the UFC. The then-owners of the company, Semaphore Entertainment Group, were in horrible financial straits after cable companies refused to carry cards on pay-per-view, and saw Rutten—a dynamic, charismatic striker—as a way to turn the company around.

The level of promotion for the debuting King of Pancrase can't be understated here. On the official UFC 18 poster there is no sight or mention of UFC welterweight champion Pat Miletich, former UFC heavyweight champion Coleman, Pedro Rizzo, the returning Tito Ortiz, or the other famous names fighting that night. Instead, it's dominated by a picture of Rutten, with a caption proclaiming him the best martial artist on the planet. 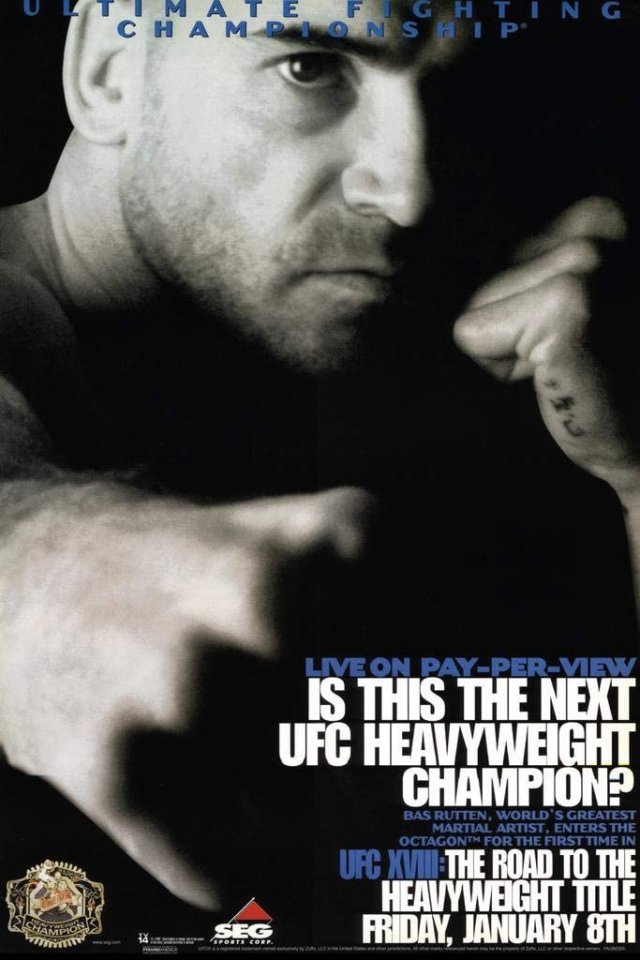 A four-man tournament was organized to fill the UFC heavyweight championship that Randy Couture had vacated, and in the first round, Rutten faced Japanese judoka and professional wrestler Kosaka. Rutten had some early success standing, but Kosaka had little trouble taking him down. Unlike Pancrase, Rutten was getting pelted with strikes from the top, which he was clearly uncomfortable with and didn't know how to properly defend. Then, at 5:23, referee John McCarthy performed one of the worst and most influential referee decisions in MMA history. With Kosaka beating the stuffing out of Rutten in half-guard, he stood them up. Kosaka was literally in the middle of connecting on a brutal punch to the body when McCarthy interceded. I love “Big John” as much as anyone, but this was far from the only shady move he pulled in early UFC history. The fact that he was close personal friends with Rutten and would later open up Legends MMA with him doesn't help matters.

Amazingly, one terrible standup wasn't enough. Kosaka took Rutten down again and continued pounding away at him, with slightly less vigor. Yet again, at the first available opportunity, McCarthy stood them up at 9:18. You know the rest. Kosaka was too tired to attain a third takedown, and Rutten, to his credit, came back with a thrilling knockout in overtime. Still, there is no question that McCarthy changed the outcome of the match. Rutten was not getting up nor did he appear to have any idea how to do so. How great can we really consider him when he would have lost to Kosaka under fair officiating? Kosaka was a decent fighter for that time, but I hardly recall anyone calling him an all-time legend.

Rutten’s next fight, at UFC 20, was against Kevin Randleman for the heavyweight title. In one of the most controversial decisions of all time, Rutten got the nod despite Randleman taking him down again and again with ease and smashing his face apart with ground-and-pound for the first four minutes of the match. Admittedly, Randleman's pace slowed down considerably afterwards, and Rutten opened up a cut on the American wrestler from the bottom with elbows to the back of the head, which were legal at the time. Still, the notion that Rutten was consistently doing damage from his back is pure rubbish. Both fighters went through long bouts of inactivity and by the end, neither was doing anything.

It's not as convincing or dominating as it looked to be early, but Randleman absolutely deserved the nod. Anyone doubting this need only look at fights of that era where the man on top does virtually nothing, like Joe Moreira against Yuri Vaulin, and still gets the decision. In Randleman's case, he also out-struck Rutten and inflicted more damage.

So in the two instances of Rutten taking on notable fighters in their primes under more conventional rules, he is officially 2-0, but any impartial observer would conclude that it would be 0-2 with proper refereeing and officiating, and without the UFC staking its very existence on Rutten's popularity.

After all this analysis, what can we conclude about Rutten? I consider him a massively important early pioneer and certainly great for his time. He was also the first truly successful mixed martial artist who came from a kickboxing base, and is a rightly beloved personality.

Is he one of the greatest fighters to ever live? No way, not unless you consider Tsuyoshi Kosaka one of the greatest, too. Is he one of the greatest strikers in MMA? Also no. His standup style would be antiquated and badly exploited nowadays, and he wasn't close to the level of top K-1 guys in his own time. Was he even the best that the 90s had to offer? Again, no. My personal pick for the best of the decade is FrankShamrock, but I would choose many guys before Rutten, including Couture, Coleman and even Vitor Belfort and Don Frye. None of this decreases my love and appreciation for Bas Rutten. However, it injects some much-needed honesty into the narrative of his career.

« Previous Orion Cosce Set for Octagon Debut Against Nicolas Dalby at UFC 255 Next Khabib Won't Do ‘TUF’ with Conor McGregor: Not ‘Even if They Give Me $5 Billion’ »
More
Latest News
ALLUFCBELLATORPFLONE