The Ultimate Fighting Championship’s annual Super Bowl weekend event has set the stage for some of the sport’s more memorable moments.

UFC 143 on Saturday at the Mandalay Bay Events Center in Las Vegas could do more of the same, as Nick Diaz meets Carlos Condit for the interim welterweight championship in the five-round headliner. The winner figures to move on to a unification bout with Georges St. Pierre, once the reigning 170-pound king recovers from reconstructive knee surgery.

Sherdog.com caught up with a number of professional fighters and trainers to gauge their opinions on the UFC 143 “Diaz vs. Condit” main event:

Mike Ciesnolevicz: I am so much more excited about this fight than I was now that GSP is not included. I probably would not have watched if GSP was fighting. I don’t like to go to bed that early on the weekends, and he would surely put me to bed faster than if I chugged a bottle of Nyquil. I know this fight will be super exciting. It’s actually one of the best possible fights I can think of as a fight fan. As for the skill sets and strategy, I believe Diaz has the punching advantage and Condit is better with knees and kicks. I think neither guy has great wrestling, so that should cancel out. In the Brazilian jiu-jitsu department, Diaz has the advantage, although Condit is surely [at a] black belt level himself. Just like most of the Diaz fights I have seen of late, this will come down to pace and cardio and the relentless attack. I believe Condit is a beast and has excellent strength and conditioning, but Diaz will wear him out and take over as the fight progresses. I am calling Diaz by unanimous decision in a “Fight of the Year” candidate.

Gabe Ruediger: It’s going to be a great fight. Both guys come in ready and just fight. I think Diaz has the hardest time with controlling wrestlers, which Condit is not. Diaz wins by late sub or TKO.

Keith Berry: I really want Condit in this fight. I think the “Natural Born Killer” will rise to the occasion and get the decision.

Mark Bocek: Diaz [wins], I think, but it’s a good fight, [with] high-volume punching from Nick. But Condit beat Ellenberger ... it’s a great fight. Whoever makes the first mistake will lose. 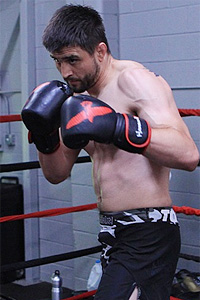 Carlos Condit File Photo
Condit is an underdog to the pros.
Jim Hettes: I gotta go with Diaz, not just because of his outstanding combination of jiu-jitsu and boxing, but [because] being employed by the UFC means I might actually come face-to-face with one of these fighters. I’m willing to bet Diaz will actually beat me up for picking against him (laughs), so let’s go Diaz.

Travis Wiuff: Diaz is unbeatable right now. I don’t see anyone beating him, including GSP. Diaz wins by TKO in the third round after the ref stops the fight.

Kyle Kingsbury: I got Diaz winning by chanting “209” until Condit taps.

Javier Vazquez: These are two of my favorite fighters. I think it's going to be a great fight [and] it’s going to be a back-and-forth war. I think Diaz is going to set a crazy pace and try to take Condit into deep water. I think, eventually, Diaz will be too much for Condit and will either submit him in the fifth round or will stop him via TKO in the fifth.

Nam Phan: Diaz all the way.

Ben Askren: I think Diaz will win. His standup has continued to improve, [and] I think he will out-strike Condit. We already know Diaz has him if it goes to the ground, so I think, barring a KO, Diaz takes it.

Michael Guymon: Diaz-Condit is so evenly matched in my eyes. I just see Diaz winning this one with his constant pressure style.

John Hackleman: I have Court McGee sitting right here next to me, and we both kind of agree. We both think Nick-Condit is going to be a lot like Nate [Diaz] and [Donald] Cerrone. Nick is a lot like Nate in style, and Cerrone’s style is a lot like Condit’s style. I think it’ll turn out the same. I think Condit will be sharper and land early. He might even cut Nick, heaven forbid. That’ll be a first (laughs). But I think Nick is going to weather an early storm, throw sharper techniques and he’s going to plow forward like he always does. I think he’s going to stop him in the third. So, yeah, the styles are the same, and it’s an interesting matchup because of that.

Joe Duarte: I got Diaz. He is as tough as they come. He probably even mouthwashes with bleach. Condit is good, but this one is going to come down to who is tougher. Diaz takes it.

Jeff Hougland: I can’t wait for this fight. I am a fan of both of these guys’ style. They are both well-rounded and don’t just fight to win; they fight to hurt their opponents. I think all the fans watching are in for an amazing fight. My pick is Diaz by third- or fourth-round TKO. I grew up in the 209, so I always root for the Diaz Brothers.

Benji Radach: This is going to be an awesome fight, but I gotta pull for Diaz. Both fighters are talented, but I think Diaz’s boxing is going to deliver the victory.