Last week eight contestants scuffled their way into the TUF house. This week eight more rounded out the selection for this season of “The Ultimate Fighter.”

Once again the entire show was comprised of fights, but we did see some future highlights that revealed an apparent in-house KO and perhaps the imbibing of urine. So hooray for us and the lowest common denominators out there.

Right to the action, as this week got started with the lightweights. Wesley Murch crossed the pond from England to try his hand at being the new Ultimate Fighter.

“I feel I'm carrying the pride of a nation on my shoulders,” Murch said.

While he also quoted Winston Churchill in his prefight interview, opponent John Polakowski was more from the school of Barney.

"I love giving hugs to everybody," said Polakowski of his casual demeanor.

I don't know much about Bristol, England, but I'll bet it's more head butts than hugs. Murch seemed to agree as he spent the first half of the round on top of Polakowski, delivering blows from within his guard. Polakowski stayed busy from below by working in some small shots.

The second half of the round saw much of the same action, only with a role reversal as Polakowski took the top. When the round ended, Murch was in visible pain with a shin injury. He stepped back out to start round two, but after throwing a kick, he crumbled in agony and Polakowski was awarded the win.

"I like to hug too," said Nogueira afterward, laughing as Polakowski handed out the love.

Mir wasn't as enthused. He threatened to put a "three-second rule" on all forthcoming hugs.

Sean O'Connell said he was inspired by Forrest Griffin to try MMA. Shane Primm used himself as inspiration while putting on a nice display for the evaluation panel by demonstrating a little muay Thai and some good, patient jiu-jitsu against O'Connell.

After letting O'Connell work out some energy by dumping him, Primm went to work by using key locks to transition into side control and then finishing O'Connell with a very tight rear-naked choke in the first round. 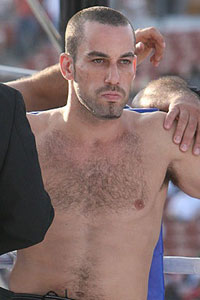 Dave Mandel/Sherdog.com
Ido Pariente came up short
against Efrain Escudero.
Ido Pariente hails from Israel and was excited to bring some country pride to his lightweight fight against Efrain Escudero. Escudero started the violence quickly, however. After he scored with some body shots, Escudero slowed things down and methodically worked himself onto Pariente's back. Escudero then moved with a sense of urgency to finish by modifying a rear-naked choke into a hellish choke/crank that turned Pariente's head purple. Moti Horenstein's UFC records stay safe for now.

Ryan Lopez from Oklahoma claimed to be a "bounty hunter by day, fighter by night." His opponent at 205 pounds was Tom Lawlor, who seems to be a fighter day and night with no shift change.

Lawlor made it look simple and choked out Lopez quickly with a rear-naked choke. Although Lawlor will be staying with the show, Lopez is free to put Dog the Bounty Hunter's records in danger.

Next up was a matchup of tall lightweights in what Dana White called the "Battle of the Beanpoles." Roli Delgado and George Roop engaged in a very sloppy fight as neither was prepared to see an opponent with equal height. Only the highlights of this fight were shown, but Frank Mir was impressed with Roop after he had listened to Mir's instruction and removed himself from a deep guillotine by adjusting accordingly. Roop held on to win the decision.

“He's got the eyes of a tiger," said Nogueira of Ryan "Darth" Bader during his fight with Kyle Kingsbury.

Ironically, a special design had been shaved into the chest, and dare I say neck/back hair of Kingsbury, that had him looking like one of my beloved childhood toys, the Ewok. Bader's superior wrestling kept Kingsbury at bay in the first round and proved to be the deciding factor in the second before he secured an arm-triangle choke that forced Kingsbury to tap. Both coaches and White were impressed with Kingsbury even with the loss. Mir lamented his leaving the house when it seemed obvious to the trio that Kingsbury was as good as the rest of the Ewoks -- err, contestants.

On a mental note, put Kingsbury on your "first alternate" list in case any light heavyweights decide to pull a Jesse Taylor.

Charles Diaz had Mir convinced he was tough, based on his words, until he stepped in the cage with Shane Nelson and a different story was told. Diaz held on for the full fight, but was buried under a barrage of punches and knees. Nelson impressed everyone with his performance.

"Nelson, that kid's a good fighter," said Nogueira, who called Nelson one of the best lightweights this season.

Eliot MarshallEliot Marshall’s bout with Karn Grigoryan looked like it could be a war between two big, mean 205-pounders. Grigoryan employed the backyard-bully technique in the first round by disregarding Marshall’s attempts to instill a working guard and scoring with some ground-and-pound.

In round two Mir had spotted a flaw in Grigoryan's style and cautioned Marshall to throw a right hand every time Grigoryan lifted his foot. The method paid off, and Marshall seemed to take the second round and force an extra period.

Marshall used an omaplata attempt to sweep, only to get swept himself, then to sweep again, then again -- well, you get the picture. Marshall seemed to have the upper hand in the final round as Grigoryan's nose poured like a faucet. Mir reminded Marshall to raise his hands after the fight, certain he had won. White read the results, however, and the bloodied and battered Grigoryan stole the decision.

Marshall turned to White in protest, and White acknowledged he had good reason to complain. Before Marshall's complaints got a chance to echo off the walls, though, it was announced that he will be coming back because Antwain Britt had been injured during his win.

Next week we will finally see these 16 enter the TUF house and training area. A flubbed line by White finished the show well. During a preview of upcoming episodes, he was quoted as saying you don’t vote each other off on “The Ultimate Fighter,” you beat each other off.

“That didn’t sound good, did it?” he added quickly.