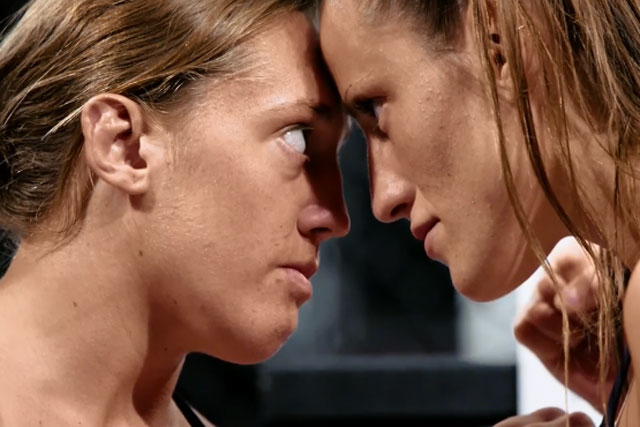 Leah Letson and Bea Malecki collide in this episode of “The Ultimate Fighter.”


Welcome back for Episode 6 of “The Ultimate Fighter” Season 28, where we immediately dive in to Leah Letson’s fighting career. She dropped her first bout, but took the loss in stride, admitting the loss was the best thing that could have happened to her because it helped her shore up her deficiencies. After that loss, she’s won her next four.

Her most recent bout, a 2017 victory over former Ultimate Fighting Championship fighter Elizabeth Phillips inside the Invicta FC cage, Letson owns one of only four head-kick knockouts in the promotion’s history, and the only scored as a clean knockout. In a promotion that has only recorded a baker’s dozen clean knockouts, this stands on any Invicta FC highlight reel. The knockout was so noteworthy that the UFC signed her to fight Yana Kunitskaya, only to scrap that bout so Kunitskaya could fight Cristiane Justino, and then the UFC put Letson on this season of “TUF.”

Carrying on the issues from prior episodes, Letson’s concern about not getting coached right and working hard enough rears its ugly head when Letson announces she’s switching teams after the fight with Bea Malecki. She does give a caveat to that though -- if the fight goes well and she feels supported, she’ll stick it out.

Jumping over to the team Letson wants to join, Kelvin Gastelum brings in foe-turned-friend Uriah Hall as a guest coach to give his team yet another training perspective. As with the other guests Gastelum has brought in, the team is thrilled with Hall helping.

We make the smooth transition from team training to Malecki’s own training session, where she explains that while she lacks mixed martial arts experience, she has more muay Thai bouts than she can remember. As a kickboxer, she admits she would prefer the fight not to go to the ground, but expects that her opponent will try to get it there.

At long last, Letson is finally given the one-on-one coaching she has pined for the whole season, and feels comfortable. Whittaker points out most apropos that he has an entire team to get ready in a season, so he can only give specialized attention to fighters when their fight is coming. As she receives the more challenging training she desires, all of her concerns drain away.

We switch gears to Malecki’s home video, to her hometown outside of Stockholm, Sweden. Living with her parents and brother, she does not have to deal with maintaining a household while she focuses on training. She gardens as a hobby. Training with other UFC athletes like Alexander Gustafsson, Ilir Latifi and the Teymur brothers, she works with some of the best the world has to offer.

From there, we go right to Letson’s home video, where she introduces her living situation in a dangerous part of Milwaukee. She repeatedly explains that she lives in a bad neighborhood -- a place so bad that she feels the need to carry a gun to protect herself. When not training at Pura Vida BJJ with the likes of UFC veteran Zak Ottow, where she gets all the one-on-one training she wants, she lives as a self-described “adrenaline junkie.” In addition, she currently serves as a Staff Sergeant in the Air National Guard as a radar technician, and speaks of her deployment to the United Arab Emirates last year.

Both fighters hit the scales without issue, and when they face off Letson can’t help but crack a smile. This good humor carries over to the night before the fight, where both Letson and Malecki get their hair prepared for battle. In a rare display of camaraderie before combat, the two goof around knowing they still have to fight each other the next day.

Tale of the Tape: Malecki vs. Letson

Referee Chris Tognoni is the third member inside the cage, and we are set to go. Both women charge towards one another as soon as the fight begins, and the first 15 seconds plays out as an entertaining brawl. Putting forth more pressure, Letson gets Malecki against the cage and constantly throws short punches while getting the underhooks. This continues until Malecki goes for a throw that Letson counters and the fight ends up back on the feet. Using her reach, Malecki stays in kicking range, landing some solid kicks to the body and legs of her opponent while Letson counters with overhand looping punches. In one exchange, Letson gets cut right smack in the center of her forehead and blood starts flowing instantly. The action continues until Letson gets stung with an elbow and she initiates a clinch to land her first takedown of the contest. In side control with blood streaming down on to her opponent, Letson performs her own version of “ You don’t know where I’ve been, Lou” for about 30 seconds as Malecki scrambles to get back to her feet, where the round ends in the clinch position.

The second stanza starts with Malecki using her range and Letson trying to close the distance to land power shots. The pace slows for a moment, and Malecki starts throwing elbows which Letson does not appreciate. Letson tries to clinch and go for another takedown, but Malecki executes a throw and takes Letson’s back. Almost sinking in a rear-naked choke with no hooks, Letson manages to breaks free only to go for a takedown of her own; it’s successful. With three minutes left in the center of the cage, Letson has the advantage now as she stays busy enough in her opponent’s guard to keep the fight where it is. None of her strikes are particularly impactful, but they do start to add up on the scorecards as almost everyone on Team Whittaker shouts for Letson to throw elbows. Letson advances to half guard while keeping top control and doing just enough to not let the ref stand things up. The fight ends in that position, and while Malecki’s face is sheathed in a crimson mask, it’s largely not her own blood. After a grueling and bloody battle, Letson emerges the victor by unanimous decision.

Of the two, Letson shows much more visible damage with the cut on her head and swelling all over, but her pressure and control were the deciding factors. In a surprising turn of events, Team Whittaker has now tied the competition at 3-3 after starting off losing their first three.

With six of the eight heavyweights having already competed, the announcement of the last heavyweight matchup of the opening stage is a mere formality: Team Whittaker’s Juan Francisco Espino Diepa against Team Gastelum’s Ben Sosoli. The two men avoid eye contract in the initial staredown, and both coaches praise the matchup and as expected, feel their fighter will win.