So, did you hear this Fedor guy lost?

The five best moments of Strikeforce/M-1 Global “Fedor vs. Werdum” follow, and you get one guess as to what tops the list.

Werdum Does the Impossible … In 69 Seconds

Business as usual for Fedor Emelianenko has come to mean him trampling some poor soul until the referee decides to step in on behalf of human sympathy. At first it seemed as though Fabricio Werdum would be so much fodder for Emelianenko’s brutal brilliance. Then the Brazilian put the fear of God in Fedor fans the world over by nearly catching the dead-eyed Russian in an armbar.

As he has done so many times before, Emelianenko escaped with ease, but what he did next was downright puzzling: He continued to ignore the fact that he was in the guard of one of the greatest Brazilian jiu-jitsu practitioners on the planet. Werdum responded to that strategic error by sinking in a triangle choke that not even the greatest heavyweight of all time could escape.

That moment when Werdum clamped down on the technique and no one was sure what would happen -- well, it’s moments like that that bring into full focus what separates MMA from any sport you could name.

It’s a statement that was regarded as ironclad law in some circles and one that ended with a single feeble tap. The image of Fabricio Werdum’s brilliant triangle choke submission of Emelianenko will live on for as long as this sport lasts and rightfully so.

What Werdum did on June 26, 2010, will be remembered for many things -- the fall of Fedor likely being the biggest -- but it should be remembered as the night the MMA world was reminded that nothing in sports lasts forever, no matter how hard you try to convince yourself otherwise.

Kim Winslow Shows What Refereeing Is About 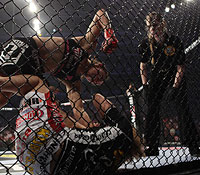 Dave Mandel/Sherdog.com
Referee Kim Winslow (far right).
Anyone interested in what a 10-7 round in MMA looks like should watch the first round of the so-called “fight” between Strikeforce women’s 145-pound champion Cristiane “Cyborg” Santos and Jan Finney. While a point deduction kept it from being an actual 10-7 in my book, it was still a visceral beating that seemed to tap into a universal sort of compassion from MMA fans and analysts.

Finney gamely came out for the second round, and the beating resumed without an ounce of restraint from Santos. Referee Kim Winslow finally called off the match at 2:56 into the second round and in doing so showed a tremendous ability to ignore the blows Santos was landing and focus on the fact that Finney was still intelligently defending herself.

Many have labeled Winslow’s performance incompetent. I say it was one of the best examples of refereeing in a sport desperately in need of quality cage generals.

If you want to inspire greatness in Cung Le, just take away his pizza and chocolate chip cookies for a few weeks. With the questions about his commitment to MMA only growing louder after his disastrous TKO loss to Scott Smith last year, Le ditched the junk food for the hotly anticipated rematch and outclassed Smith for nearly every minute of the fight.

The cherry on Le’s fistic masterpiece was a crumpling spinning back kick to Smith’s liver that seemed to suck the oxygen right out of his former conqueror’s blood. With that perfect meeting of skill and athleticism, Le resurrected some of the hype he lost when his unblemished record fell by the wayside.

Whether or not the allure of Hollywood paychecks keeps Le from building on his greatest moment remains to be seen, but what he did tonight is good enough -- at least for now.

After splitting the first two rounds on my scorecard, it was clear the bout between Josh Thomson and Pat Healy would come down to a game of conditioning. While Thomson seemed to be the fresher fighter, Healy’s rugged style seemed well-suited to covering up for his wheezing lungs.

Just as Healy seemed set to take the top control he so desperately needed to win, Thomson deftly turned the tables and latched onto his back. A deep rear-naked choke was quickly wrapped around Healy’s neck, but he resisted logic and instinct by refusing to tap out for several agonizing seconds.

Human physiology finally won out, and Thomson walked away with the win in a match he could not afford to lose.