“If you ain’t cheating, you ain’t trying.” A quote attributed to NASCAR driver Richard Petty, as well as every other major name in the sports world, it rings true for the fight game as well. We will save the coverage of the in-cage entertainment for another day, with various displays of “Dundasso” on full display even at the highest echelon of the sport. Instead, it is the cheating of many figures outside of the cage and ring that merits its own magnifying glass.

While an overwhelming majority of Fight Finder interactions between submitter and staff go swimmingly, some can grow complicated. Sadly, the sport of MMA is not immune to corruption, as fighters, management teams and even promoters try to put one over on each other. The Fight Finder team is a diligent one, who do not simply breeze through and rubber stamp requests that come to our digital doorsteps.

When things go wrong for submissions, sometimes they go very wrong. Fighters or their representatives have threatened the safety (and eyebrows) of international staff members, attempted to intimidate the team with potential legal action, harassed staff on their private communications, and even sought to bribe members to look the other way. Some submitters are more discreet than others, but it does not make what they do less troubling.

There are levels to this game when it comes to combat, and the same goes for when it comes to fraudulent submissions. It is one thing to pass off a false claim of a fight taking place or not taking place. It is quite another to go through the effort to falsify documents – judges’ scoring sheets are but one previous example. It is time for some more show and tell. Like before, the identities of the fighters and submitters have been redacted, but the images and documents are otherwise just as we have received them. 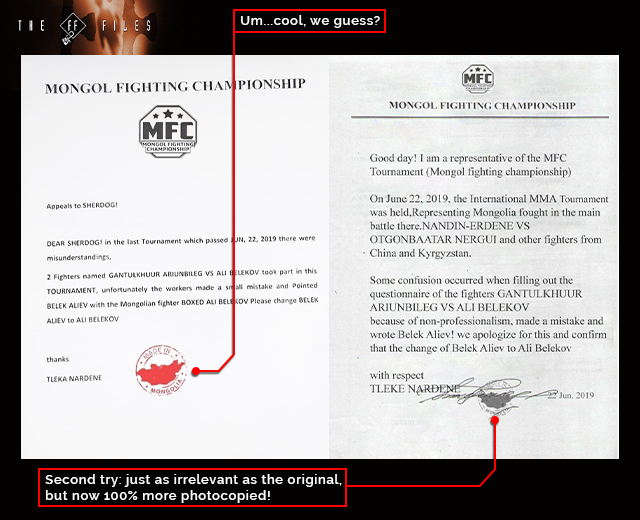 
A promoter can often verify the results of a match, whether a fighter competed for the promotion or if a bout never took place after all. Occasionally, some poor, unfortunate souls attempt to impersonate a promoter, sending in fake information to try to improperly vindicate their fighter. In this case, a fighter attempted to dispute his loss with a growing Mongolian organization – one that has played host to a few fighters that now compete in the Ultimate Fighting Championship or One Championship – and sent in these documents. The stamp really tied it all together, just like a good rug.

In an effort to pass off these documents as legitimate, the person used a red “Made in Mongolia” stamp you can find at an airport – when meeting BJ Penn, of course – and not one of an actual fight league. These false papers came in as the result of a months-long dispute where a competitor claimed he did not compete, and it was a man with a similar name instead causing this mix-up. After reviewing the typo-riddled paperwork, speaking with the actual promoter, and confronting the submitter with this information and their falsehoods, the fighter apologized and claimed he took the fight on short notice hoping that a loss would not go on his permanent record. Needless to say, any future fight of his will be reviewed with a fine-toothed comb. 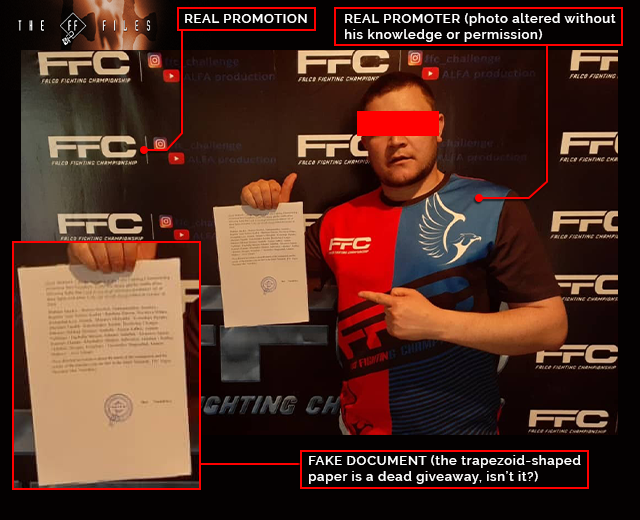 
Sometimes, truth is stranger than fiction. In an effort for a fighter to get a loss removed, his representative submitted a document he claimed came from the organizer himself. To do this, they somehow got their hands on a letterhead from the promotion, and poorly edited text placed on the sheet as evidence. The quality of the alteration was very low, and it was easily determined that this was a forgery. The submitter was not done, though, and decided that instead of cutting his losses, he would double down.

To do this, he used the image he sent to the Fight Finder staff, with the text on the sheet, and tried to superimpose that document in the hand of a major figure of the company. Much like an internet ad would blank out a t-shirt design and put their own logo on a famous figure posing for a picture, this laughable attempt at subterfuge was met with indignance and hostility. The person that edited the photograph of the man holding the document did not account for things that keen eyes on our team easily detected, and his claim fell short of the finish line. 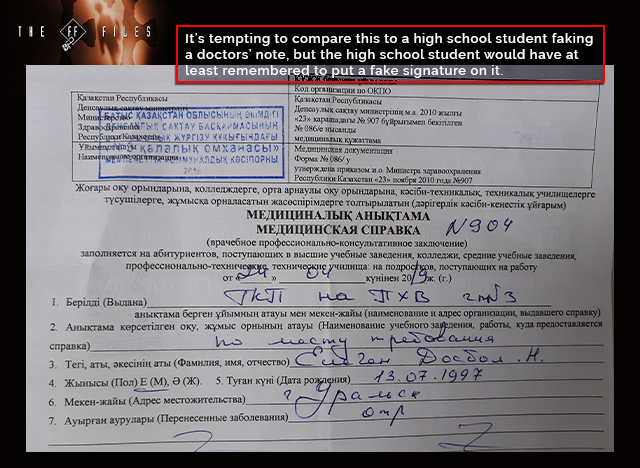 
One hapless fighter started off his career with a pair of losses to the same man, dropping the first by quick submission, and then coming up short by decision in a rematch 10 months later. As some fighters are wont to do, they try to get losses lifted from their record, especially if they go on to have success later on. This one in particular managed to establish a win streak – none of his subsequent four foes had ever won a match – but 4-0 looks better on paper than 4-2.

The fighter, who contacted us through his manager at the beginning, requested that the bouts be removed outright because they never happened. The trouble was, we had video of both fights happening, and we could identify them in each one. After challenging him on his claim, he reversed course and tried to pass off that it was not him in the matches, but instead another man with a similar name. Nope. His third try, which was not the charm, came as a request that these were amateur bouts and not professional, although he would not explain how or why this was the case.

The bouts were not amateur; to clarify, these defeats were both under professional rules, without protective equipment, and he admitted he was paid fight purses for both. The competitor decided it was in his best interest to keep plowing ahead, where he went on to state that he suffered an injury and went pro after a certain date, therefore the two losses that took place before it had to be amateur. To bolster his strange claim, he sent in a stamped medical form. In case you don't read the language, we can summarize: the document did not specify that the fighter was withheld from professional competition because of an injury, it did not actually diagnose or list any injury, and the doctor never signed the form.

As the cherry on top, in certain parts of the world, people can purchase these kinds of doctor’s notes or medical certificates from their physicians. The doctor, who would theoretically put their medical license at risk with a meaningless document like this, may do this under the expectation that the audience cannot read the document or that it will not be reviewed by medical professionals in their country. The paper was not worth the ink printed on it, and his request was summarily rejected.

In the span of 26 minutes, the fighter cruised through the five Kubler-Ross stages of grief with email after increasingly erratic email, and he concluded his barrage with a brief apology. A few months later, he tried again and sent in a photoshopped edit of his Fight Finder page with a zero placed atop his loss total. Five months after that, he sent in a news article that proved nothing except that he fought on the card, and was subsequently issued a final warning that his public Fight Finder profile would be updated to display that he has attempted to commit fraud.

You should still send all your Fight Finder-related requests to [email protected], as long as you do not try to pull something like any of these geniuses.

« Previous The FF-Files: Smoke ‘Em if you Got ‘Em