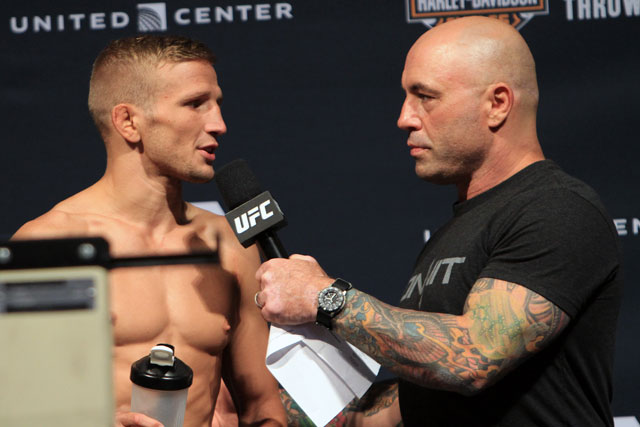 
During their first fight at UFC 173, nobody gave T.J. Dillashaw much of a shot to stop Renan Barao and grab the bantamweight belt from the Brazilian champion. At UFC on Fox 16 on Saturday in Chicago, he was the favorite, but he still could not be stopped.

Dillashaw’s trademark walkout song, “Can’t Stop” by the Red Hot Chili Peppers, might fit the Team Alpha Male product’s fighting style better than any other theme in mixed martial arts. Dillashaw’s monkey-style footwork and quick-twitch striking overwhelmed Barao, just as it did in their first meeting.

It seems that all Barao does is win, unless his opponent is Dillashaw. Aside from his first professional fight, which was a unanimous-decision loss to Joao Paulo Rodrigues de Souza at Heat FC 3 “Metamorphis” back in 2005, Barao has defeated every other opponent he has faced. His entrance song, “All I Do Is Win” by DJ Khaled, would be fitting only if he had retired before fighting Dillashaw.

Miesha Tate showed the “Eye of the Tiger” on Saturday night. The No. 2 contender in the women’s bantamweight division walked out to Katy Perry’s “Roar” like she usually does, and showed the determination that has become a trademark of the wrestler. After a couple of stiff shots from Jessica Eye, the area around Tate’s eye became red. After a few blinks, the former Strikeforce champion put the pedal to the metal and dominated Eye in the second and third rounds, setting up a likely trilogy with champion Ronda Rousey (so long as Rousey tops Bethe Correia at UFC 190).

Takanori Gomi could not move once the legs of Joe Lauzon were wrapped around him, fitting of Lauzon’s walkout music. “Move” by Thousand Foot Krutch played when Lauzon entered the United Center, and maybe that’s what Lauzon was daring Gomi to do as he dominated the Japanese legend. Edson Barboza walked out to “Meus Proprios Meios” by Officina G3 before his unanimous decision victory over Paul Felder. Meus proprios meios translates from Portuguese to “my own means,” and Barboza was able to stay in his comfort zone and keep the fight on the feet despite devastating spinning backfists from Felder.

Other classics selected included Eddie Wineland’s pick of “Back in the Saddle” by Aerosmith, Bryan Caraway’s selection of “Push It” by Salt N’ Peppa, and Daron Cruickshank’s walkout tune “Trouble” by Elvis Presley. A rundown of the UFC on Fox 16 walkout soundtrack follows: