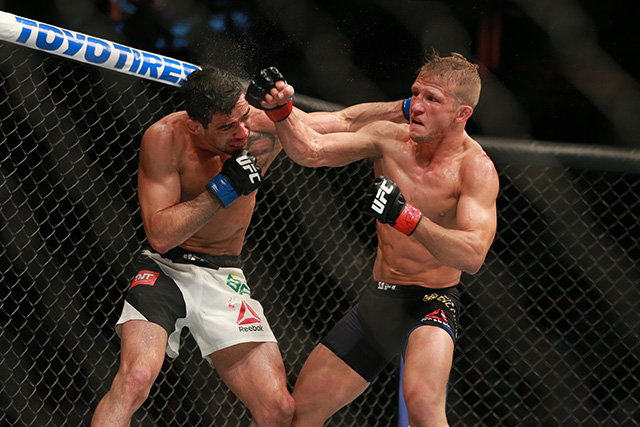 
It has been a rough week or so for the Ultimate Fighting Championship, so UFC on Fox 16 could not have come along at a better time for the promotion. A fan and media insurrection followed the UFC’s decision to let go of popular cutman Jacob “Stitch” Duran on the heels of his mild criticism of the Reebok apparel deal; and considering the overwhelming negative response to said deal, it was interesting to see how the public reacted once the actual fights resumed. If UFC on Fox 16 was any indication, the upheaval may have been short-lived.

As has become custom, the UFC stacked its Fox-show lineup with a slate full of action fights, and for the most part, the combatants came through with flying colors on Saturday at the United Center in Chicago. Bantamweight titleholder T.J. Dillashaw carved up Renan Barao once again to retain the title he snatched from him a little more than a year ago in the main event. It was another impressive performance for the young champion, who seems to have few worthy challengers, aside from the anticipated return of former 135-pound boss Dominick Cruz, hopefully by year’s end.

I was one of many who advocated for Cruz to be stripped of the championship when he was injured yet again in 2014, not because I didn’t think he wasn’t the best bantamweight in the world. I thought he might have some trouble coming back after such a long layoff to face a killer like Barao, who was on a massive winning streak. He alleviated those concerns when he returned late last year and brutally dismantled Takaya Mizugaki in 61 seconds. We were all salivating for a Dillashaw-Cruz matchup to clarify the top of the division before “The Dominator” was cut down by yet another injury.

If Cruz can live up to his recently stated timeline to return, he will have been out of action for a little more than a year. He never wanted to give up the belt anyway, and I doubt he will have an issue stepping right back into a title fight. So, Joe Silva, let’s do the right thing, my friend: Book Dillashaw-Cruz as soon as the former champion gets cleared to fight. He never lost the belt in the cage and should be given the chance to reclaim his rightful spot atop the division.

It won’t be an easy task. Returning from his third ACL injury in the span of four years while only fighting once during that period will make things difficult. Add in how well Dillashaw has performed and the feud Cruz has waged against his Team Alpha Male brethren, and you have the potential for an instant classic.

MAIN CARD THOUGHTS: Miesha Tate survived an early barrage from Jessica Eye in the co-main event before getting her own striking game untracked en route to a dominant unanimous decision victory, setting up a third fight with bantamweight champion Ronda Rousey. Tate has proven to be the second-best fighter in her division, and though not too many people think she can knock off archrival Rousey -- the champion is scheduled to publically flog Bethe Correia at UFC 190 -- she has clearly earned the right to try by notching her fourth consecutive win. As the only woman to extend Rousey beyond the first round in her 11 professional fights, I guess it makes sense to book the fight. What it really highlights is the lack of depth in the division. Rousey is clearly the best fighter in the weight class, and it is not even remotely close. Rousey will be a resounding favorite heading into a third bout with Tate ... On paper, Edson Barboza’s lightweight showdown with Paul Felder seemed to be a fight fan’s dream, and they did everything in their power to deliver the violence. They looked like a couple Tasmanian Devils in the cage at certain points, with both fighters going on spinning rampages multiple times throughout the scrap. The most notable twirling attack came when Barboza slammed a spinning back kick right into Felder’s nether region, flooring the Donald Cerrone protégé and eliciting a warning from the referee. Felder shook off the low blow and got back in the fray. After swelling and bloodying Barboza’s eye early in the first frame, Felder had a hard time getting things going against his faster opponent. He showed off unbelievable toughness, but in the end, it was not enough. He wound up on the wrong side of a unanimous decision. Neither fighter’s stock should suffer from the spirited affair ... It is unfortunately time for Takanori Gomi to hang up the gloves, at least at the highest levels of MMA. He was thoroughly outclassed by Joe Lauzon and showed he has little left in the tank when it comes to the UFC’s lightweight division. Gomi was one of the best lightweights at one point, but that was a long time ago. Lauzon is very skilled and one of the most exciting fighters -- as evidenced by his myriad of post-fight performance bonuses -- in the division, but he will never be mistaken for a top-5 guy. He made Gomi look like the journeyman he has become, even stopping the fight on his own after he determined enough punishment had been dished out. MMA is a cruel master, and once again, Father Time has done a number on one of the greats of the sport.

UNDERCARD SHOTS: Tom Lawlor sent Gian Villante crashing to the mat with a perfect right hook to end their light heavyweight bout. Lawlor jumped up from middleweight to take the fight and weighed in at just 203 pounds. He looked quite a bit smaller than Villante and was having trouble getting to his bigger foe early in the fight. Early in the second round, that all changed, as a bloodied Lawlor, who had been away from the cage for 27 months, lined up Villante and dropped him in spectacular fashion.

PINK-SLIP DERBY: The chopping-block leaders in the clubhouse have to be Gomi, Jessamyn Duke, Danny Castillo and maybe even Eddie Wineland. Each of these fighters could make a case to stick around, but it is a very crowded roster and there may not be enough room for all of them ... Gomi could be a draw in Japan, but the UFC does one show a year there and his medical suspension would probably preclude him from competing in his homeland in September. Chances he is cut: 70 percent ... Duke is a member of Rousey’s crew, and that could be her saving grace. She has dropped three straight fights, and despite her willingness to throw down, she has just not enjoyed enough success to warrant her spot at this point. Chances she is cut: 80 percent ... Castillo is an interesting case study. He is a guy who has fought everyone and anyone the UFC has put in front of him. I know people don’t really like the term gatekeeper, but I look at it a little differently. To me, it represents a fighter who is just outside the upper-echelon and is a barometer by which other fighters are measured. Castillo fits this bill. He will beat almost everyone in the division, save for the best of the best. He has gone 1-4 in his last five bouts but against some pretty stiff competition. That could keep him safe, but in the bustling lightweight division, there may not be room for a guy who has dropped three in a row. Chances he gets cut: 50 percent ... As for Wineland, this may come down to his decision. He has lost three out of four fights and suffered a pair of broken jaws along the way. During the broadcast, Joe Rogan noted that the former World Extreme Cagefighting champion was not sure he was going to come back after his last loss to Johnny Eduardo. Wineland’s decision defeat to Bryan Caraway may be the end of the line for one of the better bantamweights the sport has seen. Chances he gets cut or retires: 90 percent.