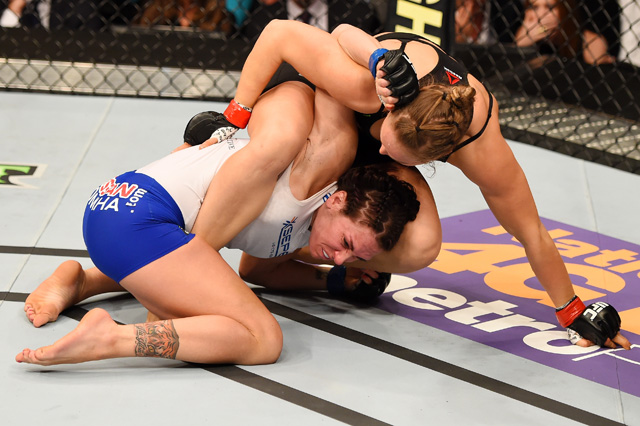 Ronda Rousey has finished all of her opponents. | Photo: Josh Hedges/UFC/Zuffa/Getty


LOS ANGELES -- Is anyone really surprised anymore when Ronda Rousey pulls off another crazy first-round finish? Me neither.

Cat Zingano sprinted across the cage as the opening bell rang for the UFC 184 main event on Saturday at the Staples Center, and just 14 seconds later, she was trapped and tapping out to a straight armbar from the champion. It has never been clearer: Rousey is light years ahead of her competition, and there is no real challenge coming from anyone on the Ultimate Fighting Championship’s women’s bantamweight roster anytime soon. Sure, Holly Holm could get there someday and Bethe Correira is hovering around, but the real money fight is with current Invicta Fighting Championships featherweight titleholder Cristiane Justino.

A year ago, I would have picked “Cyborg,” but after Rousey’s last few performances, I think it is clear that Rousey should be favored if Justino can ever make the 135-pound bantamweight limit, something she has thus far been unwilling or unable to do. It might be better for the UFC to leave that fight on the table a little longer, though. I am worried this Rousey phenomenon could go one of two ways at this point. People could continue to tune in to watch a remarkably dominant athlete do her thing despite the fact that they expect her to run through the random anonymous opponent -- think Mike Tyson in his prime -- or they might just decide that sub-30-second fights are not worth their hard-earned $60 when they can just catch them in their entirety in an animated gif later that night.


I am hopeful Rousey is the mega-star draw the UFC really needs, but her pay-per-view estimates have not been all that inspiring for the amount of press she gets and the amazing performances she puts on fight in and fight out. I think having her run through another opponent or two before setting up the super fight with “Cyborg” would be a prudent plan to extract as much of a buildup as possible.

In lieu of a Justino fight, the best-case scenario for Rousey and the UFC would be for a fighter to give her a legitimate test. Whether that results from a fighter surprising everyone or Rousey having an off night -- something that has not even come close to happening yet -- a vulnerable champion makes for a better story when trying to sell a fight.


NOT YET A THREAT: Holm has been advertised as the “best women’s boxer ever” and as a potential foil for a dominant Rousey. Her big-show debut against a game Raquel Pennington in the co-headliner left quite a bit to be desired considering the hype that accompanied her to the UFC. The first two rounds clearly belonged on Holm’s side of the ledger, but they were pedestrian at best.

The fight opened up a bit in the third frame, and Pennington took advantage of it. She landed some big shots and took her share of lumps, as well, in the most exciting and competitive round of the bout. Holm very well may live up to the expectations, but I just do not see her as a legitimate threat to the champion at this point. 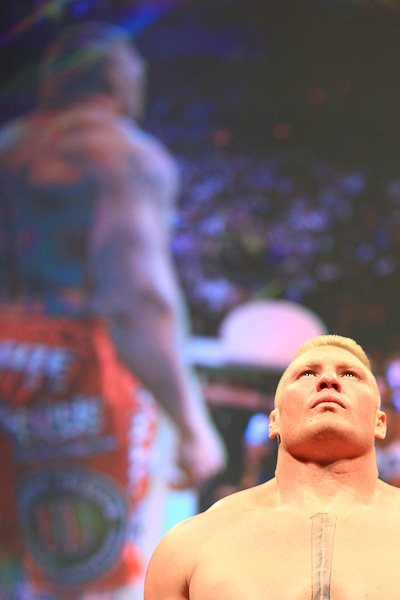 Photo: Sherdog.com
Lesnar made an appearance.
BIG BANG THEORY: Brock Lesnar was in attendance at UFC 184. The former UFC heavyweight champion has been working for World Wrestling Entertainment since leaving the promotion in 2011 and got mopped up his last two fights before heading back to professional wrestling. That will not prevent the UFC from chasing him when his WWE contract is up.

We have seen the UFC bring back Mirko Filipovic after a less-than-stellar run outside of the Octagon. The promotion is hurting for star power, and Lesnar represents the biggest bang it can get for its buck.

It is not a tough decision when considering how the market is shaping up. Either the UFC signs Lesnar or watches him be courted by its closest competition: Spike TV’s Bellator MMA. The UFC grabbed Phil Brooks, aka “CM Punk,” and he has never even competed at any level of mixed martial arts. Why would it not do everything in its power to re-sign Lesnar?

While I am certain Lesnar will reach out to UFC President Dana White, I can see him using MMA as leverage against the WWE’s Vince McMahon in hopes of extracting an even more favorable renewal. I would certainly expect MMA to be a last resort for Lesnar, who is now 37 and has not fought in more than three years. I know he battled diverticulitis during his most recent stint, but whether healthy or not, Lesnar will not be a champion again in the UFC, not with guys like Cain Velasquez, Fabricio Werdum, Travis Browne and Junior dos Santos patrolling the heavyweight division.


END OF THE ROAD: Josh Koscheck has had a damn good career. He was a top-three welterweight for a number of years and fought all the best guys, save for former American Kickboxing Academy teammate Jon Fitch, during his heyday. I don’t like to see other people try to run fighters out of the profession they have chosen, but honestly, he does not have anything left to prove.

It is obvious Koscheck will not be climbing back into contention, and he has not been close to the fighter he was at his peak. He now has a gym full of young lions, and after talking to him a couple weeks ago, it seems that is where his new focus and passion rests. I would never pretend to know what is in his best interest, but I wouldn’t be sad if Koscheck decided it was time to hang up his gloves.


HIGH FIVE: Tony Ferguson took out the ultra-sturdy Gleison Tibau in impressive fashion, winning by rear naked-choke in the opening frame. “El Cucuy” notched his fifth win in a row to solidify his position in the lightweight division. The statement victory over the winningest lightweight in UFC history should propel him to a matchup with a top-10 opponent in his next trip to the octagon.