Chuck Liddell has built his highlight reel by knocking out grapplers. On Saturday at UFC 88, though, he was the one knocked out when a perfectly timed overhand right from Rashad Evans left the former UFC light heavyweight champion on the ground unconscious.

“Well, we lead the fight with a groin kick because that’s usually the best way to get your [opponent’s] hands down to open up the overhand right,” joked Evans’ trainer, Greg Jackson, before offering his real assessment of the UFC 88 main event.

“It was a great fight. Rashad showed that he’s got punching power, that he’s maturing as a fighter. He’s got patience. He can set up a game plan and execute it.”

John Hackleman, who was in the opposite corner, was less enthusiastic.

“The first round went OK. [Liddell] wasn’t as crisp as I wanted. He wasn’t keeping his left hand up as much as I wanted,” said the founder of The Pit.

“When he came to the corner, I told him he won that round, but he needed to keep his hand up more, jab more. And second round, he got caught. I don’t know what to tell you. There’s really not much to it. He got caught.”

Hackleman implored Liddell to jab, circle, keep the left hand up, throw inside leg kicks, wait for the opening and let “bombs” fly when the opening came. He believes that Evans’ evasiveness may have frustrated his fighter in the first round. In fact, Hackleman had insisted that Liddell take his time and not get overzealous.

“If it’s going to be a boring fight, you’ll beat him,” Hackleman told Liddell between the first and second rounds.

Meanwhile, the New Mexico-based Jackson Submission Fighting camp was fleshing out one of its famous game plans. The first round, said Jackson, was about getting Liddell’s timing down.

“Rashad, did you get it?” Jackson asked in the corner between rounds. “Did you get his timing?” 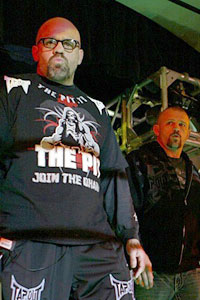 Jeff Sherwood/Sherdog.com
Trainer John Hackleman asked
Liddell to keep his left hand up
after the first round. The former
205-pound champion was knocked
out by a right hand minutes later.
“Yeah, I got it,” Evans answered.

“Are you sure you got his timing?”

“What that was is figuring out how [Liddell] punched, when he punched. It didn’t matter if [Evans] won or lost that [first] round because he was establishing his opponent’s timing so he can get around it … where you put a strike in between two strikes, in between his jab and his uppercut.

“Rashad was able to land that right hand because Chuck brings his left hand low. So [the first round] was Rashad kind of figuring it out, getting him frustrated, making him come into him. A lot actually happened in that round even though it looked like we lost it. We were actually getting ready to win the war.”

Evans was instructed to begin landing strikes in the second. Just hit him -- take over the fight. Jackson understood the way to beat Liddell’s equal-part power wrestling and striking was to avoid wrestling all together. Don’t chase him. Fight his fight but not on his terms.

“The big overhand right was always going to be there, especially after Chuck’s jab because Chuck drops his left low,” said Jackson, who added that the overhand was not his idea.

Having Keith Jardine -- another Jackson-trained fighter who holds a victory over Liddell -- in his camp and in his corner was a massive source of confidence for Evans, Jackson said.

“It was really important, as much for Rashad’s psychology, knowing that he trains everyday with a guy that had beaten Chuck. It was huge to help his nerves and keep him calm,” said Jackson. “Chuck Liddell is an amazing, amazing fighter. In a lot of ways, it was a very similar game plan even though I lied and said to everybody it wouldn’t be.”

Liddell’s trainer had expected Evans to be timid and unwilling to stand and trade. In fact, Liddell was prepared to take down “The Ultimate Fighter 2” winner if the fight dragged on. In Hackleman’s estimation, “The Iceman,” who has dropped three out of his last four fights, is upset but knows such a loss is simply part of the fight game.

The UFC megastar spent fight night in the hospital for safety precautions at the behest of UFC President Dana White, said Hackleman, but now he is in Cancun, Mexico, enjoying a weeklong break.

When he returns, his trainer of 17 years plans to sit down and discuss the future with him. Liddell had been expected to return to action in December if he defeated Evans.

“It’s definitely an option,” said Hackleman, who added that the 38-year-old Liddell has had no inclination of retirement. “Maybe he wants to jump right back on the horse. Maybe he wants to take some time off. Whatever he wants to do, I’m behind him on it.”

For Liddell, one of the sport’s greatest and most popular fighters, the UFC 88 main event may have signaled that he is approaching the tail end of his career. For Evans, the fight suggested that the talented mixed martial artist may have even greater things to come.

“I think we’re ready to fight Forrest [Griffin],” Jackson said. “I think Forrest is an amazing fighter. He’s a great guy and a phenomenal athlete, and it’ll be a real challenge and honor to coach against him and we’ll see what happens.”