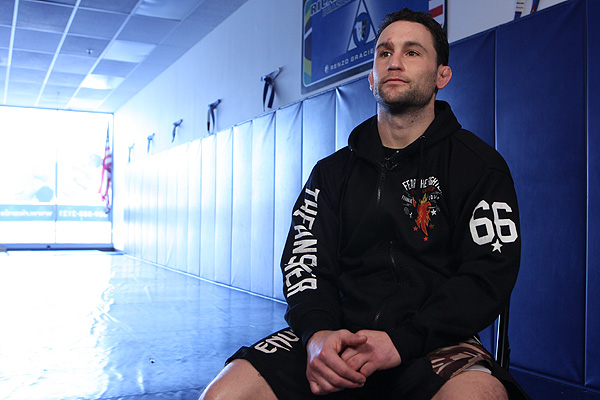 
For the past three years, Frankie Edgar has known nothing but Ultimate Fighting Championship title bouts. In fact, his last seven appearances have all come with promotional gold on the line, and he reached the championship rounds in all seven of them.

Edgar will re-familiarize himself with non-title fare when he clashes with Brazilian prospect Charles Oliveira in the UFC 162 co-main event on Saturday at the MGM Grand Garden Arena in Las Vegas. “The Answer,” who will be testing 145-pound waters for the second time, has not prepared for anything less than 25 minutes in the cage since he submitted Matt Veach with a rear-naked choke at “The Ultimate Fighter 10” Finale in December 2009.

While his primary focus remains on securing a return bout with the last man to defeat him, UFC featherweight champion Jose Aldo, Edgar welcomes the temporary change.

“The thing is, I actually consider it to be a blessing in disguise going back to a three-round fight,” Edgar said in a pre-fight interview with UFC.com. “It’s going to make me get out the gun early and make sure [in the] first round I’m in his face [and] I’m in that rhythm I like to be in [by] the fourth and fifth. When I get back to the title fights, I want to be able to do that right away in the first round, so it will last all the way to the fifth.”

Still only 23, Oliveira saw his modest two-fight winning streak snapped in a first-round knockout loss to the resurgent Cub Swanson at UFC 152 in September. The Macaco Gold Team export has compiled a 4-3 mark since arriving in the UFC three years ago, derailing a pair of “Ultimate Fighter” winners -- Efrain Escudero and Jonathan Brookins -- in the process. Oliveira will enter the cage with a four-inch height advantage, a fact not lost on Edgar.

“He’s tough. He’s dangerous, maybe the tallest guy I’ve ever fought,” he said. “[He has] got pretty good muay Thai [and] mixes it up well with kicks, knees [and] elbows. He’s got a slick submission game. He’s willing to go for broke to go for submissions. For him to take the fight to the ground, he has to be able to take me down. As long as I can defend takedowns pretty well, I can keep the fight standing or I can end up on top.”

Only five men in UFC history have landed more significant strikes than Edgar’s 827, and he has plans to trap his Brazilian counterpart on the feet. There, he can work the odd angles and set the frenetic tempo for which he has become known.

“I’m just going to try and push the pace and fight my fight,” Edgar said. “A lot of it has to do with standup, so that’s something I’m going to utilize in this fight. The biggest concern is making sure you show up and do everything you did throughout training camp, [that] all the preparation and what you prepared to do, put it to work and make it all work for you. I’m not going home disappointed.” 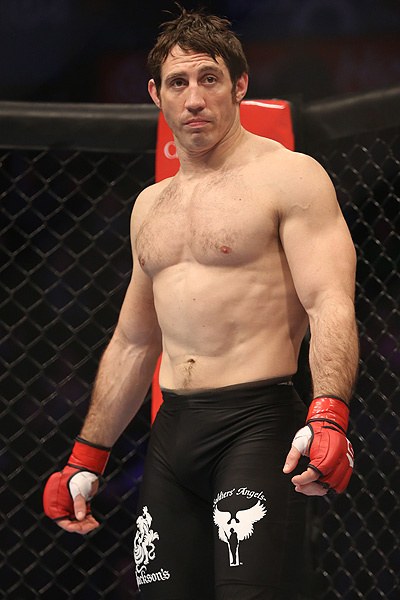 
Tim Kennedy realizes he has little room for error.

Though he has yet to be submitted as a professional mixed martial artist, Kennedy must contend with the otherworldly grappling skills of 10-time Brazilian jiu-jitsu world champion and three-time Abu Dhabi Combat Club Submission Wrestling World Championships medalist Roger Gracie in his promotional debut at UFC 162.

Gracie, a 31-year-old London-based Brazilian, has delivered five of his first six MMA victories by submission.

“I know that Roger is a very dangerous opponent,” said Kennedy, who has won six of his eight bouts in Strikeforce. “He is a lot more well-rounded than people give him credit for. He utilizes his jab very well and has exceptional takedowns. I think this is going to be a fantastic fight.”


The MGM Grand Garden Arena will host its 25th Ultimate Fighting Championship event, tying it with the nearby Mandalay Bay Events Center for most on the all-time list ... Middleweight champion Anderson Silva has won nearly twice as many bouts (17) during his current winning streak than challenger Chris Weidman has won (nine) in his entire career ... Reign MMA’s Mark Munoz was a two-time NCAA All-American at Oklahoma State University, where he racked up 121 career victories and won a national championship in 2001 ... Featherweight Dennis Siver has fought in seven different countries: the United States, Sweden, Australia, Germany, England, Ireland and Slovenia ... When Brian Melancon was born on May 28, 1982, the top five movies at the box office were “Rocky III,” “Conan the Barbarian,” “Visiting Hours,” “Dead Man Don’t Wear Plaid” and “Porky’s” ... Gabriel Gonzaga challenged Randy Couture for the UFC heavyweight championship five years, 10 months and 10 days ago, losing by third-round TKO ... All five of welterweight Mike Pierce’s defeats have come by decision, two of them split verdicts ... Norman Parke hails from Bushmills, a small village in Northern Ireland which is home to the oldest licensed distillery in the world ... Chris Leben was the first middleweight champion in World Extreme Cagefighting history, capturing the title with a second-round knockout against Mike Swick in January 2004 ... In six UFC appearances, former Ring of Combat lightweight titleholder Edson Barboza has been awarded four post-fight bonuses -- three for “Fight of the Night” and another for “Knockout of the Night” -- worth a total of $300,000.