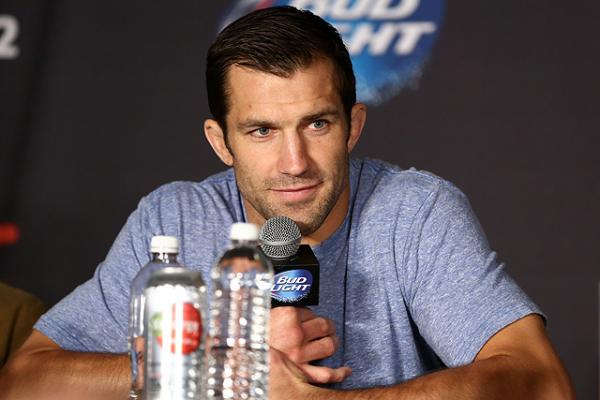 Luke Rockhold is 11-1 over his past 12 outings. | Photo: Dave Mandel/Sherdog.com


Luke Rockhold wasted no time inside the Octagon or on the microphone at UFC 172 on Saturday at the Baltimore Arena in Baltimore. After submitting Tim Boetsch 2:08 into the first round, he called out not one but two different fighters for possible middleweight bouts later this year.

“Looking at the division right now, there’s not [many guys ranked] ahead of me that are active,” the former Strikeforce champion said. “[Ronaldo] ‘Jacare’ [Souza] is a guy ahead of me, but I beat him already. [Michael] Bisping’s a guy that opened his mouth, and he’s still running it. I don’t think Tim Kennedy closed it yet, so I’d love to shut him up for good.”

Apparently not content with focusing on just one potential opponent, Rockhold also has revenge on his mind, namely in the form of a rematch with Vitor Belfort.

“It’s a loss, and I want to redeem myself,” said Rockhold, referring to his May 2013 knockout defeat to Belfort in Brazil. “I want to earn my title shot. Beating Vitor, I think, is the best way to do it -- the most honorable way. Obviously, it doesn’t sit well with me. Going down there and getting caught ... he caught me at the right time in my career, in my life, at the transition point. He came out with something he’s never done before. I feel a lot more comfortable now. I don’t think it really told the whole tale of me and him. I’d love to make a different ending to that story. I know I can beat the guy, and I want to beat him.”

Although Ultimate Fighting Championship President Dana White did not comment on the idea of a Rockhold-Bisping pairing, he did share some quick thoughts on Rockhold-Belfort 2.

“Not many people are calling Vitor out,” White said. “I respect that.”

White also complimented Rockhold on his win over Boetsch with one of his better quotes of the night.

“He looked good against Boetsh tonight,” White said. “He finished that fight and didn’t even mess up his hair.”

During the fight itself, Boetsch went for an early takedown, only to find himself trapped in an inverted triangle underneath Rockhold. The American Kickboxing Academy ace then used elbows to the body while working for a kimura, ultimately finishing “The Barbarian” with the maneuver.

“I look to finish with the kimura every time,” Rockhold said. “That’s a submission I do daily. That’s pretty much one of my main submissions, that and the guillotine. I go back and forth. I catch people everywhere with it. I knew exactly what I needed to do. You just have to get the right position, and I got it.”

In pushing his MMA record to an impressive 12-2, Rockhold has produced 10 of those wins with first-round knockouts or submissions. However, this was his first submission victory since Nov. 6, 2009. Before taking on Belfort or Bisping, Rockhold will first need to make sure his broken toe heals.

“It was [damaged] on the initial takedown,” he said. “I sprawled back and my toe got caught in the cage and something broke. I felt it right away, but you have to finish the job. It’s all good -- whatever. It’s a broken toe. It’s minor.” 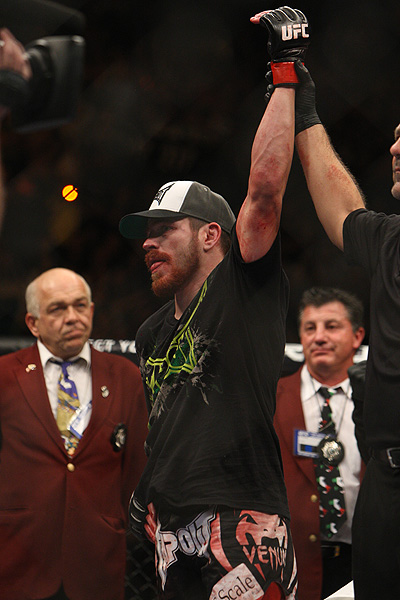 Photo: D. Mandel/Sherdog.com
Miller delivered again.
It seems like lightweight Jim Miller has been in the UFC forever.

Miller’s debut with the promotion came in October 2008 -- a lifetime ago in the world of MMA -- at UFC 89 in Birmingham, England, where his rear-naked choke victory over David Baron earned him “Submission of the Night” honors.

Fast forward to UFC 172, and he is still taking out people in the lightweight division. In fact, Miller picked up his 13th victory at 155 pounds, tying him with Gleison Tibau for the most wins by any lightweight in UFC history. By choking Yancy Medeiros unconscious with a first-round guillotine, Miller scored consecutive submissions for the first time in his UFC career. Medeiros had never been submitted before.

“I had a good angle,” Miller said. “I felt it cutting off circulation, and I knew he’d tap or go out. I’m here to beat the best; it’s not about the belt for me. I want the best competition and to prove myself. I hurt him with a body shot early and then was able to toss him and work my submission game. I’ve got the record for most submissions in my weight class, and I’m looking to add to that record every time.”

Despite his longevity in the division and wins over guys like Tibau, Joe Lauzon and Duane Ludwig, Miller has never been in a title fight. That could change if he can find the right opponent for his next appearance. Some of the names being thrown around at the post-fight press conference included Donald Cerrone and Khabib Nurmagomedov. Regardless, Miller wanted to make one belief clear: He is as well-rounded as any fighter you will find in the division. 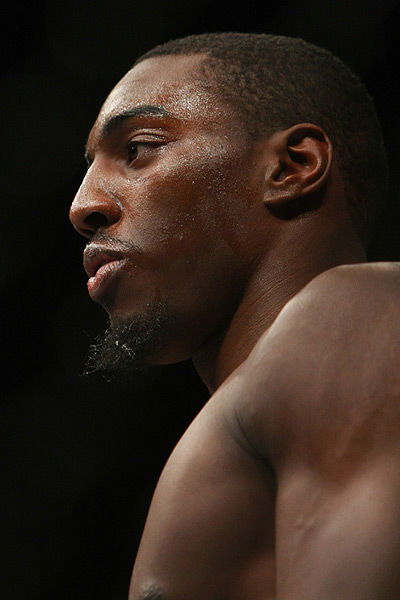 Photo: D. Mandel/Sherdog.com
Davis puzzled his boss.
Nobody is a better quote in MMA than White. Here is a collection of some of his more entertaining and informative quips at UFC 172 ... On Anthony Johnson returning to the Octagon as a light heavyweight with a unanimous decision over Phil Davis: “He was making 170 [pounds] when he was here [before], which probably wasn’t the right thing to do; but he did. He looks great at that weight. He looks like that’s the right size for him. He made weight. We’ll go from here and see what’s next with him. I thought he was going to gas out in the second or third round. I thought the combination of nerves and size and muscle [would result in fatigue] and I thought Davis would shoot more. [I thought] he’d have to defend a ton of takedowns. I was wrong. He looked good tonight; he looked like a veteran. He picked his punches, took his time [and] hurt him when he had him up against the fence. He looked great tonight. He looked really good.” … On Davis resorting to trash talking at the pre-fight press conference earlier in the week: “Anytime you talk to Phil outside of press conferences and stuff, he’s actually a really funny guy. He talks like that normally. I can’t figure the whole Phil thing out.” … On Belfort’s immediate future following recent bans on testosterone replacement therapy in MMA: “He’s fooling himself if that’s what he really thinks. He took a couple of home tests and [thinks] he’s ready to roll. Vitor has to clear up his Las Vegas issues. When he gets his Nevada situation figured out [he will fight again].” … On the UFC’s decision to bring back former heavyweight champion Andrei Arlovski: “The window is closing for Andre Arlovski. They really wanted to fight [here]. He’s always been an honorable guy and so has his manager, so I said yes.” … On “The Ultimate Fighter” Season 18 alum Jessamyn Duke’s unanimous decision loss to Bethe Correia: “She didn’t do enough to win. She didn’t let her hands go the way she should have.” … On fans booing UFC light heavyweight champion Jon Jones, as he bludgeoned Glover Teixeira and successfully defended the 205-pound title for the seventh time: “If I was him, I wouldn’t give two s---s if somebody booed me.”