The Ultimate Fighting Championship’s most marketable rivalry will finally get its second breath.

After a superlative 2015 campaign, the outspoken Conor McGregor entered his March showdown with Nate Diaz with an aura of destiny. At that point, McGregor was undefeated in the UFC and had not tasted defeat since an early career submission loss in 2010. After the Irishman tapped to a rear-naked choke from Diaz, the rematch was booked for UFC 200, but a maelstrom of drama surrounding press obligations and faux-retirement unfolded, pushing it back until now. This will be McGregor’s second fight above 145 pounds and his second fight of 2016.

On the other side of cage at UFC 202 on Saturday in Las Vegas will be longtime MMA antihero and cult favorite Diaz, who notched the most important win of his career when he throttled McGregor at UFC 196. Since then, he has become a bona fide star in the sport. The winner of “The Ultimate Fighter” Season 5 has nearly a decade of UFC fights under his belt, as well as stints in World Extreme Cagefighting and a one-off Strikeforce bout, making him a true veteran of the sport. Diaz is 3-3 in the UFC fighting above lightweight, and this will be his second fight of the year.

There are a lot of narrative and stylistic threads running through this fight, so let us see what the Tale of the Tape says: 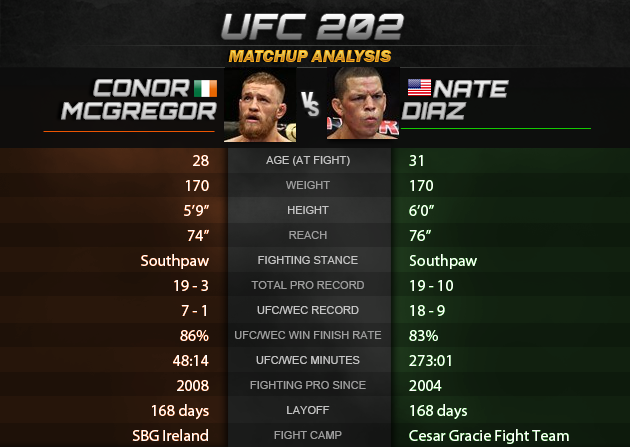 The anthropometric side of things favors Diaz, who is the larger, rangier fighter. Diaz also is more experienced and more comfortable at welterweight, whereas McGregor’s lone trip above featherweight ended with him tapping. The only other time McGregor has fought a taller opponent was his 2013 win against Max Holloway, and he has never fought anyone with a longer reach than Diaz.

The big difference between this fight and the first match is how both men are prepared this time around. In the first bout, McGregor was training for a completely different opponent and was readying himself for a shot at another title, which would have been an unprecedented feat had he won. When slated opponent Rafael dos Anjos pulled out with an injury, Diaz filled the void with 10 days’ notice.

The pendulum swings both ways here. On the one hand, Diaz was clearly at a disadvantage then because he was not in any kind of fight camp, while McGregor was actively training. At the same time, that kind of last-second changeup could have been psychologically deflating for McGregor, especially since it was not for a belt and was contested at a higher weight class than he had been preparing for. Whether or not the short notice affected one man more than the other does not matter; this time, both of them have had full camps that have been specifically tailored for each other, and thus the nature of the fight is different. It will be interesting to see who will benefit more, though it is worth noting that McGregor has the more obvious adjustments to make since he lost last time.

Barring any strategy that drastically deviates from the last fight, most of the rematch will again take place on the feet. Let us see how the striking numbers break down: 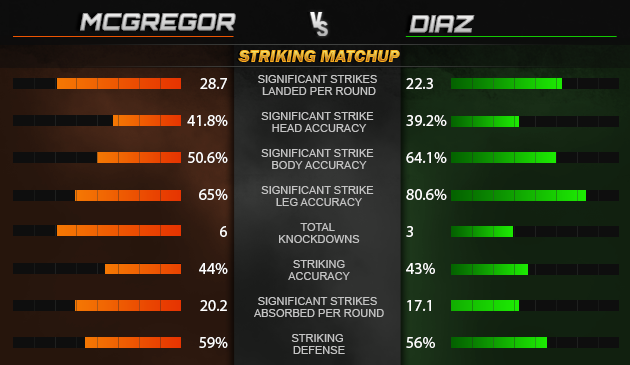 Both Diaz and McGregor are accomplished strikers, yet their styles are very different.

McGregor is a high-volume pressure fighter with a diverse arsenal of strikes at his disposal. He is a gifted power puncher with expert command of angles and mechanics, and he has a number of flashy yet still effective kicks that round out his game. For his multi-faceted techniques, his target is pretty predictable: 80 percent of his strikes are aimed at his opponent’s head, while 14 percent are to the body and six percent to the legs. Similarly, 86 percent of his strikes come at range while only three percent are in the clinch and 11 percent are to grounded opponents. Although he eats three more punches per round than Diaz does, he also punches opponents five more times per round. This tendency to be more active explains the differential, as his overall defense is better, if not negligibly so.

Diaz is also a high-volume pressure fighter but in a less pronounced and more patient way. Although he does have some kicks in his repertoire, he is primarily a boxer. He utilizes his long range to push opponents against the fence and open up with an accumulation of punches that eventually wears them down. Diaz is even less balanced than his Irish foe: 86 percent of his strikes go upstairs, while nine percent and five percent go to the body and legs. Predictably, he tends to strike at a distance, where 82 percent of his total striking output comes from. The clinch and ground make up for the remaining 12 percent and six percent of his strikes, respectively.

The X-factor here will be the power. In 19 fewer fights, McGregor has twice as many knockdowns as Diaz. Granted, all of those knockdowns were against featherweights, but Diaz nonetheless has not shown any kind of one-punch power; his striking is successful in its volume and attritional effects. They are going to engage in exchanges, and they are going to punch each other in the face a lot. If McGregor has figured out his cardio problems and can maintain an aggressive pace for longer, then it will be interesting to see if Diaz’s chin will continue to hold up as it always has.

Yet we cannot ignore the ground component, as it was ultimately how the last fight concluded. Here are the grappling statistics: 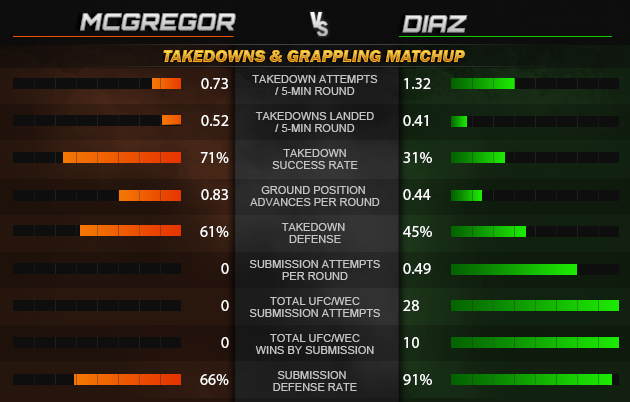 It probably comes as no surprise to hear that this is where Diaz will have his biggest advantage. He is not a very strong pure wrestler inasmuch as takedowns and positioning are concerned, but he is an offense-minded jiu-jitsu specialist with a crafty submission game. He attempts at least one takedown per round on average but completes less than a third of them. Once on the ground, he has several fight-ending options, though he has mostly favored chokes throughout his career. Though his submissions are high-percentage, Diaz also uses his jiu-jitsu to sweep opponents and work in better positions; he swept his opponent in nearly half of the fights in which he advanced position on the ground. An early-career loss in the WEC is the only time Diaz has been submitted, but it seems safe to say that he probably will not have to worry about that against McGregor. Similar to their first fight, if it goes to the ground, it will likely be a quick path to victory for the Cesar Gracie pupil.

After eight fights in the UFC, not much has changed regarding McGregor’s ground game. It is not that he has failed to improve in training camps, but there has not been much observable evidence of how he has been improving. The only times he has been on the ground for extended periods came against a short-notice Chad Mendes and a short-notice Diaz, and neither of those instances went well for him. What we have seen from McGregor is solid defensive wrestling to avoid going to the ground, and if it does get there, he has shown effective stalling and good scrambling to get back to his feet. Prior to shooting in on Diaz in their first fight, McGregor had only attempted takedowns against Holloway and Diego Brandao, so even though his numbers might look solid, there is only a very small sample size to analyze. He has still yet to attempt a submission in the UFC, and even though he has fought off two-thirds of the submission attempts he has faced in the promotion, all three of his career losses have been by submission. Needless to say, he should look to avoid this phase of the game altogether in order to maximize his chances to win.


In spite of their first meeting, the bookmakers have insisted that McGregor is still the favorite. This time, it is only slightly so. Depending where you look, “Notorious” is anywhere between -117 and -130, whereas Diaz is in the range of -110 to +110. Such variance shows how many narrative and stylistic angles there are to this rematch. On one hand, McGregor clearly took the first round last time and punched himself tired, but on the other hand, Diaz actually won the fight. With full, focused camps for both of them, it is anyone’s guess how it will play out. The pressure of a potential loss weighs much more heavily upon McGregor, though. Not only will it close the door on the rivalry with Diaz, but it will also send him back to 145 pounds with little leverage for future cross-division super fights. For Diaz, a loss would likely do little to dim his emerging stardom; if anything, it would only mean another monstrous payday somewhere down the line with a McGregor rubber match. No matter what happens, this has fireworks written all over it.