Champion will fight former champion at UFC Fight Night “Dillashaw vs. Cruz” on Sunday at the TD Garden in Boston.

Former bantamweight champion Dominick Cruz has been on the shelf for the greater part of the last four years due to a long string of broken hands, torn knee ligaments and a torn groin. Cruz was the final World Extreme Cagefighting champion and the Ultimate Fighting Championship’s inaugural titleholder at 135 pounds, but he vacated the title in January 2014 after more than two years of injury-induced inactivity. He briefly returned later that year and demolished Takeya Mizugaki, earning a title shot that would end up getting pushed back for another torn ACL. “The Dominator” has not lost a fight since dropping down from featherweight to bantamweight in 2008.


Meanwhile, incumbent champion T.J. Dillashaw is coming off of a relatively quiet year. After posting back-to-back three-fight years in 2013 and 2014 -- a run that also saw him capture and defend the UFC bantamweight title -- Dillashaw fought only once in 2015, defeating former champion Renan Barao for a second time in July. Still, Dillashaw has been a visible presence in the MMA world, changing fight camps and publicly feuding with former coach and mentor Urijah Faber. The fight against Cruz will be his third title defense, and a win would tie him with Barao for the most successful title defenses in division history.

It is a compelling clash between past and present, with a great deal to analyze. Here is what the tale of the tape says: 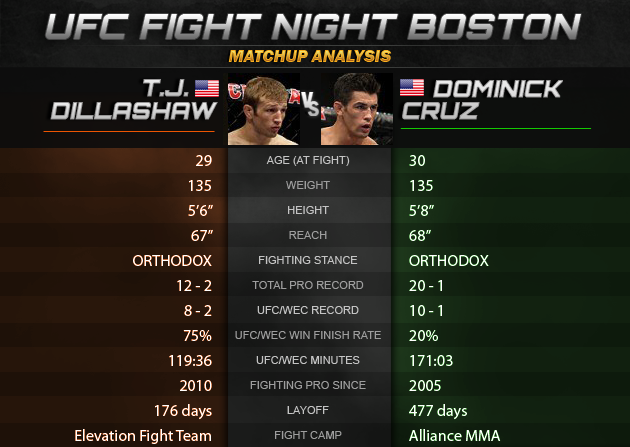 A few things stand out here. Cruz has a small anthropometric edge as the slightly taller and longer fighter, but the differences are negligible; and even though Cruz started his professional career five years before Dillashaw, he is only a year older and only has one more big-promotion fight under his belt. With that being said, Cruz has logged in more than two five-round title fights worth of time than Dillashaw during his Zuffa tenure, notable for the fact that it illuminates how much more prone Dillashaw is to finish a fight.

Since Cruz is involved, the big question will of course be about the layoffs. Dillashaw has been active and injury free, whereas Cruz has not fought in more than a year and only once in the last four years, all because of a host of injuries. Having more than a year to rest and rehab means Cruz could very well be perfectly healthy for the fight, and his last outing against Mizugaki was a spectacular performance off a long layoff; he should not be dismissed because of his dormancy. Still, it is hard not to count those 477 days against “The Dominator.”

On a final note, it is a stretch to call either of them a true orthodox fighter, since their style incorporates a great deal of stance switches and unorthodox movements. Indeed, one of the most intriguing aspects of this fight is to see how the two most distinct sets of striking footwork in the division and possibly the sport will match up against each other.

When they go toe-to-toe, here is what it will look like: Both the incumbent champion and former champion are elite strikers for the division, and in many ways, they are very similar. There are some key differences, though.

Dillashaw lands a lot more punches per minute and 12 more per round. Across a potential five-round fight, that is a game-changing difference. That difference is a reflection of accuracy more than total output, however. Cruz throws about as many strikes per round, but his style lends itself to lots of missed strikes, as well. Dillashaw is a master at using both backward and lateral movement to find clean angles and pop in and out of range. This tactic is made more effective by his stance-switching ambidexterity, which frees up more potential combination opportunities. A total of 83 percent of his strikes are aimed at the head, with 10 percent to the body and seven percent at the legs of his opponents. In line with that trend, 82 percent of his strikes come at distance, with eight percent in the clinch and 10 percent on the ground.

Cruz’s game takes a more measured, defense-oriented approach. He constantly flings fists and feints at his opponents, interrupting their rhythm and discovering their timing. Like Dillashaw, Cruz smoothly slides in and out of orthodox and southpaw stances, which allows him to create creative and unpredictable punch-kick combinations, as well as time takedown attempts perfectly. Cruz utilizes the crouch position off of feints better than anyone in the sport. From the crouch, he can lean back or slip punches laterally while keeping his hands down to deter takedown attempts, all without compromising his defense. The crouch can also be used to orchestrate an offensive burst before dancing out of range. Incidentally enough, Cruz’s numbers align pretty closely with that of his opponent. He headhunts in 86 percent of his strikes, allocating only 10 percent and four percent of his shots to the body and legs. Similarly, 87 percent of his strikes come at distance, with six percent in the clinch and seven percent to grounded opponents.

One major difference of note is the knockdown differential. With one less fight, Dillashaw has logged five more knockdowns than Cruz, who has never knocked an opponent to the floor in a major promotion. “The Dominator” has knocked out opponents before, though, but it appears Dillashaw has the advantage when it comes to one-punch power.

Though the fight will likely take place on the feet, wrestling will surely come into play, as well. Here is how the grappling matchup looks: 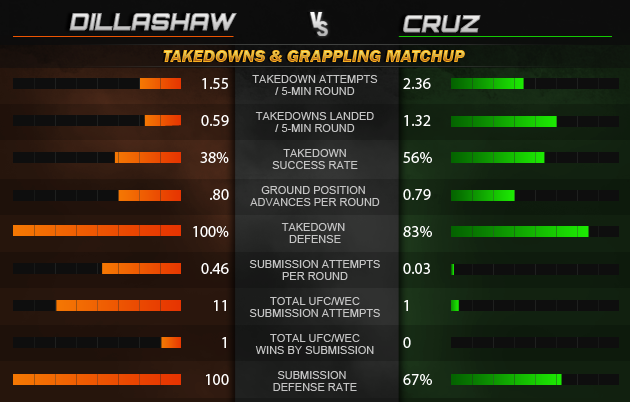 Dillashaw is a former Division 1 wrestler and a three-time NCAA tournament qualifier. Although there are more credentialed wrestlers in the UFC, Dillashaw has transferred his game into mixed martial arts as good as anyone has. Mostly, his wrestling is used defensively: No one has ever taken him down. Much of that has to do with the fact that he is always keeping his distance on the feet, but his sprawl is also top-notch. Offensively, Dillashaw has fine technique and timing. His takedowns serve as a tool to take the fight to the ground and as a way to give opponents another threat to worry about on the feet. When he does take the fight to the ground, Dillashaw has a heavy base and strong passing abilities mixed with relentless submissions. Overall, he is as active on the ground as he is on the feet, making the defending champion a difficult matchup and a well-rounded martial artist.

“The Dominator” does not have the wrestling background Dillashaw does, but he is a lethally effective grappler in his own right. Shifty footwork and an excellent sense of timing allow Cruz to shoot for several takedowns per round, which he completes just over half the time. He favors position over submission when on the ground, working for ways to smother his opponent and land punches. The only time he has been submitted as a professional was against Urijah Faber in 2007. Since then, only Joseph Benavidez has attempted to submit Cruz, and he was unsuccessful in both fights he tried. Cruz also tends to use takedowns as a part of his overall striking strategy. Because he switches between feints and actual takedown attempts so fluidly and frequently, it can paralyze opponents when he gets into rhythm. It will be interesting to see whether Cruz will be able to be the first man to take down Dillashaw in the UFC or if the defending champion will be too athletic for it; Cruz has a stifling top game that sucks away rounds, and we have never seen Dillashaw work off his back.


This is an exceptionally close fight, and the betting lines reflect that. Dillashaw is a narrow favorite anywhere from -132 to -150. Likewise, Cruz is between a +105 and +120 underdog. Since Cruz has been out of the Octagon for so long, it is difficult to assess how he will perform. Will he be physically able to implement his trademark fancy footwork? Will ring rust be an issue? Dillashaw also has questions of his own to answer. Will he still have the same advantages over “The Dominator” as he has had over past opponents? Will his style hold up against the greater experience and fight IQ of Cruz? With all the storylines and the sheer talent involved, this has the potential to be a classic fight for the bantamweight division.