Carlos Condit got the last word at UFC 143. | Photo: Sherdog.com


A few weeks before his bout with Nick Diaz, Carlos Condit reflected on the art of hype in mixed martial arts. For some fighters, like Chael Sonnen, it comes carefully and cleverly scripted, a premeditated design on drawing attention. For others, like Diaz, it comes out as a fascinating stream-of-consciousness barrage, without much thought given to whom or what his words might influence.

When Diaz called out Georges St. Pierre for being “scared” after beating B.J. Penn at UFC 137 in October, it allowed Stockton, Calif.’s resident bad boy to leapfrog Condit for a title shot, per St. Pierre’s request. Even after a series of public relations mishaps, it appeared the squeaky wheel had once again gotten the grease, although St. Pierre would eventually withdraw from the bout after suffering another knee injury.

“[Outspoken fighters] promote fights. They do get fans interested -- a certain segment of the fan base,” Condit admitted, “but I think you’ve got to be yourself. If that’s you, be you, but that’s not me, so I’m gonna be myself.”

Fast forward to the first week of February -- Super Bowl week -- and perhaps the ultimate seven days of overblown pomp and circumstance in American sports culture. Fittingly, Condit was in the background once again, but the Giants and Patriots had nothing to do with it. St. Pierre had stolen the show in his appearance on the second episode of the UFC’s masterful “Primetime” series, his rehabilitation sessions clearly motivated by a future date with Diaz.

Many people followed the welterweight champion’s lead and began looking ahead to a potential showdown between St. Pierre and Diaz. Meanwhile, Condit remained poised and claimed the speculation did not bother him. The task at hand -- beating Diaz -- was more than enough to occupy his mind. The son of a politician, Condit has clearly learned the value of choosing his words carefully. Sometimes knowing what not to say and when not to say it is just as important as being able to hold court with a microphone.

At UFC 143 on Saturday in Las Vegas, the “Natural Born Killer” let his skills inside the Octagon do the talking in capturing the interim welterweight belt. For the majority of five rounds, Condit utilized movement, angles and well-timed strikes to keep Diaz off balance and out of rhythm. The three cageside judges rewarded Condit for his efforts: Cecil Peoples and Patricia Morse-Jarman saw it 49-46 in favor of the Jackson’s Mixed Martial Arts product, while Junichiro Kamijo scored it 48-47.

Judging by the boos coming from the 10,000-plus in attendance at the Mandalay Bay Events Center, not everyone agreed. On the Internet, plenty of dissenting views surfaced, as well, deriding Condit for allegedly running away from combat. And, of course, there was Diaz himself, who for all intents and purposes announced he was taking his ball and going home.

“I don’t need this s---, you know? I pushed the guy backwards the whole time. He ran from me the whole fight,” he added. ‘I landed the harder shots. He kicked me in my leg with little baby leg kicks the whole fight. If that’s the way [the judges] understand that you win in here, I don’t want to play this game no more.” 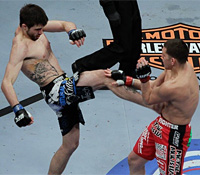 Sherdog.com
Diaz made few adjustments.
Even in defeat, Diaz somehow managed to overshadow Condit with his mini-tirade; despite the fact that Condit outstruck him in every round but one; despite the fact that Diaz’s career average of 6.03 significant strikes landed per minute fell to 4.2 during the five rounds he was in the cage with Condit.

Diaz might not want to acknowledge leg kicks as a viable weapon, but when someone lands 68 of them over the course of a fight, an adjustment might have been warranted. Coming in to UFC 143, it was no secret that Evangelista “Cyborg” Santos had experienced some success by attacking Diaz’s lead leg in their 2011 encounter.

It was also understood that sticking to such a game plan with Diaz continually pressing forward would be easier said than done. Condit made it work.

The criticism saying Condit fought scared is unfounded. Many an opponent has met a brutal demise with his back to the cage as Diaz -- the best body puncher in MMA -- fired off rapid-fire combinations. Circling and moving back to the center of the Octagon is simply good strategy.

Those who expected an all-out brawl have not been following Condit’s career closely. The New Mexican is a superb tactician who alters his approach based on the situation: Fight IQ and awareness are his greatest assets. When he needed a fantastic finish to beat Rory MacDonald at UFC 115, he went all-in. His knockout of Dan Hardy was beautifully timed. When many expected him to spend the majority of his UFC 132 meeting with Dong Hyun Kim on his back, he proved the doubters wrong by getting to his feet and dropping the Korean with a flying knee.

Those were Condit’s most recent victories, but he and his team knew he would have to evolve to beat Diaz. The chances of knocking out the former Strikeforce 170-pound champion -- who had only lost once due to a non-cut-related stoppage in 33 fights -- were slim and none. Condit also learned from watching Jackson’s MMA teammate Donald Cerrone’s performance against Nate Diaz at UFC 141, where Cerrone was overwhelmed by the sheer volume of his opponent’s punches. Going toe-to-toe with Nick Diaz, a more refined version of his younger brother, would be a recipe for disaster.

So, Condit fought with intelligence, patience and poise. When Diaz attempted to bait, taunt and intimidate, Condit remained focused. He might not have fought as expected, but a true mixed martial artist never does. He flashed a style that invoked comparisons to the likes of Floyd Mayweather Jr., Dominick Cruz and Lyoto Machida. All are sound defensive strategists who have been criticized at various times for their methods, but all have been -- or are -- champions.

Now, criticism be damned, so is Condit.