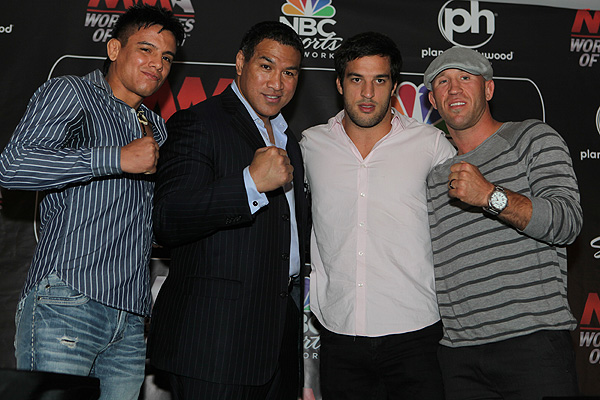 A great orator he is not, but Ray Sefo, newly minted president of the upstart World Series of Fighting promotion, has only the most noble of intentions.

“We look to put the fans and fighters first and to promote the best events,” Sefo said during a press conference last week.

Make that “event,” in the singular form, at least for now. Sefo’s first gaffe as head of the fledgling organization was to announce that the WSOF had signed a one-year contract with NBC Sports, with plans to hold eight to 10 events over the duration of that deal. Not so fast, replied the network.

A day after the press conference, an NBC representative told MMAFighting.com that its current agreement with the promotion is for one night only. After the Nov. 3 debut, everything will be evaluated and examined to determine how to best move forward. In theory, if NBC Sports is not happy with the product, WSOF could be a one-hit wonder. As it turns out, Sefo’s declaration was rooted more in cautious optimism than plain fact. However, the former K-1 standout stands by his announcement that WSOF has a one-year deal with NBC Sports.

Despite the mix-up, Sefo has reason to feel good. Even if it is just on a trial basis, it is a big deal for a brand new MMA promotion to be linked with such an established network. Although NBC Sports is not new to the fight game -- it previously broadcast World Extreme Cagefighting events when it was known as Versus -- the NBC name tends to resonate more with the masses. File Photo
Torres is one of the WSOF centerpieces.
In hopes of making a splash with its initial event, WSOF has put together a solid lineup of recognizable names: Miguel Torres, Gerald Harris, Gesias “JZ” Cavalcante, Josh Burkman, Ronys Torres and Bobby Lashley, to name a few. This by itself is not unique.

Organizations such as One Fighting Championship, ProElite, Shark Fights and Super Fight League have assembled their own collections of notables for various events. None of the aforementioned promotions had or have anything resembling a major television contract, however, which is why the stakes will be so high for WSOF in November.

Rumor has it that the promotion has been quite generous with its contracts, and it had to be in order to acquire the type of name value necessary to please the network suits. Following the Bellator Fighting Championships model of building relatively unknown prospects through tournaments would have been ideal -- and probably cheaper -- but the presence of NBC is a game changer.

“For me, it’s a new future, it’s a bright future. Being on NBC Sports is a huge thing for me and a big deal for all of us,” Torres said. “It was the best decision for me to come here. I’m happy with the way things worked out.”

It has to feel like a new lease on life for Torres, who was knocked out by the fast-rising Michael McDonald in his last UFC appearance. Torres is a few years removed from a 17-fight winning streak that brought him the WEC bantamweight title and inserted him into discussions regarding the world’s best pound-for-pound talents. He has declined since then, posting a 3-4 record and attracting more attention for his Twitter feed than his feats in the cage.

Still, the WSOF is counting on Torres to carry his weight as a headliner. It is counting on the likes of Harris, Burkman and Cavalcante to reach greater heights than they did with their previous, more well-known employers. It is counting on Lashley to be more than just an imposing physical specimen with a sports entertainment background.

To keep those guys coming back and to attract more talent for future shows, Sefo hopes to maintain a good relationship with his athletes. If offers start to pour in from other promotions or other contractual issues arise, he will allow his fighters to explore their options. Sefo, a longtime professional kickboxer with some MMA experience, is well aware of the hardships one must endure to survive in this profession, so it is not surprising that being fair to the fighters is among his foremost goals. How realistic that is remains to be seen.

“I understand the goal for every fighter out there is to get to the UFC. And so they should, as it’s the beast of the MMA world right now,” Sefo said. “But we’re not focusing on that. We’re focusing on what we bring to the table, which is creating more opportunities for fighters.”

For those opportunities to remain plentiful, Sefo and the WSOF must impress NBC Sports and a legion of fickle MMA fans on Nov. 3. It will not be easy, especially considering that it will be going up against a Strikeforce card featuring the likes of Daniel Cormier, Frank Mir and Luke Rockhold. Sefo is confident that enough fans will choose his product. It is on free TV, after all. Where the WSOF goes from there is anybody’s guess.

A TV deal with a big-time network, a recognizable cast of fighters and a passionate president is not a bad start. Mistakes are inevitable in a new organization, as Sefo himself has already demonstrated. Let us just hope the WSOF does not crash and burn before it truly gets off the ground. It is only fair to the fighters and fans that it gets a chance to succeed.