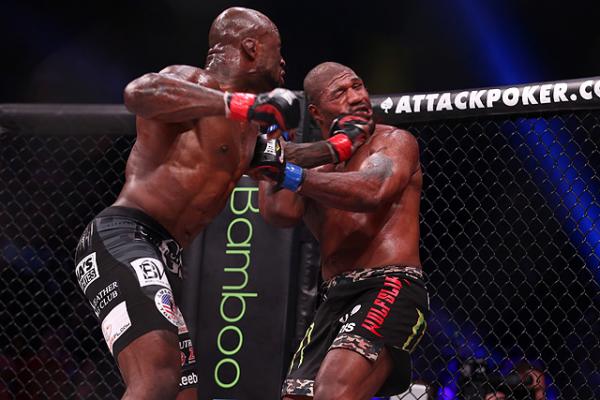 
Bjorn Rebney was in vintage spin-doctor form last week, with Bellator MMA’s second attempt at holding its inaugural pay-per-view on the brink of disaster once again.

“We had an utterly spectacular show, and now we’ve got a spectacular show,” the Bellator CEO said during a conference call announcing that Will Brooks would replace the concussed Eddie Alvarez at Bellator 120.

Normally, a downgrade from “utterly spectacular” to “spectacular” is not a big deal, sort of like having a supermodel girlfriend find out she was only getting the Maxim cover instead of Sports Illustrated; or learning the 65-inch flat screen, not the 80-inch, will fit your entertainment console; or the delivery guy getting your pizza order wrong only to come through with a free side of breadsticks and wings.

Losing one-half of a centerpiece fight that was the sole reason for even the most devoted of fans to spend money on something they usually receive for free, however, hardly fits those parameters. Yet Rebney turned out to be more right than he knew -- maybe just not in the way he imagined.

While final buy rates are more than likely to be disappointing, Bellator’s first foray into pay-per-view will be indelibly etched into the minds of those who did decide to watch. Some things -- like Michael Page’s Dance Dance Revolution turned MMA routine, Frank Shamrock’s “Back to You” interview face and Tito Ortiz’s cringe-worthy Hulk Hogan impersonation -- you just cannot forget. That was just the tip of the iceberg.

The Landers Center in Southaven, Miss., served as a carnival to the bizarre on Saturday, beginning at the conclusion of the Spike TV portion of the card, when Muhammed Lawal declared, “I came out here to beat [Quinton] ‘Rampage’ [Jackson] and stop all the d--- riding Bjorn be doing.” The interview promptly ended there, due to a dubious claim of “technical issues.” Lawal made sure there was no misunderstanding when the interview was resumed moments later.

“I ain’t no groupie. I ain’t Bjorn Rebney. To Bjorn and them, [‘Rampage’] might be God, but to me, he’s another fighter,” he said. 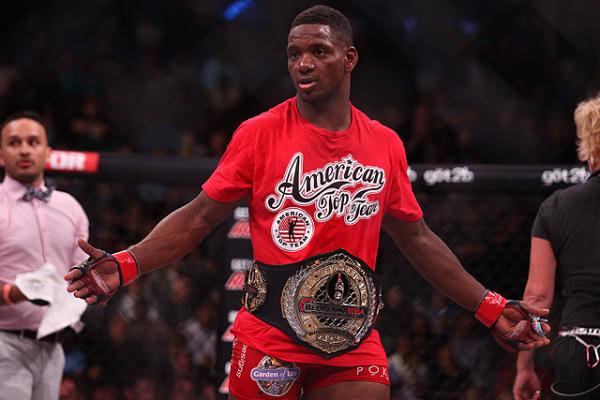 Photo: D. Mandel/Sherdog.com
Brooks played spoiler.
So began a night of things not going exactly as Bellator had planned. While Lawal’s venom toward Rebney only reaffirmed that the promotion figurehead might not be the most popular guy around, it also prompted a rash of Internet speculation that Rebney might be a Bellator short-timer if the Viacom suits get their way. Whether that turns out to be true or not, whoever ends up running the show will have some interesting maneuvering to do in the coming months.

Bellator 120 was centered on three key bouts: Ortiz-Alexander Shlemenko, Brooks-Michael Chandler and Lawal-Jackson. Only one of those turned out the way it was supposed to, and even that was a little bit messy.

When Shlemenko, the promotion’s middleweight champion, expressed a desire to go up in weight to face Ortiz, whose neck injury destroyed Bellator’s original pay-per-view dreams in November, it was viewed as a freakshow pairing -- old-school Japanese matchmaking at its finest. It was also a chance to build Shlemenko, an entertaining but largely unknown Russian talent, on the back of Ortiz’s considerable name. Shlemenko’s task seemed simple: Throw some spinning [expletive], knock out the past-his-prime star and get some fans. Instead, the former “Huntington Beach Bad Boy” submitted Shlemenko with an arm-triangle choke in less than three minutes.

Ignore the conspiracy theorists who claimed Ortiz was whispering something to Shlemenko as he applied the submission. Bellator had much more to gain by having Shlemenko win. As recognizable as he may be, Ortiz remains one catastrophic injury away from a second retirement. The consolation prize is that Bellator still has Ortiz around to say Tito Ortiz things.

“God put me on this earth to be a tool,” the former Ultimate Fighting Championship titleholder proudly proclaimed at the post-fight press conference. While that might be a little out of context, you get the idea.

More than anything else, Bellator 120 was expected to serve as a preamble for the Chandler-Alvarez trilogy, which was delayed when Alvarez suffered a concussion in training. All the Dave & Buster’s pitchman had to do was dispatch Brooks, a stopgap foe, for the interim lightweight title and voila, Bellator would have a ready-made headliner for its inevitable sophomore pay-per-view venture.

Much in the way that Chandler crashed the party in his initial meeting with Alvarez nearly three years ago, Brooks would spoil the best laid plans, taking a hard-fought -- and somewhat contentious -- split verdict over Bellator’s most marketed talent. It is worth noting that Brooks was also the one who called anyone doubting Bellator 120’s viability as a pay-per-view commodity a “fool.” As the co-author of the event’s best actual fight, “Ill” Will would have been justified in offering an “I told you so” by night’s end.

As for Chandler-Alvarez 3, it might not be dead yet, but the path to get there is suddenly a lot more complicated, although Alvarez’s contract apparently allows for him to demand a fight with Chandler next. With that in mind, it would not be shocking if Chandler somehow bypasses the so-called Toughest Tournament in Sports to remain firmly in the mix.

Of course, everything concluded with Lawal-Jackson, a contrived feud borne out of the need for star power in a talent-starved division. While the actual fight between “King Mo” and “Rampage” was far from memorable, the combination of the sports-entertainment storyline, Lawal’s sudden animosity toward Rebney and a controversial verdict rendered in favor of Jackson on his home soil made for undeniably interesting theater.

Again, things could have turned out better for Bellator. Where a patented Rampage knockout would have been ideal, instead we are left with ambiguous direction at light heavyweight. Despite earning the title shot, Jackson appears disinterested in fighting champion Emanuel Newton, and the masses are hardly clamoring for a rematch with Lawal, even if the allegedly bitter rivals seemed open to the idea in the aftermath.

Perhaps the stars have aligned for the much mocked and maligned Ortiz-Rampage meeting after all. At this point, it almost seems like the most Bellator thing to do.

Maybe you were not fool, like Brooks said, if you did not drop $45 to watch Bellator 120. However, you definitely missed out on a little slice of MMA history. Spectacular? Maybe not, but Bellator’s first-ever pay-per-view was completely, undeniably and utterly -- yes, utterly -- unforgettable.