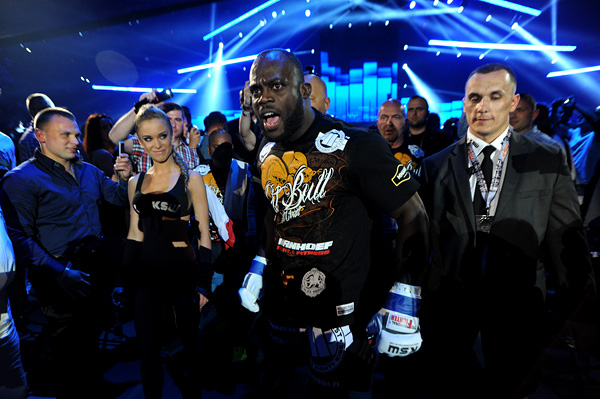 
Melvin Manhoef and Doug Marshall by themselves are powder-keg ingredients. Mix them together, and a recipe for something sensational arises.

Manhoef will make his Bellator MMA debut in the Bellator 125 main event on Friday, as he faces off with the former World Extreme Cagefighting champion at the Save Mart Center in Fresno, Calif. Most expect their encounter to be brief, decisive and extraordinarily violent.

A onetime Cage Rage titleholder, Manhoef threw the brakes on a two-fight losing streak in April, when he stopped Evangelista Santos with punches just 46 seconds into their long-overdue rematch under the Gringo Super Fight banner in Rio de Janeiro, Brazil. The 38-year-old Suriname-born Dutch kickboxer has established himself as one of MMA’s most efficient knockout artists, as he has secured 26 of his 28 professional victories by knockout or technical knockout. Manhoef’s list of victims includes Ryo Kawamura, Denis Kang, Kazuo Misaki, Mark Hunt and Kazushi Sakuraba. However, he has never won a fight in three appearances on American soil.

Marshall has rattled off four wins in five outings. The 37-year-old Visalia, Calif., native last fought at Bellator 109 in November, when he failed in his bid to unseat middleweight champion Alexander Shlemenko, a body punch from the Russian striker marking the end of the road. To worsen matters, Marshall later tested positive for a banned substance and was subsequently suspended by the Pennsylvania State Athletic Commission. A potent and aggressive standup fighter, “The Rhino” sports 13 first-round finishes among his 18 career wins.

In addition to the Manhoef-Marshall headliner, here is what to watch for at Bellator 125:

THE YOUNG AND THE RESTLESS


Goiti Yamauchi has surfaced as one of Bellator’s most promising young talents, though a hiccup against Will Martinez in February gave the MMA world pause.

The 21-year-old Brazilian jiu-jitsu black belt bounced back at Bellator 120 some three months later, as he captured a unanimous decision over Mike Richman at the Landers Center in Southaven, Miss. Yamauchi will seek his 13th victory in 14 appearances when he confronts “The Ultimate Fighter” Season 9 finalist Martin Stapleton in a featured featherweight scrap at Bellator 125.

Stapleton, 31, has lost two of his past three fights. However, the Englishman righted his ship in June, when he submitted Stanislav Enchev with a first-round guillotine choke at a Full Contact Contender show. 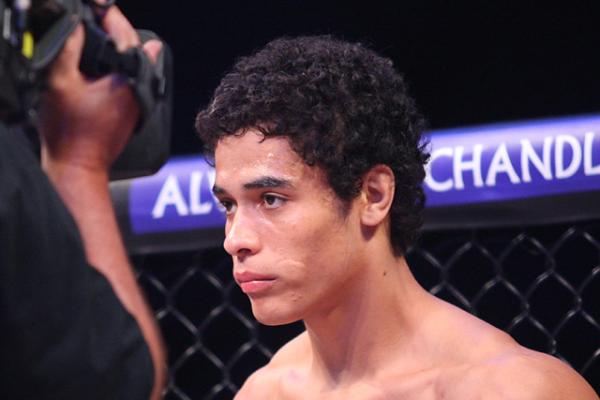 Renovacao Fight Team prospect Julio Cesar Neves Jr. will put his gaudy professional mark on the line, as he returns for his sophomore appearance inside the Bellator cage and takes on reigning two-division Tachi Palace Fights champion Poppies Martinez. “Morceguinho” has finished 26 of his 29 victories, 18 of them inside one round. The 20-year-old luta livre practitioner made his promotional debut at Bellator 117 in April, when he put away Josh Arocho with second-round punches and elbows at the Mid-America Center in Council Bluffs, Iowa.

Martinez, 31, is 10-2 over his last 12 outings. He has not competed since he succumbed to first-round punches at Bellator 122 in July.

Butler won a national Golden Gloves championship in 2004 and owns a 35-12 record as a professional boxer, so it should come as little surprise that the Chicago native has excelled in the standup in MMA competition. Undefeated in nine appearances, he has finished three of his eight wins in 64 seconds or less. However, Butler experienced his first legitimate brush with mixed martial arts adversity in May, when he fought journeyman Nick Rossborough to a majority draw at Bellator 119. He was never the same after absorbing a left hook in the first round, as he abandoned his hands in favor of takedowns and a stifling top game over the final 10 minutes.

The next challenge for Bulter takes the form of Javy Ayala, a Tachi Palace Fights alum who will enter their matchup on the strength of back-to-back stoppages against Thiago Santos and Eric Prindle.


Prospect watchers have their eyes on Chris Honeycutt.

The 26-year-old old North Ridgeville, Ohio, native was a two-time NCAA All-American wrestler and 2012 NCAA finalist at Edinboro University, where he ranks sixth on the school’s all-time list in winning percentage (.855) and seventh in career wins (130), two ahead of Josh Koscheck. Operating out of the Dethrone Base Camp, Honeycutt has finished three of his first four opponents since shifting to MMA, capturing gold within the UPC Unlimited promotion in the process.

Honeycutt will dip his toe in Bellator waters for the first time against Aaron Wilkinson, an Englishman who reached the quarterfinals on Season 12 of “The Ultimate Fighter.” Wilkinson, 27, last competed under the Cage Warriors Fighting Championship banner in October, when he dispatched Bola Omoyele with second-round punches.