China is home to 1.3 billion people.

Is it possible that a gifted Chinese athlete who has been committed to kung fu since pre-adolescence and has blended a modern MMA game can become a paradigm shifter in the sport?

I don’t know, but as of two years ago, almost no one would have responded favorably to that question. After Lyoto Machida’s stunning performance Saturday, you’d likely get far more takers.

As globalization helps the expansion of MMA and the spread of MMA becomes part of globalization, the intersection of cultures, sporting and non-sporting, will produce admixtures in forms nearly impossible to predict at this intersection. But if Machida’s drubbing of Rashad Evans is instructive, it shows that dismissing any new MMA permutation as doomed to failure for being tethered to traditional martial arts is a recipe for unsavory blowback.

Taking a step back in MMA’s history at this intersection provides some potentially intriguing parallels. Royce Gracie’s run through the early UFCs didn’t simply usher in the era of Brazilian jiu-jitsu in martial arts. His performances, both where he dominated opposition who hadn’t the slightest clue how to play jiu-jitsu and those where he showed tactical weakness, in turn gave athletic, accomplished wrestlers (among fighters of other penchants) the impetus to ply the eccentricities of their trade.

For brevity’s sake I am simplifying the historical record, but this is essentially where the chemical reactions began. Catch wrestlers picked up the guard game, strikers learned how to control posture and defend the takedown and wrestlers learned their over-under clinch to set up opportunities for knees, uppercuts and elbows.

Another major transformation, should such a thing actually happen, will likely be far slower than the Gracie jiu-jitsu catalyst remaking the martial arts landscape in 1993. Part of it is that much of the known world is already conquered; there isn’t as much territory left to explore.

Additionally, one must always remember that what the host country of the early UFCs could offer helped eventually mold the product and guide the transformation. There may not be armies of kick boxers within its borders, but America was home to hordes of wrestlers of considerable skill long before Rorion Gracie and Semaphore Entertainment Group toyed with the idea of putting a moat around the Octagon. That wrestling became such an integral component on the modern MMA repertoire speaks as much to its effectiveness as it does to its prevalence on the soil from which the sport got one of its most major lifts. For another martial arts revolution to take place, MMA must be both highly mobile and easily accessible, something that is only now becoming a reality in the world’s richest nation. India will have to wait its turn. 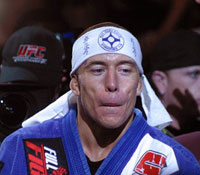 Jeff Sherwood/Sherdog.com
Machida isn't the first
champion to implement
karate in the Octagon.
We also must acknowledge the peculiarities of Machida that make his karate-based style so unmanageable. It is true that the values and precepts underwriting Machida’s Shotokan karate differ from other martial arts, and that fundamentally alters the instincts and in-cage reactions to attacks or even basic tactics from opposition. But Machida is hardly the first MMA practitioner to have a karate background. Numerous professional fighters, both standout (Georges St. Pierre) and one-time UFC veterans (Jeff Newton), have long employed elements of karate as part of their MMA ordnance.

That karate is the obvious dash of cayenne pepper necessary to spice up a flavorless if ingrediently complete MMA dish is not supported by the historical record. Beyond his karate, Machida is an anomaly.

Like superb hitters in baseball, Machida’s “vision” is something to marvel. He is not only able to land with frightening precision, but he sees attacks and the slightest physical tells far in advance of the typical professional MMA fighter. When fighters use Western boxing technique to drive off the back foot as they extend their jab straight forward, Machida often employs split-second timing to close the distance by immediately hopping in, albeit with real estate expertly measured, and attacking simultaneously high and low before his opposition are able to defensively recoil.

He can catch lightening-fast, technical strikers moving in before they even fully extend a jab to the body while following up with multiple punches before they ever have a chance to retract and cover up. Those extraordinarily rare skills are only accrued after decades of diligent practice and cannot reasonably be mimicked by fighters in their mid-20s being introduced to the concepts for the very first time. Perhaps younger fighters in the embryonic stages of their career have more of an opportunity, but the jury is still out.

Therefore, we have a responsibility to remain skeptical about whether the next technical paradigm shift in MMA can even actually happen. Cung Le is assuredly using san shou to his benefit within apparatus of MMA, but Cung Le is no average san shou fighter. Le won numerous national titles in san shou and remains unblemished in his professional kickboxing career. To suggest that Le’s ascendency in MMA is yet more evidence san shou is as applicable to MMA as jiu-jitsu requires a massive leap of faith most are unwilling to make.

We must again remind ourselves that any martial art by itself is no more lethal than it ever was without the help of a more complete skill set. Machida’s black belt in jiu-jitsu and superb ability to clinch break or defend the takedown speak to the keenly understood deficiencies karate still must contend with insofar as MMA’s purposes are concerned.

However, we must also save a place for optimism. First, while other Shotokan karate fighters may not have Machida’s vision or his larger ability to make granular, key adaptations to his karate for MMA, that does not mean individual components of his style can’t be reasonably replicated. Try as they might, attempting to mimic Machida’s timing will only lead to the nullification of the offensive system they’ve developed. But should they choose to incorporate more fragmentary elements that can be woven in without disrupting the overall effectiveness of a fighter’s style, that will only further interest in the applicability of traditional martial arts.

Second, with the spread of MMA throughout geographical areas with homegrown martial arts or unique styles of folk wrestling, we are presented with the possibility that, over time, the combination of MMA’s foundational requirements with the unique fingerprint of unexplored martial arts (from our vantage point) will produce a new MMA Frankenstein with the skills, counterintuitive instincts and expertly honed reflexes even today’s most accomplished professional fighters cannot handle. Like Gracie catching unsuspecting karatekas without any awareness of how to stop his onslaught, a post-modern MMA fighter with inaccessible skills only shared by countrymen could force contemporaries to find ways to add his or her techniques to further their own talents. Or perhaps fighting styles can incorporate so many disparate elements so as to become dynamic to the point of inimitability.

This brave new world also forces one to question when enough is enough. Twenty years from today, how many disciplines will the top MMA fighters be required to master? Will they have to understand wing chun as much as jiu-jitsu? Will single leg sweeps be as requisite in training as palm blocking?

It is difficult envisioning such a strange future, but real revolutions in thought and practice are not those necessarily widely forecasted by accepting practitioners. Sometimes reality smacks one in the face or chokes one into submission, if we are looking for the appropriate metaphor. I’m not one to suggest Lyoto Machida (and the intriguing Jon Jones) isn’t a gigantic wake-up call.

As for what’s next, patience will be necessary as we watch the clash of martial art civilizations. The more comprehensive modern world of MMA could collide with the limited but perhaps tactically useful ancient traditions of aboriginal martial arts. How long that process will take to produce something relevant beyond Lyoto Machida is anyone’s guess, but what might now be more in order in the short run is a wardrobe change.

Karate gis, far thinner than traditional judo or jiu-jitsu gis, and their manufacturers could be on the verge of newfound interest from MMA enthusiasts. And for those with T-shirts adorned with the “Your Kung Fu Is No Good Here” messaging, perhaps your old karate summer camp T-shirts could use some dusting off. Somewhere in Beijing, a young student of kung fu is interested in Art of War shows and preparing himself.

Luke Thomas is the Editor-in-Chief of the MMA blog BloodyElbow.com