Veteran referee Yves Lavigne has no qualms with his decision to stop a lightweight bout between Kyle Bradley and Phillipe Nover last Saturday at UFC 98 in Las Vegas.

Lavigne made a split-second decision to intervene after Nover, the runner-up of season eight of “The Ultimate Fighter,” face-planted the canvas from his knees after “Bradley gave him a good shot on the side of the head.” Lavigne said Nover’s body language told him the fighter was “out.”

However, Bradley continued to press forward on Nover, who recovered instantaneously and flipped to his back to prepare for the oncoming onslaught.

Replays of the sequence showed Lavigne release Bradley and take one step away from the fighters, before re-engaging between them to wave off the bout. The entire fight lasted 63 seconds.

“It was the toughest one to call, because you don’t see the face of the guy receiving the punch,” Lavigne told Sherdog.com Wednesday. “You have to look with the body, so basically, I based my judgment on Mr. Nover’s reaction. When he went face-first in the mat with his arms behind him, I decided to stop the fight.”

It’s the few seconds after, however, when Nover recovered with no obvious signs of trauma and Lavigne appeared to briefly retreat in reaction to it, that has caused criticism. 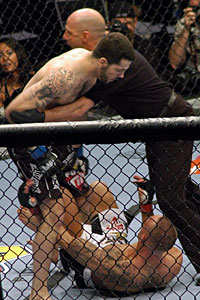 Photo by Sherdog.com
Yves Lavigne faced similar
scrutiny at UFC 96 in March.
Lavigne, who’s officiated combat sports since 1992 and for the UFC since 2006, said his actions were far from indecisive. Lavigne said he re-aligned his position to avoid an incoming upkick from Nover, as well as achieve a better vantage point to stop an unresponsive Bradley.

“I know it looks bad. I know some people on the Internet said I re-start[ed] that fight,” said Lavigne. “I never re-start[ed] that fight. I didn’t want to receive a kick in the face and get knocked out. When the fighter doesn’t really comply, what am I supposed to do? I think the step back was the best way in order to stop the fight.”

Lavigne, 47, faced similar scrutiny at UFC 96 in March, when the Canadian official prolonged a middleweight bashing between Matt Brown and Pete Sell. Lavigne later told The Canadian Press that he let Sell “take a beating for nothing.”

However, the referee was assured of his decision Saturday.

“I don’t think both of them are in the same category,” said Lavigne. “One of them, I made a judgment call and the other one, I made a huge mistake, which I acknowledged. [Nover] bounced back quick, yes, however my decision was already made at that point.”

Nevada State Athletic Commission Executive Director Keith Kizer supported Lavigne’s actions in an email to Sherdog.com on Wednesday. There has been no indication that Nover will try to appeal the referee’s decision.

The Canadian referee said he’s reviewed his performance and will adjust accordingly for his next assignment.

“I would choose a stronger angle when stopping the fight,” said Lavigne, who recalls facing a similar dilemma when his hips were too parallel to Quinton “Rampage” Jackson as the referee struggled to pry him off a comatose Wanderlei Silva at UFC 92 last December. “I’d also do some weight-training.”