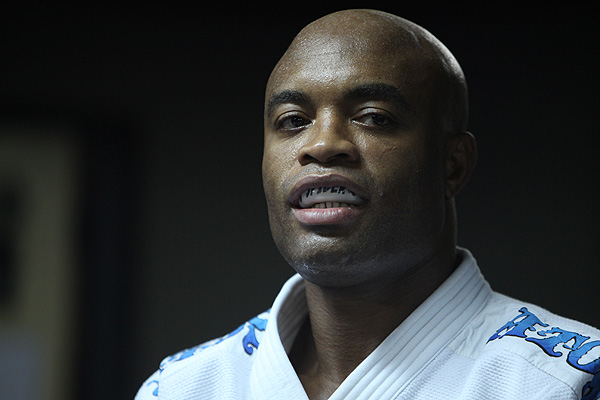 Anderson Silva is through playing coy.

The usually mild-mannered middleweight champion took no prisoners Monday during a UFC 148 conference call, speaking with unprecedented candor about his plans for Chael Sonnen at the July 7 event in Las Vegas.

“It doesn’t matter if I’m on bottom, side or top. Chael Sonnen is going to get his ass kicked like he’s never gotten his ass kicked before,” Silva said through a translator. “What I’m going to do inside the Octagon is something that’s gonna change the image of the sport. I’m going to make sure that every one of his teeth are broken, his arms are broke, his legs are broke. He’s not going to be able to walk out of the Octagon by himself, I can guarantee that. I know he’s listening: The game is over, no more s--- talking. It’s on now.”

One could almost see the MMA media’s collective jaw dropping as the “The Spider” unleashed what amounted to nearly two years of pent-up fury on the call. Even UFC President Dana White, who has presided over bitter feuds such as Tito Ortiz-Chuck Liddell and Rashad Evans-Quinton Jackson during his tenure, was taken aback by Silva’s words.

“What makes this one crazy is I’ve promoted every Anderson Silva fight since he’s been in the UFC, and I’ve never even heard him talk even remotely close to this,” White said. “He usually doesn’t say anything negative [or] disrespectful. I’ve never heard Anderson Silva talk like this.”

Sonnen nearly ended Silva’s title reign at UFC 117, battering the champion over the bout’s first four rounds before succumbing to a triangle armbar in the final frame. Prior to and after that encounter, Sonnen has been unrelentingly vocal in his disdain for all things related to Silva. “The Spider” plans on teaching him a lesson in their long-awaited rematch, which will take place at MGM Grand Garden Arena in Las Vegas.

Silva was a heavy favorite when the middleweights first squared off in 2010. Few expected Sonnen to put up the fight he did, much less dominate Silva like no other opponent in the UFC before him. Silva believes that their UFC 148 clash will resemble their first meeting in final outcome only.

“There is going to be no difference in the end. The first time we fought, he stepped out the loser, and he’s going to step out losing again this time, too,” Silva said. “The only difference this time is he’s going to have to go see a plastic surgeon after the fight.”

“People who live in the past and things that are in the past are in museums. Right now, I’m focused on what’s gonna happen in the next few weeks. Right now, playtime is over. I’m gonna beat Chael like he’s never been beat before. There’s no more talking. I’m going to beat his ass out of the UFC. He’s never gonna want to fight again after I’m done with him,” Silva said.

The abbreviated teleconference ended in less than 30 minutes when both Silva and Sonnen prematurely left the call. Apparently the champion felt that he had gotten his point across.