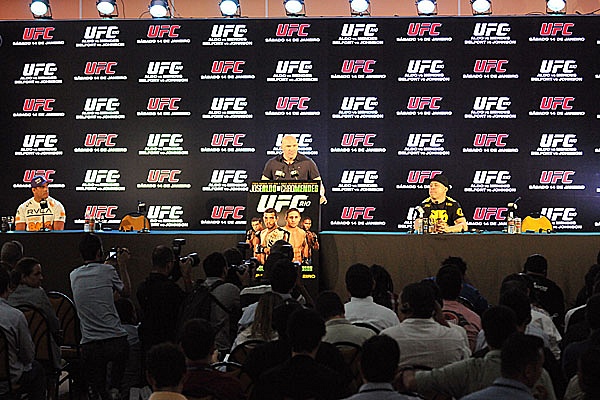 Chael Sonnen will still receive another crack at Anderson Silva, only not June 23 in Rio de Janeiro.

UFC President Dana White (Pictured, file photo) announced Tuesday at a press conference at the Windsor Barra Hotel in Barra da Tijuca that Silva’s clash with Sonnen will no longer serve as the UFC 147 headliner. Instead, the middleweight title rematch will take place two weeks later at UFC 148 in Las Vegas, as originally reported by Sherdog.com on Friday.

“There were many things that caused this fight to fall apart here,” said White. “This is going to be a global event. If we were going to do it here in Brazil, it needed to be done in a huge soccer stadium. As we got into the logistics of trying to make this thing happen here, we just couldn’t pull it off. If we couldn’t do it here, then Las Vegas was the only other option.”

Originally slated to emanate from Joao Havelange Stadium, UFC 147 was expected to break the promotion’s all-time attendance record. The event will still feature a clash of old rivals and current coaches on “The Ultimate Fighter: Brazil,” as Wanderlei Silva and Vitor Belfort collide. White also announced that the show could contain a featherweight title defense from Jose Aldo, despite Aldo’s planned booking at UFC 149 in Calgary.

Additionally, the UFC President confirmed that Mike Russow will square off with Fabricio Werdum at the June 23 show, which will also contain the middleweight and featherweight finals of “TUF: Brazil.” A venue for the event has not yet been confirmed, White said.

Silva and Sonnen initially met at UFC 117 in August 2010. After losing the first four rounds handily, the Brazilian locked up a fifth-round triangle choke to complete his come-from-behind victory and defend his title. Since that time, Silva has defended his title twice more, turning back Vitor Belfort and Yushin Okami last year.

“I’m a UFC athlete, and I have fans all over the world,” said Silva. “Regardless of where this fight takes place, I will represent Brazil, and I will do my job and defend my belt.”

Meanwhile, Sonnen has also earned a pair of victories following his failed title bid. After serving a suspension from the California State Athletic Commission due to his UFC 117 drug test revealing elevated testosterone levels, Sonnen returned to the cage this past October, submitting Brian Stann with an arm-triangle before outpointing Michael Bisping in January at UFC on Fox 2.

“It was disappointing [that the fight was moved], especially the thought of coming to a stadium,” said Sonnen. “I was hoping to be a part of breaking that [UFC 129] attendance record, but I’m going to have to wait and stomp [Silva] on July 7, and that is exactly what I’m going to do.”