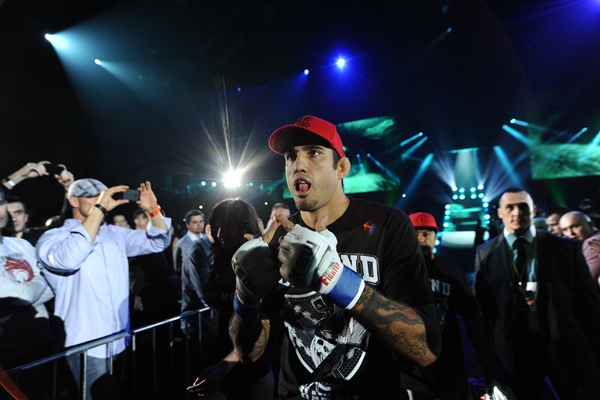 Kendall Grove is set to make his Bellator debut next month. | Piotr Pedziszewski/Sherdog.com


The main card for Bellator 104 is complete.

As previously announced by the promotion, a pair of Season 9 welterweight tournament semifinals will highlight the Oct. 18 bill, as Rick Hawn battles Brent Weedman, while War Machine squares off with Ron Keslar. The eventual winner of the 170-pound bracket receives $100,000 as well as a title shot.

Grove has posted a 6-4 record since parting ways with the UFC in 2011. During that time, “Da Spyder” earned notable wins over the likes of Joe Riggs, Ikuhisa Minowa and Derek Brunson, among others. Most recently, he scored a first-round technical knockout against Danny Mitchell at GWC “The British Invasion: U.S. vs. U.K.” in June. A cast member of Season 3 of “The Ultimate Fighter,” Grove went 7-6 in the Octagon, including victories over the likes of Ed Herman, Alan Belcher and Evan Tanner.

Vedepo, meanwhile, is a two-time veteran of both Bellator and the UFC. The American Top Team product went 2-2 in 2012, falling to Louis Taylor in his last outing at Bellator 84 in December.

Perhaps best known for a pair of foul-marred bouts against Thiago Santos, Prindle seeks his first win under the Bellator banner since he knocked at Ron Sparks in 40 seconds at Bellator 56 in October 2011. “The American Soldier” picked up a win outside the promotion in June, stopping Vince Lucero in 12 seconds at Imperio MMA on June 15.

A native of Sydney, Graham makes his Bellator debut riding a seven-fight winning streak, with each of those victories coming via knockout or technical knockout. His most noteworthy victory during that time came over Aleksander Emelianenko in December 2010.