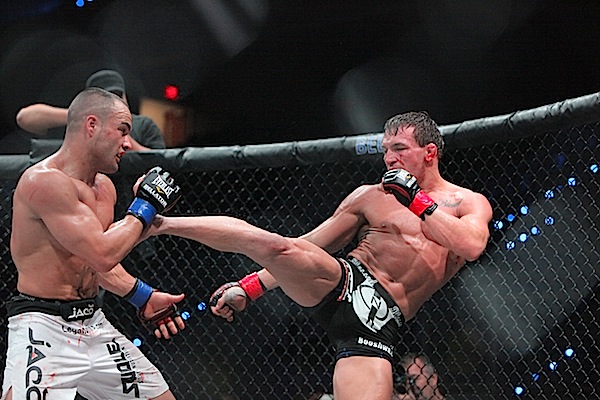 Michael Chandler does not come off as arrogant man.

But after submitting the favored Eddie Alvarez to win Bellator’s lightweight title in a “Fight of the Year” nominee last winter, Chandler isn’t exactly blushing, either.

“I feel like I can't be stopped right now,” Chandler recently told Sherdog.com. “After the way I beat Alvarez -- who was one of the top lightweights in the world -- in my last fight, I honestly almost feel indestructible right now. I am extremely confident.”

Chandler will put that confidence to the test when he squares off with Japanese veteran Akihiro Gono in the Bellator 67 main event tonight on MTV2. Though regarded as a heavy favorite to walk away from Casino Rama in Rama, Ontario, with a victory, Chandler has kept his nose to the grindstone in preparation for his upcoming contest.

“I have trained harder than I ever have before for this fight with Gono, and I am in better shape than I have ever been in my MMA career,” said Chandler. “I am younger, and I am hungrier than Gono. I know he has a lot of experience, but that is going to be his only advantage over me.”

Gono, 37, holds 56 career bouts to his credit ahead of his meeting with Bellator’s lightweight ace. A veteran of both the defunct Pride Fighting Championships and the UFC, Gono began his career in 1994. Though previously an active competitor, Gono will do battle for just the second time in the last 20 months when he faces Chandler. The Tokyo native holds 32 career wins under his belt and has been finished eight times out of 17 professional defeats.

If Chandler has his way, however, Gono will experience his ninth loss by knockout or submission in short order.

“I know I should be able to finish Gono. I am going to wear him down, and I will definitely finish him at some point. Over the course of 15 minutes, I am going break him down and make him give up,” said Chandler. “In my last fight with Alvarez, I was able to land a lot of punches. [I dropped] him twice, and I almost finished him on the feet, so I definitely feel comfortable that I can put a lot of leather on Gono's face.”

Aside from the physical advantages Chandler believes he will hold over his opponent, the champion says he will compete on Friday night with some newfound motivation due to his recent charity work for Friends of Kids with Cancer.

“I met a [nine year-old] kid named Robbie Chandler, [who had battled] bone cancer since he was two. I showed him my belt, gave him a poster, and we watched the Alvarez fight on an iPad. Being able to put a smile on his face was very fulfilling for me,” said Chandler. “A couple of weeks later, I heard that he had passed away, and that had a really big impact on me. It made me decide that I want to make a difference with my position in life.

“[Robbie had] only two years of his life that he wasn't in pain. [Meeting him] just made me realize how blessed I am to be able to do what I love,” Chandler continued. “I feel like if I am not giving back for what God has given to me, then I am not serving my purpose here on this earth.”