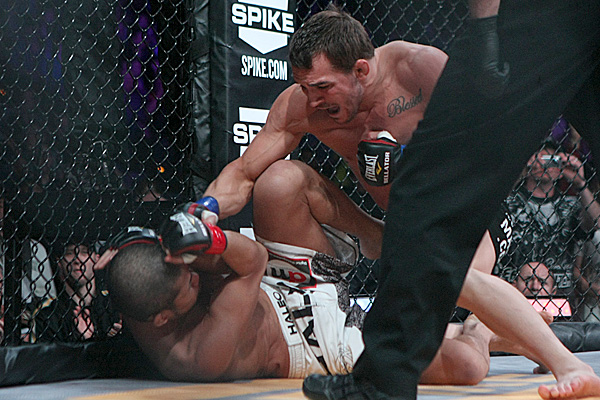 Michael Chandler did not waste any time.

The reigning Bellator Fighting Championships lightweight titleholder took care of Akihiro Gono in less than a minute, as he stopped the well-traveled Japanese journeyman on first-round punches in the Bellator 67 main event on Friday at Casino Rama in Rama, Ontario Canada. The non-title bout was over 56 seconds after it began.

“I’ve got a lot of work to do,” he said. “By no means am I complacent. I promise you I’m going to be the best lightweight in the world, and I’m working towards that.”

Gono, who has lost three fights in a row for just the second time in his 18-year career, was never a factor in the fight. Chandler backed up the 37-year-old from the start, floored him with a clean right hand and closed out another spectacular win with a blinding volley of punches on the ground. 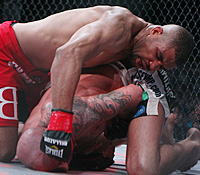 
Bryan Baker ousted UFC veteran Ben Saunders from the Bellator Season 6 welterweight tournament semifinals behind a series of takedowns, a heavy top game and an aggressive standup attack. All three cageside judges scored it for Baker (18-3, 8-2 Bellator): 29-28, 30-27 and 30-27.

Baker overcame a slow start, as Saunders unveiled his tricky submission game, threatening with a flying triangle, an omaplata, a flying guillotine and finally a triangle-armbar. None of his attempts were successful, and Baker grew more and more confident on the mat.

“I’m always confident with submissions,” said Baker, who will face the winner of the Karl Amoussou-David Rickels bout in the tournament final. “I’ve been in a lot of them and haven’t tapped once. I need to work on staying out of them, though.”

Saunders (13-5-2, 4-2 Bellator) lost his way in rounds two in three. Baker tagged “The Ultimate Fighter” Season 6 alum repeatedly on the feet, struck for takedowns, passed guard with surprising ease and unleashed his ground-and-pound with punches and hammerfists. The 26-year-old judo black belt and cancer survivor has won five of his last six fights. 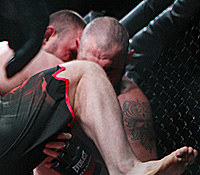 Keith Mills
Grabowski was a leg up on Huckaba.
Takedowns and tepid but effective ground-and-pound carried Damian Grabowski to a unanimous decision over Dave Huckaba in a featured heavyweight encounter. All three cageside judges scored it 29-28 for Grabowski (16-1, 2-1 Bellator), who has pieced together a three-fight winning streak since his failed bid in Bellator’s Season 3 heavyweight tournament.

The 31-year-old Pole struck for takedowns in all three rounds and was the more active fighter on the feet, even though he landed little of consequence. Huckaba (17-5, 0-1 Bellator) was surprisingly passive and failed to capitalize when fatigue took hold of his opponent late in the fight. His hands were heavy, as expected, but his attack was limited to single, sporadic shots. 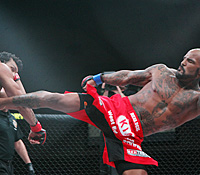 Santos (50-8-1, 2-2 Bellator) fired the first salvo, as he floored his Canadian opponent with a partially blocked kick to the head in round one. However, the Brazilian failed to capitalize fully and allowed Ford to escape to the second round. There, Ford authored his dramatic comeback, closed the distance, lashed Santos’ body with knees and lured the Brazilian jiu-jitsu black belt into the clinch. A brutal knee to the head came next, and Santos fell to the mat, where a series of punches ended it. 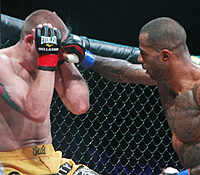 Keith Mills
Cosmo was out of this world.
Muay Thai crossover Cosmo Alexandre put on a striking clinic against Lorawnt-T Nelson, as he cruised to a unanimous decision in a preliminary lightweight duel. Alexandre (2-1, 2-1 Bellator) swept the scorecards by identical 30-27 counts. The one-sided engagement left the previously unbeaten Nelson (4-1, 1-1 Bellator) with grotesque swelling on his left knee.

Alexandre was on his game from start to finish, and although Nelson kept his nose in the fight, the Grudge Training Center export simply lacked the firepower necessary to keep pace. 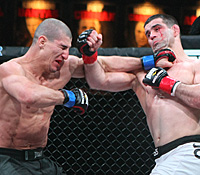 Keith Mills
Taleb pounded out MacGrath.
Tristar Gym representative Nordine Taleb won for the seventh time in as many outings, as he stopped Matt MacGrath on second-round punches in a 180-pound catchweight bout on the undercard. MacGrath (10-8, 0-1 Bellator) met his end 2:30 into round two.

Taleb (8-1, 2-0 Bellator) carved up his short-notice opponent with straight punches through much of the first frame. MacGrath fought back in the second, only to be turned away by a searing left hand. The blow put him on the floor, and Taleb pounced for the finish. The 30-year-old Canadian has not lost in more than four years. 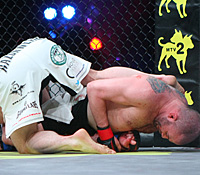 Keith Mills
O'Grady disarmed Gunn.
King of the Cage mainstay Dom O'Grady recorded his fourth consecutive victory, as he submitted Nathan Gunn with a second-round armbar in a preliminary welterweight affair. Gunn (9-3, 0-1 Bellator), badly bloodied from a cut near his left eye, succumbed to the hold 4:51 into round two.

O’Grady (13-4-1, 1-0 Bellator) overcame a couple of takedowns from his Canadian foe, locked in a triangle and transitioned deftly to the armbar for the finish.