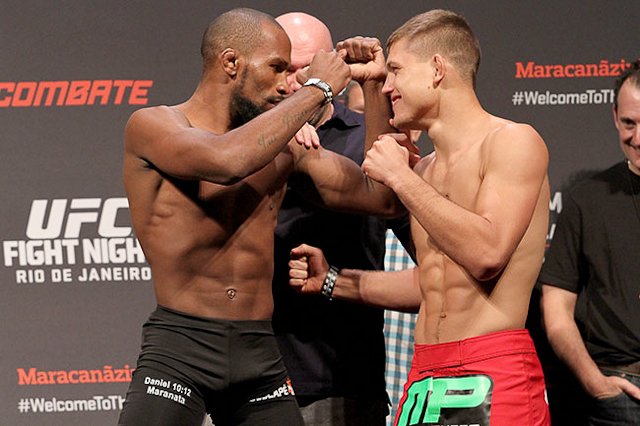 
While Drew Dober has yet to appeal his controversial loss to Leandro Silva at UFC Fight Night “Maia vs. LaFlare,” it is likely that the loss will remain on his record regardless of any future action taken.

Referee Eduardo Herdy determined that Silva submitted Dober with a guillotine choke 2:45 into the second round of their lightweight clash at Maracanazinho Gymnasium in Rio de Janeiro this past Saturday. However, it appeared that Dober, who was conscious and in the process of defending the maneuver, did not tap.

According to the Brazilian MMA Athletic Commission (CABMMA), Dober has not filed a formal appeal, and “the process of reviewing the fight and its result will not officially start until this document is received.” Even then, the odds are not in Dober’s favor.

CABMMA issued a statement to Sherdog.com on Tuesday saying that, at the present time, Dober’s loss does not fall under the guidelines that would allow the decision to be overturned.

“In this sense, as of this moment, CABMMA will not change a decision rendered at the end of any contest or exhibition unless (i) it determines that there was a collusion affecting the relevant result, (ii) the compilation of the scorecards of the judges discloses an error which shows that the decision was given to the wrong athlete, or (iii) as the result of an error interpreting a provision of our rules and regulations, the referee has rendered an incorrect decision,” the statement read.

“The Silva-Dober stoppage does not fall in (i) or (ii), and moreover are not within the scope of (iii) above since it is not based on a misinterpretation of the rules and regulations leading to the result of the bout, but rather on a judgment call of a trained and experienced referee based on Mr. Leandro ‘Buscape’ Silva´s submission, confirmed by Mr. Eduardo Herdy,” the statement continued. “Consequently, there is no action CABMMA can take at this time and the result will be maintained.”

UFC President Dana White clearly does not agree with the commission. In addition to awarding Dober his win bonus, White condemned Herdy’s ruling, calling it “one of the biggest referee screw-ups of all-time” at Saturday’s post-fight press conference.

Chris Nelson contributed to this report.